The results of surveys taken by two polling firms in Argentina and made public on Wednesday, February 23, show Vice President Cristina Fernandez as the favorite among 12 politicians from various backgrounds. On the whole, the Together for Change coalition is leading the polls.

The national pollsters Trespuntozero and the Public Opinion Group (GOP), carried out this consultation to measure voting intentions for Argentina’s presidential elections in 2023. The survey was carried out between February 1 and February 4, using a sample of 1,900 individuals and a margin of error of 2.2%. Six possible candidates from Together for Change (Juntos por el Cambio), four from Everyone’s Front (Frente de Todos), one from the left, and one liberal were selected.

“These surveys do not measure scenarios, but are thermometers that calculate a sense of how the figures and those who are [participating] are aligned,” the director of Trespuntozero, Shila Vilker, stated in an interview.

Cristina Fernandez received 17.5% of voters’ intentions, of the 33% accorded to her party Frente De Todos. Alberto Fernández appears in second place, with 13.7%, almost four points below the vice president. 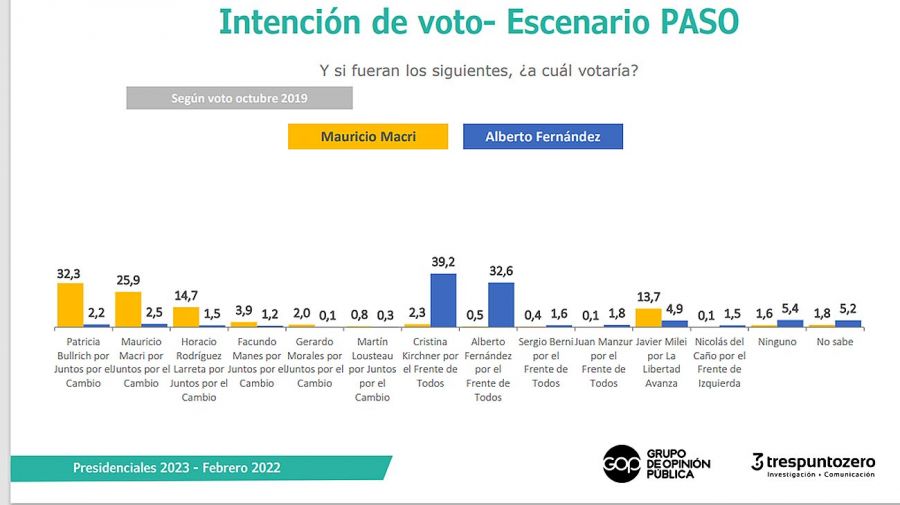 The rest of the candidates included in the survey were very far behind the two leaders. Both the Buenos Aires Security Minister, Sergio Berni, and the Chief of Staff, Juan Manzur, reached 1.1% and 0.8% respectively.