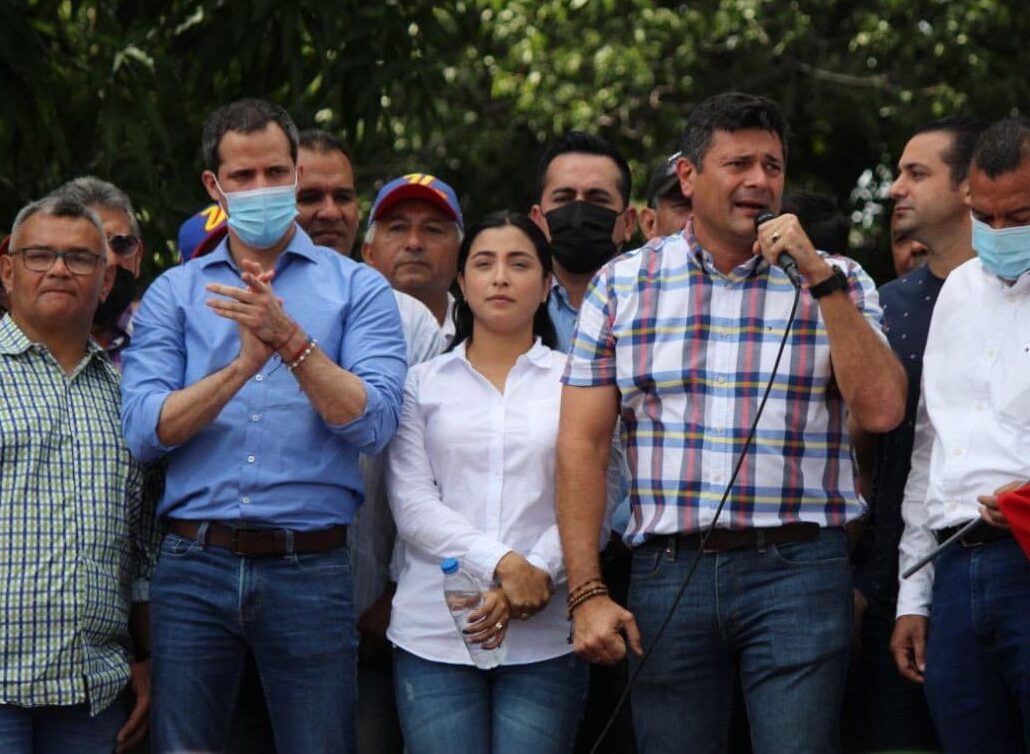 Caracas, December 6, 2021 (Special for OrinocoTribune.com)—Opposition politician Freddy Superlano announced today that the Democratic Unity Roundtable (MUD) has registered Sergio Garrido as its candidate for the governorship of the state of Barinas in the controversial re-election scheduled for January 9.

Superlano’s recent electoral victory was declared invalid by a Supreme Court of Justice (TSJ) ruling last week. The TSJ did acknowledge that he received the most votes, but declared Superlano ineligible for the public position, despite the fact that he was recognized as candidate by the National Electoral Council (CNE), and no complaint was filed with the Comptroller Office about his ineligibility before, during, or after the electoral campaign. Nevertheless, the TSJ concluded that he was never in fact eligible for the post, due to an administrative sanction imposed in August stemming from his work as a legislator between 2015 and 2020. The complaint was filed after November 21 by former opposition deputy Adolfo Superlano (no relation).

“The government tries to silence the rebellious voice of change initiated in Barinas,” Freddy Superlano wrote on Twitter. “Yesterday they inflicted another coup to the popular will, forbidding the candidacy of Aurora.”

Superlano also said that they will not abandon the “democratic path” and that despite all the circumstances they will abide by the decision of the people of Barinas, through the vote.

Sergio Garrido is a local leader of Democratic Action and an elected deputy of the Legislative Council of Barinas.

Claudio Fermín, another opposition candidate for Barinas
The opposition politician Claudio Fermín also announced on Monday that he will run for governor of Barinas as the candidate of the Democratic Alliance opposition coalition for governor of Barinas. “Today I accept the task that the forces of my native land and the parties of the Democratic Alliance have entrusted to me, in a united way, to make Barinas a land of well-being and inclusion,” Fermín wrote on his Twitter account. “Let’s go united for Barinas!”

With his nomination Fermín, who is also president of the Solutions For Venezuela party, promised “a good government, a decent government, an efficient government” and advocated for “an end to hostilities,” which, in his opinion, have weakened “the political environment in the country.”

Unnecessary stain on the electoral system
Many analysts, including Chavistas, have brought attention to the unnecessary controversy created by the intrusion of the TSJ in Barinas’ electoral process, criticizing the court’s decision to declare Superlano ineligible after his candidacy had not been questioned by the CNE when he registered.

Many news outlets have tried to explain the controversy around the Barinas state election for governor as having a basis in the importance of this state as the home state of President Hugo Chávez, but many Venezuelans know that for years the Chavista leadership in Barinas has been unsatisfactory. Thus, for many is hard to understand why, from the high levels of power, this controversial decision was taken.

Thus, the case of Barinas conflicts with the extremely democratic approach shown by President Maduro, who met with the opposition’s new governors in Miraflores palace a few days after the elections. Maduro met with Ramon Rosales from Zulia State, Morel Rodriguez from Nueva Esparta and Alberto Galindez from Cojedes. All the reports on the meeting indicate that it was frank and open.

This weekend Chavismo (PSUV/GPP) also announced former minister for foreign affairs Jorge Arreaza as the candidate to face this new challenge as governor of Barinas. Arreaza is a heavyweight in Venezuelan politics and his appointment only indicates the strong interest of Chavismo to keep control of Barinas, a state that is often considered as a border state, heavily affected by Colombian paramilitary and drug-trafficking activity, even though it does not technically share a border with the neighboring nation. The town of El Canton is less that 80 kilometers away from La Victoria, Apure, where Colombian paramilitary gangs sowed violence and killed more that ten Venezuelan soldiers in March and April 2021.

The electoral landscape became even more complicated after the Venezuelan Communist Party (PCV) announced its candidate for the re-election in Barinas state. PCV is a party that signed political alliances with opposition parties in the recent 21N regional elections and met with the European Union Election Observation Mission (EOM) to complain about the exclusion of some of its candidates. The party is seen by many every day closer to the opposition than to Chavismo.

In a tweet, the PCV announced this Monday that its candidate for Barinas governor is Aldemaro Sanoja, the same candidate the PCV ran for the November 21 elections.

The disqualification controversies prompted CNE Deputy Rector Francisco Martínez to resign this Sunday, a few months after accepting the post. In a public letter, Martínez cited “political disqualifications, judicial interventions which hinder and contaminate electoral processes” as the causes of his decision. He was president of the biggest business association in Venezuela, FEDECAMARAS.