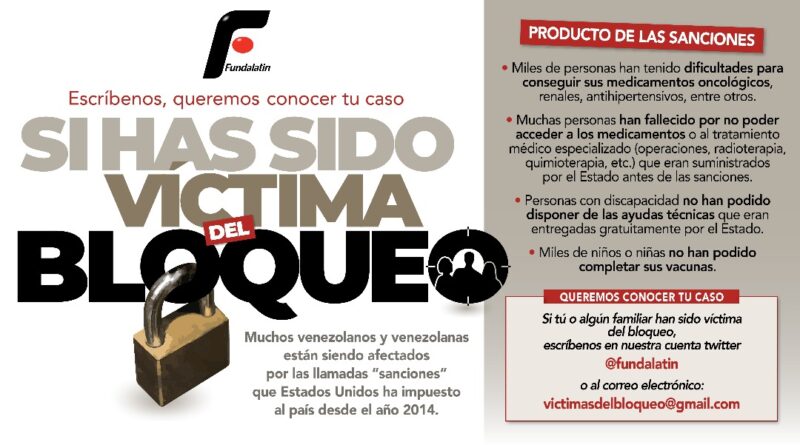 This Monday, June 1, the Latin American Foundation for Human Rights and Social Development (Fundalatin) reported that it continues to present to the Prosecutor’s Office of the International Criminal Court (ICC) new cases of victims of the blockade imposed by the United States and Europe against Venezuela.

According to statements on the NGO’s Twitter account, on Monday 24 additional cases of individuals whose rights were violated as a result of the sanctions were presented. This report included the cases of four citizens who unfortunately lost their lives.

Fundalatin invites Venezuelans who consider that they have been victims of the blockade to communicate with the foundation through social media networks. “Many Venezuelans are being affected by the so-called sanctions that the United States has imposed on the country since 2014,” wrote the organization.

“As a result of the ‘sanctions,’ thousands of people have had difficulties accessing their oncological drugs or antihypertensive drugs, among others,” stated the NGO. “Many people have died due to their inability to access medicines or specialized medical treatment (operations, radiotherapy, chemotherapy, etc.) that were provided by the state prior to the sanctions.”

Finally, the NGO offered its Twitter account (@fundalatin) and email (victimasdelbloqueo@gmail.com) for people to submit their cases for documentation.

Featured image: Poster prepared by Fundalatin asking victims of the US and European blockade to contact them. Photo courtesy of Fundalatin.