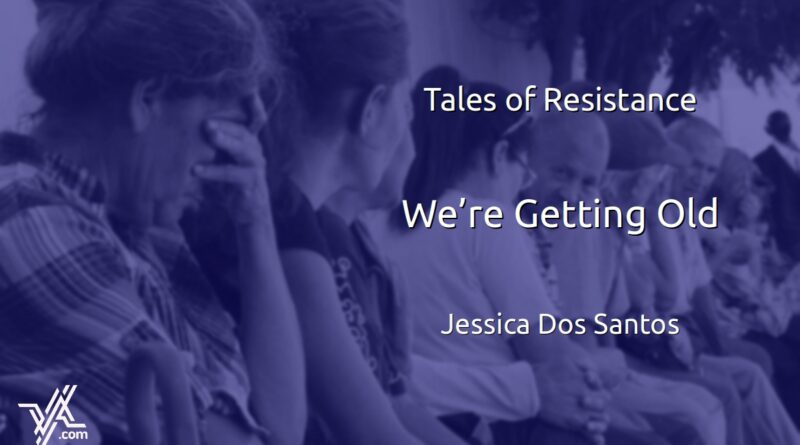 The economic crisis and US sanctions have meant a series of obstacles for Venezuela’s senior population. VA columnist Jessica Dos Santos shares her thoughts and experience on the matter.

In each conversation, each kiss, each hug
There is always a bit of fear.
–Pablo Milanés

A few days ago I was telling a friend that it seemed like all of a sudden every possible family problem was upon me. “We’re getting old, girl,” she told me.

In part that’s true. We’re over 30 and we have to “care” for our parents. But in present-day Venezuela it’s much more than that.

A few years ago, parents/grandparents could live like princes(ses) off of their pensions and as kings/queens if they had worked in the public sector. That money, similar to what any professional worker would earn, allowed them to afford food, medicines and other pleasures like showering grandchildren with gifts.

Nowadays, in contrast, the meager dollars they get amount to a box of pills to lower blood pressure, an ever more frequent ailment of the Venezuelan people.

This comes with an immense frustration for this sector of the population, which besides carrying the weight of their years feels like a burden to their families. This leads to depression, with many suffering in silence so as not to bother anyone, which becomes even worse in the long run. The damage is not just physical.

My 70- and 75-year old neighbors often tell me how frustrating it is to not be able to afford basic things, having to call this or that relative to help with some minor expense, or having to give up on appliances that get damaged over time.

Another consequence is that “extra” or “secondary” expenses, like going to the dentist now and then, have become a luxury. As a result, people don’t just get older, they also look much older.

Many will say, or think, that “this is just some five million people we’re talking about, they’re not the priority” but it’s not as simple as that, since something that affects them has a knock-on effect on the entire family. Sons, daughters, nieces and nephews go crazy conjuring tricks to tend to their needs without looking tired, especially amidst the extra stress of the Covid-19 quarantine. Not to mention that after working their entire lives, seniors deserve to live in peace.

Some of us manage to make things work. In my case, I don’t have kids and I can pay for my parents’ expenses, but would I still manage if on top of that I had to raise a child? What would happen if instead of just one I had both parents with health troubles?

Sometimes the six daily pills my dad has to take eat a week or two of my wages, not to mention the post-stroke weeks when he had to take 13 of them a day. In fact, when the doctor lowered the dosage to nine and then to six my relief was almost as big as my dad’s.

At the same time, the lack of reliable public transportation or basic services, with or without lockdown, makes things even worse. So we always have to be mindful of our elders or go to every pharmacy to find medicines, which in turn limits our own ability to work (in terms of time and efficiency).

All of this without forgetting the old people who are all alone as a result of recent migration. Maybe we are not grasping the full picture yet, but the damage it does to elders makes prospects much bleaker. It’s a cocktail that generates more chronic unattended illnesses (hypertension, diabetes, etc.), raises stress levels, anxiety and labor exploitation. This, in itself, is a recipe for long-term issues. And we’re just focusing on the elders here. Children also have their development hampered. They are forced to grow up and mature quicker.

I often remember what an uphill battle it was to get Venezuelan children to grow and gain weight, and how that was immediately reflected on their school performance. There’s a popular refrain that says “you have to eat in order to think” and there is no doubt about it. I know it because I worked closely in these social programs. The joy at that time now becomes a sadness knowing that indicators like child nutrition are down again. I fear how this will also hold true for other healthcare aspects and worry about the long-term consequences.

What we’re going through is not the aftermath of a natural disaster. It can sound like a country enduring a war, and the truth is that we’ve had a war unleashed on us because we proposed a model that jeopardized yankee hegemony. There are plenty of things we could say about the project’s current direction and the circumstances that have changed, but the war goes on and we resist at a great cost. Let’s hope it’s worth it.

Featured image: In her latest column, Jessica Dos Santos reflects on the challenges elders and their families face in present-day Venezuela. (Venezuelanalysis)