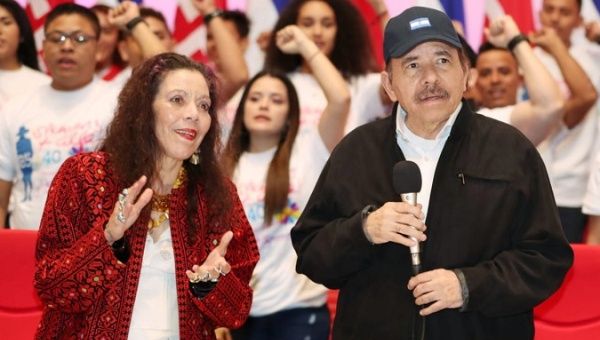 Central American leftists movements also issued a proclamation “in defense of the principles of independence, sovereignty and self-determination, in solidarity with our brother people,” of Venezuela.

The Nicaraguan President Daniel Ortega has called for peace in Latin America and warned the United States against a war on Venezuela. during an official act commemorating the 85th anniversary of the death of Augusto C. Sandino, the nation’s national Hero.

“We salute Venezuela that clearly fights for peace, in a commitment that has its foundations in the spirit and conviction of our Latin American and Caribbean peoples, and so we ratify it on the 85th anniversary of [Sandino] our ‘general of free men’,” said Ortega during the ceremony.

According to the Nicaraguan president, Latin America has spoken up against war and against intervention on its territory and called for a peaceful solution in Venezuela. “Beyond their political positions, countries have said that they are not in favor of intervention or war. There are some agreements that have to be worked on and initiatives to be developed to find a solution through peaceful means in Venezuela.”

Central American left-wing parties have been meeting in Managua, Nicaragua’s capital, for the last three days and were also part of the commemorations of Sandino’s anniversary. These leftists movements also issued a proclamation “in defense of the principles of independence, sovereignty and self-determination, in solidarity with our brother people and the constitutional and legitimate government of our fellow President, Nicolas Maduro.”

During the meeting, the left-wing parties highlighted that the Venezuelan Bolivarian process, that has backed important revolutionary social transformations in Latin America, is under an “interventionist siege of U.S. imperialism,” that is threatening a military invasion that would end peace in the region.

“Given the dangerous situation to which the irrational onslaught of the enemies of humanity has led us, we appeal to the political forces and social movements of the world that oppose imperialist hegemony, to express themselves and mobilize by appealing to mechanisms of struggle aimed at stopping the war that threaten our peoples with genocide, destruction and looting “, the proclamation highlights.

The United States National Security Advisor John Bolton stated, on Wednesday, through his official Twitter account that the government of Nicaragua, headed by Daniel Ortega “has its days numbered,” according to what U.S. President Donald Trump had said on Monday.

Several White House officials have been attacking Venezuela, Cuba and Nicaragua for years and their offensive has been intensified lately. U.S. President Trump has stated on several occasions that military intervention is “on the table,” against these countries, especially against Venezuela.