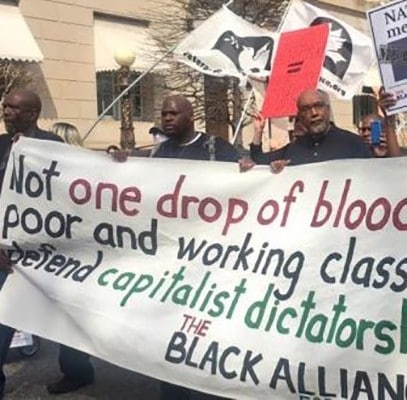 Note: The following interview with Ajamu Baraka, national organizer of Black Alliance for Peace, was conducted on January 26, by Alan Benjamin, editorial board member of The Organizer newspaper. It is reprinted from Issue No. 149 (January 31, 2020) of the weekly newsletter published by the International Workers Committee Against War and Exploitation

Question: Could you tell us about the January 25th Global Day of Action Against the U.S. War on Iran and why the Black Alliance for Peace not only participated but played a leadership role in building this antiwar protest:

Across the country, people came out to say “NO U.S. War on Iran!” — including NO to the U.S. sanctions against Iran that are killing Iranian women and children daily — and to demand that the U.S. government withdraw all its troops from the Middle East.

Ajamu Baraka: It was a positive development to see that people came out across the United States in the tens of thousands to express their opposition to the war on Iran by the Republican Party, led by Donald Trump, and by the Democrats, who, though they expressed concerns about some of Trump’s recent actions against Iran, have been stalwart supporters of U.S. imperialism’s permanent war agenda all along.

In rally after rally, speakers talked about the fact that the U.S. has become a rogue nation (actually it has always been a rogue nation, but now it is even more so) as a consequence of the decision by the Iraqi parliament to demand that the U.S. withdraw its troops from their nation. In response, the U.S. has said, basically, that they are not going to abide by the decision of the Iraqi parliament — which means that those 5,000 U.S. troops in Iraq will now be war criminals if they engage in any kind of military action against the Iraqi population.

The Black Alliance for Peace was proud to be in the forefront organizing this Day of Action. We know that to be effective, this resistance has to have a core element — and one of the most important core elements of anti-imperialist resistance in the U.S. has been the African American community.

We have spent the past two-and-a-half years strengthening this core as a means of reviving and rebuilding the broader antiwar and anti-imperialist movements in the U.S.

Question: Tell us about the war here at home on Black people and why this question is such an important component in building a fightback movement against the war, but also against an economic system — the capitalist system — that daily fosters more wars, devastation, racism, exploitation, and other such scourges.

Ajamu Baraka: Part of our mission as Black anti-imperialist internationalists is, in fact, to make those connections between the U.S. and Western European imperialists’ war agenda, and the war being waged against Black working class people — and against the working class in general — in the U.S.

The permanent war agenda requires support from the public as well as containment of any and all forces opposed to their agenda. This is what’s behind the increased State repression against working class Black and Brown people, in particular, in the U.S.

Different government agencies are responsible for militarizing the police forces across the country. We’ve seen an uptick in the training of U.S. police forces by the Israeli government. We believe that it’s important for people to know about these developments and to connect what’s going on domestically with the ongoing permanent war agenda worldwide. For African people this means, in particular, looking at the U.S. wars launched on the African continent with the creation and expansion of the U.S. Africa Command (AFRICOM).

We see the antiwar issue as an issue of national oppression, just as we see it, of course, as a class issue. We say to our friends and colleagues, and to our people: Not one drop of blood from the working class and the poor to defend the interests of the capitalist oligarchy!

Question: Now to change the arena of the anti-imperialist struggle: Many of us are very worried about a ramping up in 2020 of the U.S. imperialist aggression against the democratically elected government of Nicolas Maduro in Venezuela — an aggression that has the full support of the Democratic Party. You have monitored events in Venezuela closely. Do you think there is an increased threat to Venezuela, especially during this election year?

Ajamu Baraka: The Black Alliance for Peace has been very clear about where we stand in relation to the situation in Venezuela. We have issued many statements and been in the streets in the forefront of the resistance against the imperialist targeting of the Venezuelan project.

We see Venezuela as a country under continued threat. In fact, the threat has increased with the European trip of fake president Juan Guaidó, who has been meeting with European heads of State in Davos. I believe there may be another attempt to try and install this puppet right-winger in Venezuela.

We also have been clear about our essential task to educate people in the U.S. — particularly Black folks — about the reality of Venezuela and the bipartisan effort in this country to undermine the Venezuelan project. We point out that one of the core communities of support for the Bolivarian process has been Black folks. We also point out that 40,000 people have died in Venezuela as a result of the sanctions, a disproportionate number of them Black people.

We also are saying that those politicians in the U.S. who pretend that Black Lives Matter and that police violence must be stopped are, in fact, phonies if they support the recent U.S.-made coup in Bolivia, or the ongoing war and sanctions in the Middle East, or the U.S. intervention in Venezuela, or the attacks against Libya. We tell Black folks that these people are not your friends, they’re your enemies.

Question: Tell us about the upcoming national conference of the United National Antiwar Coalition (UNAC) and the effort to defend the four Venezuelan Embassy Protectors, who now face serious criminal charges.

Ajamu Baraka: The UNAC coalition — of which I am a member of its leadership — is organizing a national conference in New York City on February 21-23. A focus of our work will be to strengthen the anti-imperialist component of the antiwar movement.

We will be highlighting the threats facing Venezuela and the effort to defend the Venezuelan Embassy Protectors, who occupied the Venezuelan Embassy for 37 days to protect it from a hostile takeover by the coup-plotters under fake president Guaidó. The four activists were assaulted by the police, arrested — and now they face serious charges. There is a real possibility that Trump will seek to make an example of them. They each face a year in prison and a fine of $100,000.

There is going to be a pre-trial hearing on January 29, and the trial will be held on February 11. The four activists need funds for their defense committee. We urge your readers to make a donation directly on their website:defendembassyprotectors.org. For more information on the our work, they can go directly to blackallianceforpeace.com.

Ajamu Baraka: The situation is very difficult, but we are fairly optimistic. We know that the contradictions are sharpening. We know that the State is getting more aggressive. But there is only one direction we can go, domestically and globally — and that is toward real independent popular power in order for us to transform the world.

There is no other direction we can go. The contradictions between global capitalism and collective humanity are stark. The only solution, as these contradictions are irreconcilable, is a global radical revolutionary movement.