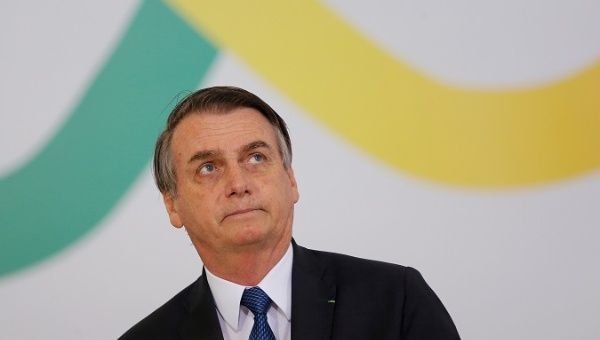 The museum was heavily criticized for hosting the event that was planned by a non-profit organization renting the space to honor openly-discriminatory President Bolsonaro.

The American Museum of Natural History in New York said Monday that it will not host a gala dinner that was set to honor Brazil’s far-right President Jair Bolsonaro as “Person of the Year.”

The museum was heavily criticized for hosting the event planned by a non-profit organization that rented the space to honor openly-discriminatory President Bolsonaro.

The Brazilian-American Chamber of Commerce’s plans to honor Bolsonaro, who has suggested he would pull Brazil out of the Paris Accord on climate change and wants to develop the Amazon rain-forest, at a museum dedicated to science and nature, was met with outrage last week.

The Brazilian minister of foreign affairs under Bolsonaro, Ernesto Araujo, stated in November that climate change is a ploy by “cultural Marxists” to asphyxiate Western economies and promote China’s growth. He also characterized climates science as “dogma.”

The museum had expressed concern over the event last week, saying the space had been booked before the decision was made to honor Bolsonaro. Museum representatives revealed that it had made the decision to not host the event.

“With mutual respect for the work & goals of our individual organizations, we jointly agreed that the Museum is not the optimal location for the Brazilian-Am. Chamber of Commerce gala dinner,” the museum said on its official Twitter account. “This traditional event will go forward at another location on the original date & time.”

New York Mayor Bill de Blasio, stated that it was “really troubling” that an institution receiving public funding from the city would hold event that is “in direct conflict with the values of the museum,” as was stated in an open letter to the museum’s president Ellen Futter.

“The external, private event at which the current President of Brazil is to be honored was booked at the Museum before the honoree was secured,” the museum had said on its official Twitter account Friday. “We are deeply concerned and we are exploring our options.”

Bolsonaro, who styled his campaign for office last year after that of U.S. President Donald Trump, drew further criticism from environmentalists last week by creating a body that could pardon environmental fines while also saying that a vast Amazon reserve could be opened to mining.

Bolsonaro has openly defended widening the agricultural border as well as other development projects in Brazil, which would mean further deforestation of the Amazon rain-forest. The Amazon rain-forest region is considered by most scientists as the world’s biggest natural defense against climate change.