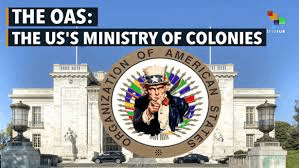 A small group of countries of the Organization of American States (OAS) convened a meeting of the Permanent Council for the purpose of debating the legitimacy of the re-elected president of Venezuela on January 10. , Nicolás Maduro.

According to information released by the official news agency of the Spanish State, EFE, the United States leads this group of nations that intends to interfere in the internal affairs of our country.

The report of EFE indicates that the request was already made officially and is waiting for the delegation of El Salvador to respond. It should be noted that this country will assume the presidency of the Permanent Council of the OAS on January 1.

According to statements made by the American ambassador in this continental organization, Carlos Trujillo, “we will not all have the same response, but it is important to have a conversation about the non-recognition of the elections. What does it mean from a diplomatic perspective? All countries will have a different answer. ”

It is worth remembering that President Nicolás Maduro was reelected, with 67% of the votes, for a second presidential term. Most of the countries of the world recognized the legitimacy and transparency of the electoral process that took place on May 20.