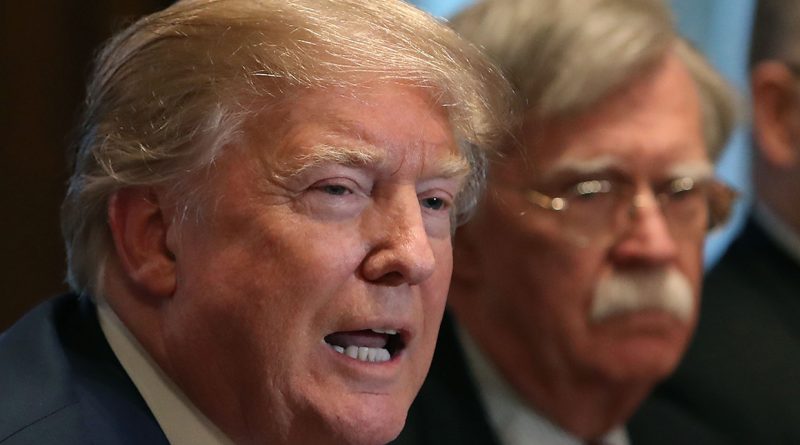 President Donald Trump on Thursday again claimed former national security adviser John Bolton, well-known for his hawkish impulses and inclination toward military intervention, was “holding me back” on certain matters of foreign policy.

“In fact, my views on Venezuela, and especially Cuba, were far stronger than those of John Bolton,” Trump tweeted. “He was holding me back!”

The president’s post was in response to a message from Sen. Marco Rubio (R-Fla.), who wrote online Thursday morning that he had spoken with Trump regarding Venezuela.

In fact, my views on Venezuela, and especially Cuba, were far stronger than those of John Bolton. He was holding me back! https://t.co/FUGc02xiac

“It’s true he disagreed with some of the views of previous advisor,” Rubio, a fierce critic of Venezuelan President Nicolás Maduro, had reported of his conversation with Trump.

“But as he reminded me it’s actually the DIRECT OPPOSITE of what many claim or assume,” Rubio continued. “If in fact the direction of policy changes it won’t be to make it weaker.”

Trump, who announced Bolton’s resignation on Tuesday, asserted to reporters in the Oval Office on Wednesday that he regularly backed a more hard-line brand of foreign policy than his ex-aide.

But Trump also denounced Bolton’s advocacy for the 2003 invasion of Iraq from within President George W. Bush’s administration, mocking him as “Mr. Tough Guy” and remarking: “He’s so tough, he got us into Iraq.”

The president’s statements this week are at odds with his previous assessments of Bolton’s counsel. At a news conference in May, Trump shrugged off reports that he was losing confidence in his national security adviser and said he also receives input from “other people that are a little more dovish” than Bolton.

“He has strong views on things, but that’s OK,” Trump said. “I actually temper John, which is pretty amazing.”