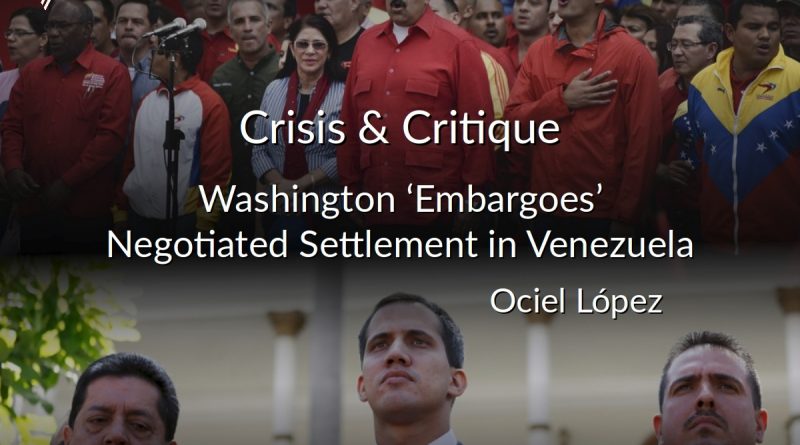 In the second installment of his VA “Crisis & Critique” column, Ociel Lopez looks at how Washington’s embargo blocked a possible agreement between the government and the opposition.

In early August, there were rumours from political sources on social media that some sort of pre-agreement concerning elections was being negotiated by the Maduro government and the opposition in Norway-mediated talks. Then, the United States escalated its sanctions with a new executive order signed by Trump on August 5, freezing all Venezuelan government assets in the US and implementing what some analysts have described as an embargo comparable to that imposed on Cuba over the last half-century.

Shortly after the executive order was signed, Maduro left the negotiating table.

Before this, various opposition social media accounts mentioned that presidential elections were coming, and some even claimed that Chavismo’s candidate would not be Maduro but rather the current Miranda State Governor Hector Rodriguez. For his part, Maduro began to speak about the electoral scenario and called on his party to prepare for early National Assembly elections. At the end of July, the possibility emerged for the first time in years of a peaceful solution to the Venezuelan crisis. All that was left was a new meeting in Barbados coordinated by Norway and scheduled for August 8 and 9 in order to try to seal a final deal.

There is no alternative interpretation: with the August 5 executive order, the United States blocked the signing of an agreement.

Trump’s special envoy for Venezuela, Elliott Abrams, put it clearly in a very frank interview given to two journalists from the American Enterprise Institute (AEI), a conservative DC think-tank. “We don’t care what deal is made. If Nicolas Maduro is in power, we are not lifting our sanctions,” he stated.

RELATED CONTENT: “The US Will Not Support Elections if Guaido or Maduro Participate” – Elliott Abrams

Abrams said that an “amazingly poor, lying proposition” – namely that there could be presidential elections with Maduro in power but with another candidate for Chavismo – “has actually gotten some support in the EU [European Union].” “This is a really bad deal,” he added.

Later on, Abrams clarifies the basis of his suspicions vis-a-vis a short-term election. Chavismo could divide the opposition, and “might actually win.”

Certainly, this is a viable scenario given the advantages the opposition has surrendered with its abstentionist politics, the in-built benefits of ruling party incumbency, and the impact of migration affecting principally the opposition. Therefore, it’s logical to think that elections like those being negotiated in Barbados could be seen as a risk by the US administration.

What Abrams doesn’t explain is how they plan on removing Maduro if sanctions don’t have a political effect that comes close to securing that objective. In our previous installment, we examined how the sanctions strengthen Maduro, legitimate his narrative of the crisis, unify Chavismo and the Armed Forces, and finally end up even dividing the opposition. They hide Maduro’s responsibility for the mismanagement of the economy and the oil industry.

The opposition’s divisions became much more visible after this latest executive order. The very next day, Henrique Capriles, former presidential candidate who lost narrowly to Maduro in 2013, opened fire on those he termed “boltonites,” in reference to radical opposition sectors who advocate foreign military intervention as the only option and block an electoral settlement. Recently fired US National Security Advisor John Bolton was the Trump official charged with unveiling the new sanctions this August.

The opposition political sector that Capriles branded “boltonite” is led by Maria Corina Machado, who had already distanced herself from Guaido’s movement after the failure of the April 30 military putsch and the start of dialogue in May. Machado’s faction sought to delegitimize Guaido on the basis of an investigation by a media outlet reportedly belonging to her cousin, the PanAm Post, concerning the embezzlement of humanitarian aid funds by Guaido’s envoys. And this meant a fissure in the radical right-wing, which is not the only rift in the opposition ranks. At that point this radical sector launched a social media campaign against Guaido, berating him for not issuing an open call for foreign intervention and for considering the path of dialogue – a campaign that has been expanded against other leaders of the main opposition parties engaged in negotiations.

We must recall that Maria Corina Machado’s political party has never had governors or mayors of any electoral weight, and its political force is very limited within the opposition, coming in fourth place in the presidential primaries. But it possesses an arsenal of social media accounts with an extraordinarily persuasive reach. It remains to be seen what the recent firing of Bolton will mean for this hawkish faction’s political fortunes and the overall correlation of forces within the opposition.

For their part, the social democratic opposition parties with electoral weight have placed their wagers on different solutions, including participating in the attempted coup d’etat of April 30, but they do not want to turn their backs on the electoral path because they know that the violent, military road has failed repeatedly and is very dangerous for the leadership residing in the country. Meanwhile, influencers and Venezuelan media in the United States demand the heads of anyone who tries to take up the mantle of dialogue, including Norway.

RELATED CONTENT: Venezuela: US is Killing Any Dialog to Maintain a Total Blockade

One also has to appreciate the impact that Washington’s obstruction of an agreement may have on other countries that recognized Guaido and demanded a democratic resolution, especially the European Union, which is pushing negotiations.

Once Guaido’s April 30 uprising was pronounced a failure, the objective of taking control of the world’s largest oil reserves does not appear as imminent as in January. There is clearly a longer term strategy at work.

In the abovementioned interview, Abrams soothes the restless journalists who demand the Trump administration “add the threat…of military action… which would give credibility to our effort”:

I’m constantly telling people if you had said to George H.W. Bush in 1988 say when he was vice president that you’re going to be invading Panama in a year or two, he would have said, “you’re out of your mind.”

We know that the US government has its own timetable but it’s incomprehensible that they would have burned through the Guaido option with such a disappointing outcome in terms of time and effort invested by top administration officials from Pence to Pompeo and Bolton. Is this all a deliberate strategic plan or an abrupt change of mood?

In the wake of the failed strategy to recognize a parallel government in late June, Trump, facing ridicule from the hawks over Venezuela, painted a startling image: “The problem is so many people are leaving Venezuela, it’s going to be a ghost town.” Weeks later, the administration doubled down on its regime change effort with a new executive order imposing what has been likened to the embargo against Cuba.

We don’t know what further sanctions and measures are to come. What we can say is that Washington’s Venezuela strategy has gone from high to medium heat, waiting for a different moment while the country’s economic situation continues to deteriorate.

All eyes now turn to what the Maduro government effectively can or cannot do to dribble past the sanctions and their deadly impact on the Venezuelan people.

Ociel Alí López is a Venezuelan researcher who has published numerous written and multimedia works. He is dedicated to analyzing Venezuelan society for several European and Latin American media outlets. He is a co-founder of alternative Venezuelan state television station Avila TV in 2006. He is the recipient of the CLACSO/ASDI researcher prize and the Britto Garcia literature award.

Featured image: VA columnist Ociel Lopez looks at how the August embargo blocked a foreseeable settlement between the government and the opposition. (Venezuelanalysis)