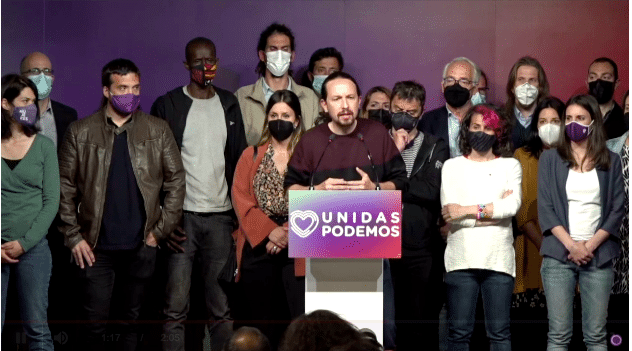 The leader of Spain’s Podemos party, Pablo Iglesias, announced his resignation from politics after the defeat suffered in the regional elections in Madrid.

Iglesias, 42, who had already left the vice presidency of Pedro Sánchez’s socialist government, in March, to compete for the presidency of the Community of Madrid, in an attempt to boost his party’s showing in the elections declared that he was leaving “all [his] positions” and all “politics understood as party politics… When you stop being useful, you have to know how to withdraw,” he added.

RELATED CONTENT: Venezuela Reiterates Willingness to Maintain Constructive Relations with Spain on the Basis of Respect

In addition to announcing his resignation, Iglesias presented Yolanda Díaz, Minister of Labor and current third vice president of the Spanish Government, as his possible successor. However, this replacement must be raised at a party congress.

The leader of Podemos further declared: “I am not going to be an obstacle for the renewal of leadership that has to take place within our political force”—a force that was surpassed in the regional elections by the incumbent, re-elected Madrid Community president and conservative candidate Isabel Díaz Ayuso, who achieved almost an absolute majority.

Díaz Ayuso won 65 seats for the People’s Party (PP), and the remainder of the seats in the Assembly of Madrid were distributed among the three leftist forces which participated in the elections, namely, the Spanish Socialist Workers’ Party (PSOE) (24), Podemos (10 seats) and its offshoot Más Madrid (24).

Iglesias established the Podemos party in 2014 and has been its only secretary general so far. The party was formed out of the Movimiento Antiausteridad de los Indignados [anti-austerity movement of the indignant] which emerged in May 2011 in Madrid.