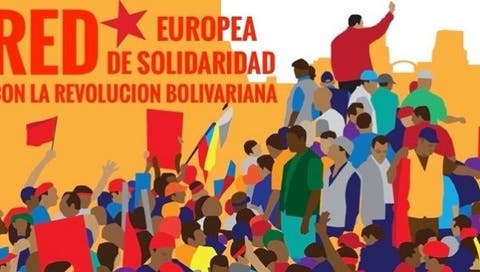 Social and political movements that make up the European Solidarity Network with Venezuela expressed their rejection of the measures of pressure adopted by the European Union authorities against the South American nation.

The demonstrations in support of the Venezuelan people and the legitimate government of President Nicolás Maduro are included in a statement released by the Network. In it, the solidarity organizations express their firm condemnation of the decision of the European Union (EU) to declare as persona non grata the Venezuelan Ambassador to EU, Claudia Salerno.

“Venezuela has been the victim of a multiform and permanent aggression in recent years; which has resulted in flagrant violation of the human rights of the Venezuelan people and the sovereignty of that country,” read the statement. “For this reason, from the European Network of Solidarity with Venezuela, we express our full support to the Bolivarian people and the government in the face of this new aggression.”

The retaliation against the Bolivarian diplomat came after Venezuela declared the EU representative in Caracas persona non grata in response to new the European bloc’s illegal and racist sanctions against 19 members of the Venezuelan National Assembly.

In this sense, the European Solidarity Network has stated that “these new EU sanctions against Venezuela arise, inexplicably” within a few days after the United Nations itself, through the Special Rapporteur on the Negative Impact of Unilateral Coercive Measures, Alena Douhan, denounced the sanctions as “devastating.”

Outlaw European Union
The European Solidarity Network with Venezuela condemned the efforts on part of the EU to support and promote sanctions against the Venezuelan people. They also regret the old continent’s attachment to the policies dictated by the United States government, in a strategy that causes nothing but damage and pain to Venezuelans.

Likewise, they denounced the hostile and counterproductive attitude of the EU aimed at undermining the efforts of the legitimate government of President Nicolás Maduro to overcome the consequences of the blockade imposed by Washington. The statement adds that this position is far from promoting dialogue and reconciliation.

To read the full text of the statement in Spanish issued by the European Solidarity Network with Venezuela, click HERE.