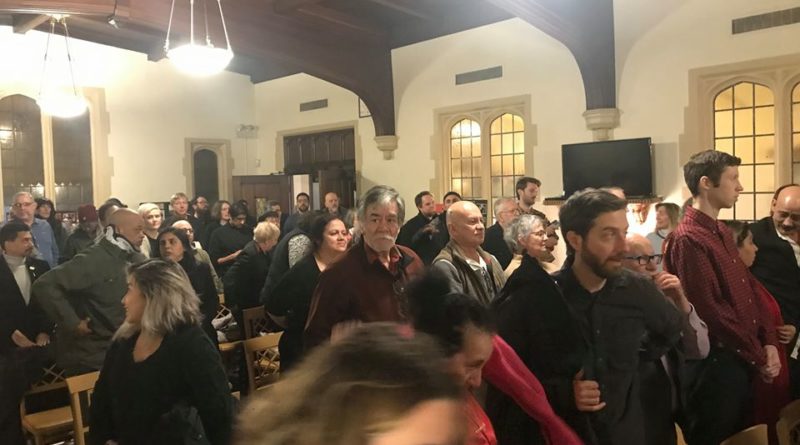 Grassroots organizers from many struggles for justice, friends, family and comrades of Richard Reilly gathered together in Chicago on Tuesday, February 17, to lay to rest the lifelong Irish American revolutionary struggler for justice and liberation. Friends and supporters of the Popular Front for the Liberation of Palestine, forces of solidarity with the Palestinian people and representatives of the Arab community and the labor movement joined comrade Reilly’s companion of 27 years, Christine Geovanis, to bid him farewell. The funeral took place at Waldheim/Forest Home cemetery in Chicago, where the comrade was buried near the remains of many historic fighters for socialism and the working class in the United States, including the Haymarket Martyrs, Lucy Parsons, Elizabeth Gurley Flynn and William Z. Foster. His funeral included words of remembrance and farewell, and his coffin was draped in the Palestinian flag. Mahmoud Darwish’s poem, “Ana Min Hunak/I am from there” was read out before his burial. As he was buried, his comrades, friends and family sang “Solidarity Forever,” the classic song of the labor movement, with clenched fists held high. They pledged to continue on his revolutionary path, with dedication to the goals to which he dedicated his life, the return and liberation of the Palestinian people and Palestinian land. Comrade Richard Reilly spent most of his life as a defender of the Palestinian cause and a struggler for all just movements of the people everywhere, particularly the Irish freedom struggle and the Black liberation movement. “We know that Palestine has lost one of the most deeply committed voices that has always stood with the Palestinian people in the most difficult of stages, a comrade who always struggled on the front lines, a fighter for oppressed communities and Black and indigenous liberation movements. He always believed deeply in the inevitability of the victory of the Palestinian people and the liberation of Palestine, from the river to the sea,” noted the Front in its memorial statement issued after his death on February 11.

The Popular Front for the Liberation of Palestine reiterates its pledge that we will not forget this great comrade. We will remain true to his path of struggle and continue to adhere to the principles for which he fought and dedicated his life, until victory over imperialism and Zionism.

Source URL: Popular Front for the Liberation of Palestine (PFLP)