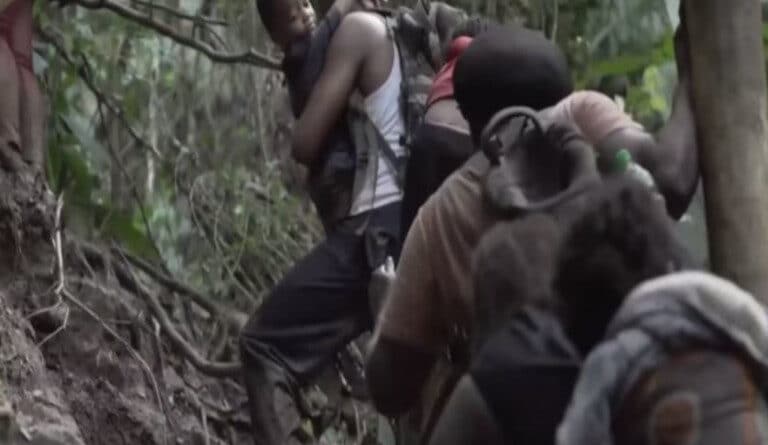 On Friday, August 6, delegations of the governments of Panama and Colombia met, with the aim of reaching an agreement to control the flood of mostly Colombian migrants, people who have been forced into vulnerable situations by the pandemic, trying to cross the inhospitable and dangerous forested area of Darién on their route to the United States.

Just in this year, about 49,000 migrants have crossed the border between Colombia and Panama, which is equal to the number of migrants from the last four years combined. They are fleeing the crisis generated by COVID-19, poverty due to neoliberal policies and violence in their places of origin.

This situation threatens to overwhelm the care centers that the Panamanian authorities have installed to provide assistance to migrants after their passage through the inhospitable and dangerous Darién forest, which has become a corridor for irregular migration.

RELATED CONTENT: There are No Mass Migrations Without US Meddling and Militarism

Before traveling to the meet her Colombian counterpart, Mouynes announced that the meeting was “part of an important effort that the government has been making for months to visibilize [the problem] and anticipate what could be a migration crisis.”

“We are trying to address two very important points: the number of migrants that come here, and the exchange of information,” added Mouynes. “It is essential for our administration to have these information in order to maintain a controlled flow.”

Both Colombia and Panama have asked for international help, including from the United States, to deal with the flow of migrants through their territories.

For her part, Colombian Vice-President Ramírez stated that “we must integrate with each other, but also with the United States. This is our continent and what happens in Patagonia or Alaska affects us all.”

To avoid organized crime
For several weeks, thousands of migrants, including minors and pregnant women, have been waiting in the Colombian port of Necoclí for boats that would take them to the border with Panama to cross the Darién forest.

This 266 km jungle corridor between Colombia and Panama has become an obligatory passage for South American migrants trying to reach Mexico, the United States, and Canada.

The migrants cross the 575,000-hectare forest, despite the fact that there are no roads in the forest, and they have to face criminal gangs, mighty rivers, and wild animals like poisonous snakes.

Panama intends to reach an agreement with Colombia similar to the one it has with Costa Rica, where a certain number of migrants are transferred on a daily basis and in a controlled manner to the Costa Rican border, so that they can continue on their journey.

It also seeks to prevent organized crime from infiltrating the migratory flow. In recent years, the Panamanian authorities have detected, amongst the migrants, around 60 individuals against whom there were terrorism alerts.

Juan Pino, security minister of Panama, stated that “seeing the migration surge, organized crime has tried to take advantage of it.” Consequently, added Pino, the government of Panama is planning to “adopt more security strategies” through applying intelligence information exchanges.

“The Darién region is immense,” commented Pino. “It has many trails and roads and we are trying to do everything possible to have a controlled, fast and safe flow.”