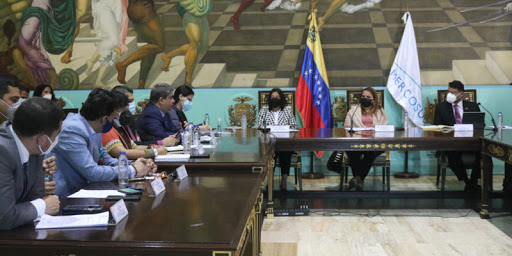 On Thursday, August 5, a delegation of representatives of the Venezuelan National Assembly and the Foreign Affairs Ministry participated in a session of Parlasur, the Parliament of Mercosur, with the aim of strengthening bilateral relations in the region.

The Venezuelan delegation was headed by Iris Varela, first vice president of the National Assembly. Deputies from the opposition and the Bloque de la Patria coalition were also part of the delegation.

Deputy Minister of Venezuela for Latin America, Rander Peña, representing the Ministry of Foreign Affairs, was also present at the meeting.

During the Second Ordinary Session with the parliamentary delegation of Venezuela at Parlasur, the current situation in the country was discussed and, working groups for political cooperation were formed. Through these working groups, the representatives will coordinate actions to promote the strengthening of Venezuela’s presence within the South American multilateral organization.

In May of this year, the Venezuela Chapter of Parlasur was established in Caracas, chaired by Saúl Ortega, with Iris Varela as the deputy chairperson.

Also, in February, the National Assembly appointed Venezuela’s representatives at Parlasur, who are in charge of representing the country before this multilateral body.

On that occasion, 25 representatives were appointed, some among them are: