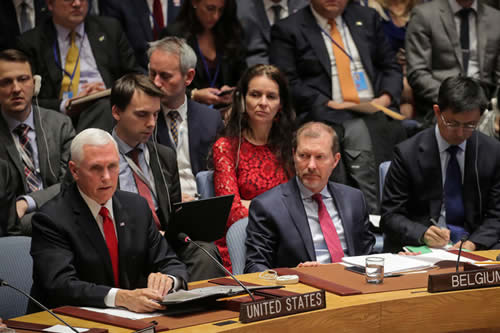 The vice president of the USA recommended Samuel Moncada return to his country to “tell Maduro that his time is up.”

The vice president of the United States, Mike Pence, asked on Wednesday before the UN Security Council to recognize the opposition deputy Juan Guaidó as “legitimate president of Venezuela and accept his representative in this organization.”

Thus, he has asked the Venezuelan ambassador: “The time has come for the UN to recognize Juan Guaidó as legitimate president, Mr. Ambassador, you should not be here, you should go back to Venezuela and tell Maduro that his time is up.”

Samuel Moncada, the Venezuelan representative, received the reprimand with a smile while shaking his head. During his speech Moncada gave a lecture to VP Pence updating him on all the sanctions and looting led by his government in order to strangle Venezuela’s economy, looking for an excuse for the regime change operation they are shamelessly leading.

“Nicolás Maduro is a dictator who has no legitimate power, Nicolás Maduro has to leave,” said the US official, who announced that the US will deliver 60 million extra in humanitarian aid to Venezuela.

In this sense, Pence, who asked to revoke the credentials of the representatives of the Maduro government, said: “The Western Hemisphere spoke with a clear voice, Nations from all over the world have spoken, it is time for the United Nations to speak.”

“I ask this body to defend democracy and the rule of law in this country that has suffered so much,” said the US vice president, who said his country considers Maduro” a dictator who has no legitimate power”.

In response the Venezuelan diplomat enumerated all the underhanded actions of the US government directly leading the coup d’etat against President Maduro, trying to impose a puppet government, forcing a self-proclaimed “interim president” to control Venezuela in their name, and putting their hands on Venezuelan natural resources that are the real reason for this US regime change operation. “Who can believe that Donald Trump, Mike Pence, John Bolton, Pompeo or Marco Rubio are interested in help the Venezuelan people”, the Venezuelan ambassador said.

In addition, he recalled that the US was the main country in recognizing Guaidó as the “president in charge” of Venezuela, after its self-proclamation on January 23. In this way, he pointed out that today there are 54 of the 193 countries of the UN that recognize the parliamentarian.

Actions against Cuba
On the other hand, the official denounced the relations of Caracas with Cuba and Iran and assured that the US will maintain diplomatic pressure to achieve “a transition” in the government of Venezuela. However, he reiterated that his country continues “shuffling all options. ”

Thus, he affirmed that Washington will announce “soon” more measures against Havana, after those recently applied that seek to prevent the shipment of oil from Venezuelan territory.

Regarding Iran, Pence said that this week, Caracas received a delegation from Tehran “to start trips between the two countries.” In this regard, he assured that the Iranian airline that was present is a company “sanctioned by the US for transporting weapons of war.”

On Wednesday, the Security Council of the United Nations (UN) meets to discuss, for the third time since January, the political and social situation in Venezuela. The session, like previous ones in January and February, was convened by the US mission in the international organization.

Source URL: Actualidad RT with OT content (due the extreme partiality of the original piece)