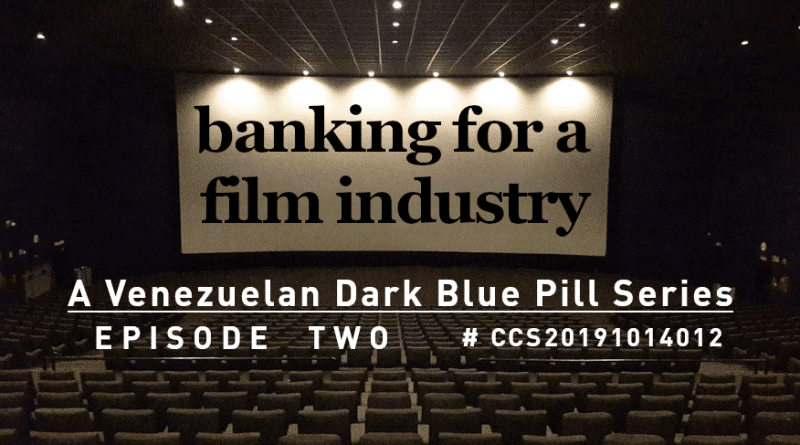 On September 29th, during the closure of the CINEMA AND AUDIOVISUAL ENCOUNTER — INNOVATE OR FAIL, the Venezuelan Minister for Culture Ernesto Villegas proposed the creation of a National Bank for Cinema and Audiovisual Projects in order to administer the 100 million (M) euros approved for this sector by president Nicolás Maduro a few days earlier.

Driven by our catastrophic economic crisis, the National Bank for Cinema proposal picks up from where the 2018 Exporta Cultura Program, an initiative that vanished the same day it was announced, left of; subtly and belatedly acknowledging: a) the existence of an film industry, b) CNAC’s ineffectiveness in promoting one, and c) the asset-tied General Banking Laws which in essence forbid financing any Intellectual Property endeavors.

While the CNAC and La Villa del Cine helped made more than 40 feature films, none of them was purposely produced to please international audiences and just one of them evidently managed to please enough audiences at home to recover its production costs. These overall results are the outcome of the Director-Focused CNAC’s Film Financing Policies, as supposed to Audience-Driven approach in which the Film Industry is built upon.

In order to effectively start building a Film Industry in Venezuela that: a) delivers capital-gain taxes in foreign currency for the nation, b) maintains a constant economic activity for writers, talents, technicians and an array of various types of artists, craftsmen and artisans, c) increases demand for hotel, transportation, catering, security services, and d) promotes tourism across our land of grace, the National Bank for Cinema’s Board of Directors must ask, understand and embrace:

1. Which International Film Markets should Venezuelan Film Producers focus on.

On average the Film Industry produces $39 Billions (B) at the box-office every year. Putting Hollywood aside, Independent Film Producers generate $9B alone.

If we take a deeper look at the largest film market: U.S.A., which produces $11B at the box office, we can easily uncover a Latent Opportunity for Venezuelan Film Producers: there are 57M Hispanics living in the U.S., and 8.3M of them go to the movies at least once a month or more, yearning to see good stories they can relate to and familiar faces playing roles they can identify with, and spending up to $2.3B at the box-office, year after year.

This opportunity was foreseen back in 2010 by Televisa, the largest Mexican television station, and Lionsgate, one of the largest independent film production studios, who created a join partnership called Pantelion Films, and since then they have co-produced or produced and distributed to date 40 films to the Hispanic audience living in the U.S., and then Mexico.

After many attempts that have failed to delight audiences driven primarily by weak and elite-focused screenplays, they have nonetheless delivered the following breakthroughs: [Film Name][Year] — [Box-Office Revenues]

2. Which genre should Venezuelan Film Producers focus to effectively compete with.

In the following graphic the blue bar reports the number of films produced between 1995 and 2018, and the red bar reflects the average revenues at the box office during the same period.

A quick look reflects that adventure and action films drive the highest ticket receipts, however they also demand for the highest production budgets, therefore such are primarily produced by Hollywood Studios. Likewise, drama films are the most produced and generate the least average at the box office.

It is relevant to remark that History is a subject matter found in books and lectures; in films History is just a context, never a genre.

A recent Low-Budget ($3M-10M) Film Study conducted by the American Film Market over 3,000 films that generated profits revealed that all of these films could be grouped into three distinctive genre:

The following is a short list of powerful and effective Low-Budget Independent Films that generated at the box office from 10 to 50 times its production costs: [Film Name][Year] at [Production Costs] = [Box-Office Revenues]

3.- How should they evaluate screenplays presented by Venezuelan Film Producers.

A film viewer does not have to be a “movie-expert” in order to enjoy a great story. Likewise, there are no “script-reading” skills required to understand and appreciate a sound story with a well-structured screenplay other than: a) setting aside two (02) hours to read without interruptions within a cozy and quiet place, b) take a 5-minute break afterwards, and c) follow the below checklist:

The upcoming National Bank for Cinema must realize that a Film Industry is only built upon good stories well told. Screenwriting is not an easy task, it demands a lot of reading, research, discipline and an audience perspective.

Film audiences go to the movies because they want to be entertained in order to re-create themselves; they do not want to be bored to death.

Since Cinema became a Film Industry, film making has only been made possible by either an investor who expected a return or a state benefactor. Our current crisis, derived by our lack industries, demands that we wisely invest our scarce resources in order to diversify and strengthen our economy.