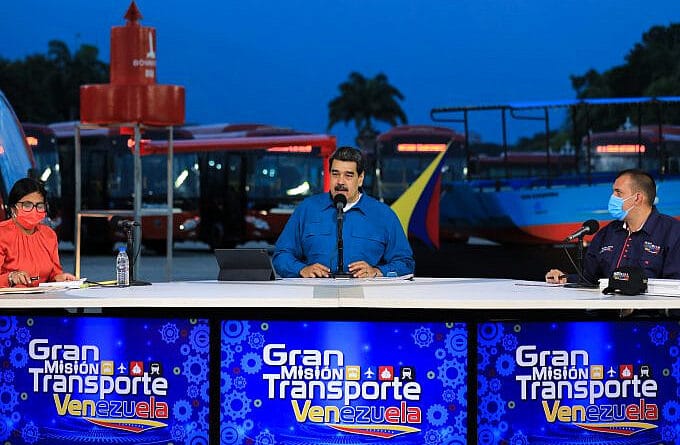 On Tuesday, September 28 the President of Venezuela, Nicolás Maduro, approved financing to restore railway projects abandoned by Odebrecht within the framework of the Great Venezuela Transportation Mission.

The giant Brazilian construction company Odebrecht paralyzed projects in different part of the world, evading hundred of millions of dollars in contracts, as a result of the complex corruption scheme unveiled by the Panama Papers in 2017. It involved more than 10 countries including Venezuela. In the case of Venezuela, despite great media fanfare, the only politician revealed to have connections with the scandal was Enrique Capriles while he was governor of Miranda state. No charges were formally brought against him.

During a working day dedicated to the development of the Multimodal Transportation System in Venezuela, President Maduro requested transportation and public works authorities to complete “all the works that Odebrecht abandoned illegally.”

To this end, the Dignitary approved:

• €15.9 million for the completion of the elevated Guarenas-Guatire railway project, paralyzed as a result of the breach of contract by the Brazilian conglomerate Odebrecht. Maduro explained that the plan consists of activating the Guarenas-Guatire section first, and using metro buses while the Guarenas-Petare section is completed, which will remain on hold for a future stage.
• €15.6 million to restart work on Line 5 of the Caracas Metro in order to restore the Zona Rental–Bello Monte section.
• €3.5 million for the comprehensive rehabilitation of Section 2 of the San Agustín-La Ceiba MetroCable.
• €6.7 million for the completion of civil, telecommunications, and electronic works for the control of trains at the San Diego, Guacara, San Joaquín and Mariara stations, for the Ezequiel Zamora II railway system in Carabobo state.

“These works were abandoned, said Maduro. “They breached the contracts, they left the country in the Odebrecht scandal, and now we have to finish all the works that Odebrecht illegally abandoned.” Maduro asked the sector vice president of Public Works, Néstor Reverol Torres, as well as the Minister of Public Works, and the workers, to complete these projects. “In some cases these transnationals billed these projects at extremely expensive prices, now we are doing it with our hands,” said the president.

On social media platforms, many opposition and right-wing politicians and influencers immediately began criticizing the announcement, posting videos of President Maduro announcing similar plans in 2017 and 2018. These announcements were made before the US and EU increased illegal coercive measures in order to make the Venezuelan economy scream, as announced by the then US ambassador to Colombia, William Brownfield.

761 buses incorporated into the Public Transport System
“We are going to incorporate 761 units into transportation systems throughout the country,” added Maduro. “256 new units, fresh from the Yutong Factory in Yaracuy, and 505 units fully refurbished, as good as new, nationwide.”

More maintenance
Likewise, the national president recalled that the administration has been obliged to focus its attention on the refurbishment of transportation vehicles, as some were reduced to a state of disrepair.

President Maduro pointed out: “ We have failed in the preventive and corrective maintenance that, on a regular basis, has to be done to (the buses). In spite of the fact that I spend a lot of time talking abut it. We have rediscovered the significance of maintenance, because of imperialism, its ‘sanctions,’ and its blockade.”

“It (imperialism) forced us to pay attention to the restoration of units that were abandoned, in some cases, in backyards or cemeteries.” added Maduro. “That cannot be. For this reason, I am happy that we have resumed the path of corrective, preventive, and in-depth maintenance, and we are delivering 761 units today.”

For his part, the president of Yutong, Héctor Rojas, indicated that a total of 29 shipping containers from the People’s Republic of China arrived in Venezuela with more than 55,000 spare parts, tires, and supplies to carry out the 2021 recovery plan, thanks to international agreements between Venezuela and the Asian giant. With these pieces, the recovery and maintenance of metrobus units in Greater Caracas, Trans-Anzoátegui, Trans-Vargas, Trans-Bolívar, Trans-Miranda, among other systems throughout the country, will be executed.

The Vice Minister of Land Transportation Claudio Farías highlighted that reverse engineering and import substitution are being applied by automotive plants to repair these units. He indicated that 45% of the parts required by transportation units can be manufactured within the country by Venezuelan labor.

Finally, President Maduro recommended that the Minister for Transportation, Hipólito Abreu, and the Sectorial Vice President of Public Works and Services, Néstor Reverol, present to the National Executive a list with all deactivated units that can be restored, and a sustainable plan for refurbishing vehicles in the transportation sector, in order to deploy most of them by the end of the current year, and to continue to improve public transportation services in the future.