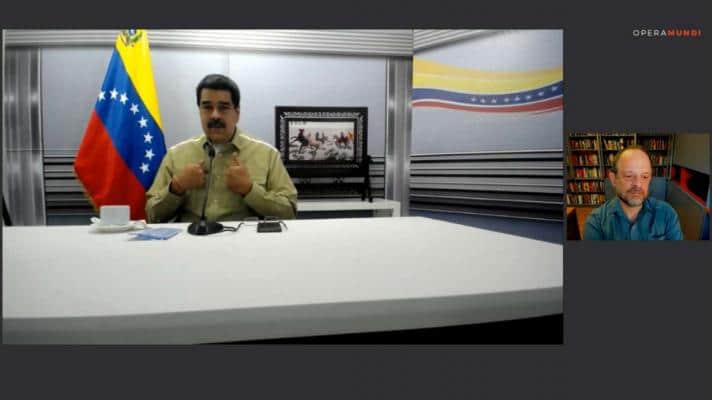 He spoke about the motives that the United States has for carrying out its unconventional war agenda against Venezuela. “They are trying to collect a bill from us because I have not allowed myself to be overthrown, we have not allowed ourselves to be colonized,” said Maduro.

He assured that the international smear campaign that marks him as a dictator is only a justification for Venezuelan anti-Chavismo forces subordinate to Washington to carry out the tasks that are dictated to them. The intent is to try to provoke regime change, and that this did not start with him, but rather it goes back to the beginning of the political direction of the country undertaken by Commander Hugo Chávez.

“For several years they have called me a dictator and they have also called Chávez a dictator. It is a way of justifying their extreme coup policy. This label that they want to give me as a dictator is because they have not been able to overthrow us. We do not allow ourselves to be taken hostage, we do not allow ourselves to be colonized. The right, the center-right and some progressive and leftist sectors of the world try to label us,” he said.

He took the opportunity to recall the damage that the Guaidó operation has caused to Venezuela, a plan orchestrated by the United States Government with the collaboration of Colombia, and encouraged by some European and Latin American countries. He said they are interested in obtaining benefits from Venezuelan resources: “Guaidó has appropriated thousands of millions of dollars. The United States Government has given them $ 1.7 billion and with that they have bought lobbies. They have hired two or three very powerful lobbies to court the Department of State and the White House,” he explained.

For the Venezuelan head of state, the strategy adopted by the Donald Trump administration, specifically pointing to the former secretary of state, Mike Pompeo; former Treasury Secretary Steven Mnuchin; and to Elliott Abrams, was “effectively a policy to suffocate and make Venezuela surrender. They managed to do us great harm, but we have withstood them and we will never surrender,” he said.

With the accession of Joe Biden to the US presidency, the Venezuelan government is ready to “turn the page” and establish good relations with the White House. “I hope they have the ability to turn the page. For my part, I have already turned the page. The four supremacist and extremist years of Trump’s aggression will remain as a bad memory. Now we will go into the future and hopefully the future will be better,” said the president.

“NOW THE CENTER OF TRUMPISM IN THE WORLD IS BOLSONARO”

The president also made mention of the extreme right-wing government of President Jair Bolsonaro and its relations with Venezuela. “Trump is gone. Now the center of Trumpism in the world is in Brazil, it is with Jair Bolsonaro. I see it and hear it every day. He is worse, more aggressive, against the press, against the people, more threatening, but irascible, and in denial,” he added.

Recently, the Venezuelan government sent free oxygen to the city of Manaus, in the Brazilian state of Amazonas, to provide health centers and help COVID-19 patients with severe respiratory symptoms. Before this gesture of solidarity, Bolsonaro’s response was to proclaim mockery and insults against President Maduro and Venezuela.

“What happened in Amazonas would not have occurred if Bolsonaro had asked for Venezuela’s help in time. We had not lacked for oxygen and that emergency need not have happened,” said the Venezuelan president.

Regarding an official meeting between the two leaders, President Nicolás Maduro said that he did not believe it possible due to the refusal of Jair Bolsonaro. However, if the meeting occurs, I would reiterate that governments must have the ability to listen to each other for the good of the populations of Venezuela and Brazil. He added that he regretted it for the Brazilian people and that he hoped that the neighboring country would resume its path, leaving Bolsonaro like Trump, “forgotten by history.”