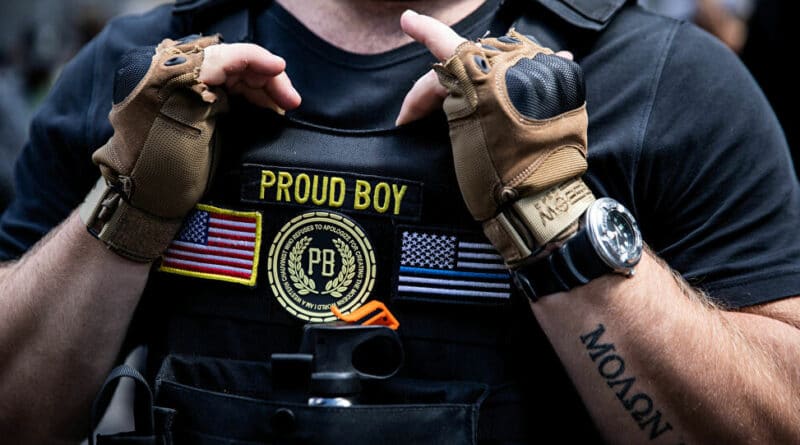 Founded in 2016 by writer Gavin McInnes, the group defines itself as an advocate of “Western chauvinism” and as opposed to the political correctness of progressive movements. Although they claim not to be white supremacists, the Proud Boys are continually singled out for their attacks on anti-racism protesters.

The United States has been going through a process of political polarization for several years in which, in addition to large movements of protests against the policies of the president, Donald Trump, and police violence, several far-right groups have gained strength that are less and less modest about the defense of their ideas publicly.

One of them is Proud Boys, a group of men who define themselves as defenders of “western chauvinism” and whose members have been involved in acts of violence registered in recent weeks in various parts of the United States.

Tusitala Tiny Toese, one of the members of the group, was arrested in the southwest of Washington state after being identified as a participant in the incidents registered in the city of Portland, in the bordering state of Oregon, in which a person was killed by one shot.

The history of the Proud Boys begins in 2016, when the group is founded by the writer and journalist Gavin McInnes, famous for being one of the founders of Vice magazine, aimed particularly at young people and famous for its controversial style.

According to McInnes himself, the name of the organization came to him after hearing a child sing the song “Proud of your boy” from the movie Aladdin during a school party. McInnes found the performance shameful and attributed it to the fact that it was the son of a single mother. The very anecdote of the emergence of the name thus becomes a declaration of principles of the group, which only allows the enrollment of cisgender men.

Although McInnes likes to define his club as “without parameters, only men”, it is an organization linked to right-wing thought and contrary to American progressive discourse. In addition to claiming freedom and rejecting “political correctness”, the Proud Boys raise the banner of “Western chauvinism”, summed up in the axiom that “the West is better.”

On its information platforms, the group defines “Western chauvinism” as the demand for “secular governments whose legal code is based on Judeo-Christian ethics and originates from the Greco-Roman tradition.” In addition, they seek to remove the negative meaning from the term chauvinism, defining it as “shameless patriotism.”

“When we say ‘I am proud of Western chauvinism’ we are saying ‘I am a proud and unabashed proponent of Western civilization. It is that. It has nothing to do with race, ethnicity, religion, sexuality or even national origin.” write the Proud Boys on their official website.

“We do not discriminate on the basis of race or sexual orientation. We are not an ism or a phobia that fits the leftist narrative. We truly believe that the West is better and we welcome those who have the same principles as us,” adds the organization .

The Proud Boys and the incidents
But despite declaring itself non-racist, the Proud Boys’ positions on racism have repeatedly placed it at the center of controversy. Indeed, while the group founded by McInnes claims not to support white supremacy, several of its members often participate in mobilizations that support racist slogans or are contrary to anti-racist protests.

In 2018, without going any further, the Clark County Police, in the state of Washington, claimed that the group had been declared as an “extremist group linked to white nationalism” by the FBI. The federal agency denied that classification days later, although it recognized that the Proud Boys had been included in a report on the potential dangers of extremist groups, although it focused on some members individually and not the entire group.

In any case, violent incidents in which members of the group are involved are repeated every year, especially since the group usually participates in demonstrations opposed to mobilizations by anarchists or Antifa organizations.

In 2019, for example, two members of the Proud Boys were convicted of participating in a beating of Antifa activists in New York. As reported by the New York Times at that time, it was the first time that members of the organization actually received a sentence due to this type of confrontation, frequent now in several cities of the United States.