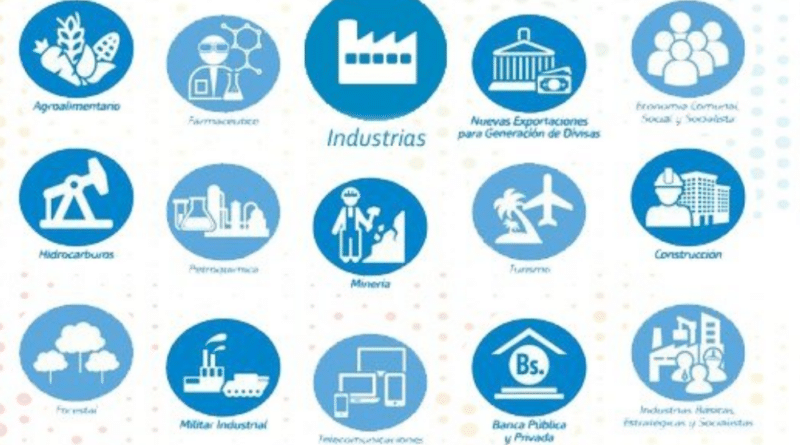 From 2013 to 2018, production in Venezuela fell 49%, that is, the cake was reduced by half. The Central Bank of Venezuela has not published production information since that year, however, the Economic Commission for Latin America (ECLAC) estimated a fall of 25.5% only for the year 2019 and forecasts that it will fall 26% in 2020, which means that at the end of this year and with respect to 2013, the Venezuelan economy will have reduced 72%. In simple terms, if 100 were produced in 2013 in December of this year, only 28 will be produced.

To this situation we must add the fact that not only is the cake smaller, but it has been being distributed more unevenly. In 2014, according to the BCV, the bourgeoisie was left with 31% of the pie and the workers with 36%, let’s not forget, that we workers are many more than the bourgeoisie. By 2017, being the smallest cake, the bourgeoisie ate half (49%) and left only 18% to the zillions of workers. We are waiting for the BCV to publish the information for the years 2018 and 2019 to find out who has eaten more or less cake in the last two years.

We will not focus on the issue of distribution, we have already done so in previous articles, but on the issue of production, the size of the cake and, above all, its causes.

It seems that it is not a matter of lack of incentives. What else could be offered to this private sector to invest and produce in the country? Not only have they not invested, not only have their investments decreased 88%, they have also not stopped earning. When they go from eating 31% of the cake to 49%, what they are doing is trying to preserve their profit levels despite the non-investment and a smaller cake, of course at the expense of the employees, that is, a greater exploitation.

We can make every effort, we can push with all our productive forces and good intentions so that the 15 engines finish igniting, but they will not start until two central and strategic aspects are resolved, which are those that are preventing economic reactivation: 1 ) the permanent and criminal attack against our currency and 2) the fall in oil exports. To which we must now add a third aspect, the confinement due to the coronavirus pandemic.

Attack on the bolivar. When imperialism, within the framework of economic warfare, attacks the bolivar and induces its depreciation, it not only affects the prices of all goods and services, generating hyperinflation and consequently the loss of purchasing power, but also simultaneously has another effect: the contraction of national production.

In ordinary terms, the sequence is as follows: when they manipulate the exchange rate and it goes from 10 Bs / US $ to 20 Bs / US $, so that whoever, for example, produces shoes must pay a higher price for raw materials and inputs, and therefore, the price of the pair will increase from 100 Bs to 200 Bs because the shoemaker will not assume the cost, he will seek to transfer it to the price. The same will be done by the one who produces shirts, pants, dresses, chicken, meat, eggs, milk, bread, flour, oil, antihypertensives, insulin, painkillers; the mechanic, the hairdresser, the plumber, etc. will also behave the same way.

RELATED CONTENT: Unless you’re Working to Create a Dictatorship of the Proletariat, you Won’t Defeat Capitalism

Since the nominal wage is the only commodity that does not adjust each time the exchange rate increases (in Venezuela), the purchasing power of the employees decreases, so if you are a worker who bought a pair of shoes every six months, two pants, three shirts and also purchased 1 box of monthly antihypertensives, 5 kilos of meat and two cartons of eggs, you will no longer be able to do it in the same amount, because your salary is not enough. You will set priorities, decrease the amount of meat, and mend the pants, shirt, and shoes. You will not even go to the shoe store to see the prices because you have no way to buy them. For his part, the shoemaker is not going to reduce the price of shoes, he simply will not produce them if there is no one to buy them, or he will produce less. In the logic of capitalism, he will never produce losses.

The amount of money in the economy. If before the manipulation of the exchange rate, 10 pairs of shoes were produced and sold, 1,000 Bs were required in that economy to produce and buy them. When the price is doubled as a result of an external factor, in this case the attack on the bolivar, the only way to produce and consume the same number of shoes is to double the amount of money circulating in that economy from 1,000 to 2,000 Bs. Otherwise, and if the same 1,000 Bs are maintained, only 5 pairs can be produced and consumed, that is half.

What has been happening in Venezuela in recent years is that while pushing to reactivate production, another force moves in the opposite direction, canceling any effort, we refer to the attack on the bolivar.

Stopping the attack on the bolivar is strategic in this economic war against the Venezuelan people.

In the meantime. In hyperinflation, under daily currency attack and an induced depreciation of the bolivar that has reached 350 billion percent since January 2013, production and consumption levels, both for households and for the government, can only be restored by increasing the amount of money in the economy, which not only has not increased, but on the contrary has fallen 88% in real terms since 2013 according to the BCV.

Let us ask ourselves, how could the 15 engines start if, in the face of such hyperinflation, induced by the attack on the bolivar, there is not enough money to produce and consume? Household consumption has fallen 52% between 2013 and 2018, while that of the government has decreased 30% during the same period.

Those who design monetary policy have argued that increasing the amount of money would generate inflation, a theory that has collapsed with the exorbitant increase in money in the US and Europe to rescue companies as a result of the pandemic.

The productive engines in Venezuela will start when we strategically defeat the attack on the bolivar and recover oil exports. We will focus on this last aspect in the next article. While this is happening, it is urgently necessary to increase the amount of money and get rid of monetarist theoretical paradigms. This greater amount of money coupled with a greater tax pressure on the bourgeoisie is the source for the so urgently needed increase in wages.