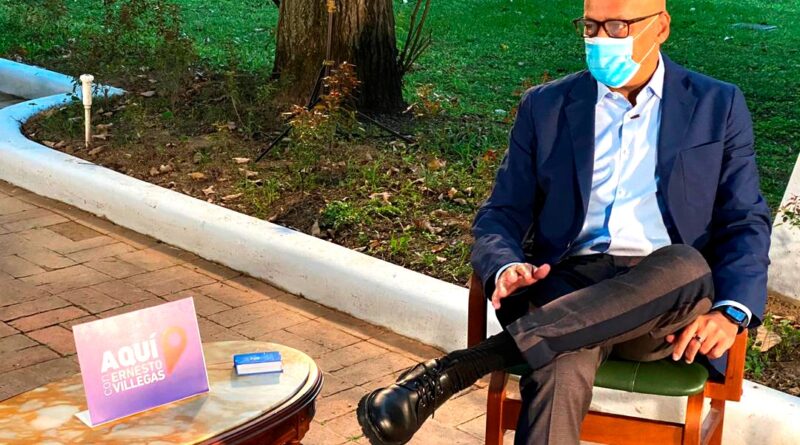 Venezuelan Communication, Tourism and Culture minister, Jorge Rodríguez, said that if President Nicolás Maduro had acted in the same way as presidents such as Donald Trump, Jair Bolsonaro or Lenín Moreno, to date Venezuela would have no less than 10,000 dead and more than 700 thousand people infected, but the number of Covid-19 releted deaths in Venezuela is 381. This was expressed this Sunday during his participation in the TV show “Aqui con Ernesto Villegas”, a new interview show conducted by the head of the Culture ministry, Ernesto Villegas, through digital platforms and broadcasted by VTV.

He commented that the Venezuelan administration knew how to prepare itself to face this situation, for this reason the provision of beds, respirators, face masks and other necessary supplies was sought to guarantee the care of all infected patients, despite the difficulties posed by the economic blockade imposed against the country by the United States.

In addition, he emphasized that the pandemic has made it possible to demonstrate that the humane and supportive model, which prevails in nations such as Venezuela and Cuba, is much more efficient for the management of the disease, than the selfish capitalist model of the United States, Brazil and other nations led by the right.

He stressed that in Venezuela the number of recovered patients is significant and the mortality rate is very low. This is due to the timely government action.

“The (unconventional) war and the blockade are real. We have faced tougher situations than Cuba during the special period. We are not allowed to import medicine or food … The opposition had a plan, they awakened a macabre spirit, to ensure that Venezuela did not overcome Covid-19. They believed that Venezuela was going to collapse due to the pandemic, they rubbed their hands together thinking about us giving up. They were betting on the inability to face the situation, and it turned out exactly the opposite,” he said.

Regarding his [own case], Rodríguez explained that despite complying with all the recommended preventive measures, such as social distancing, hand washing and the use of a face mask, among others things, being a public servant who is constantly working on the street posed a very high risk of exposure of infection.

RELATED CONTENT: Jorge Rodriguez on PCV and PPT Joining PSUV: I Have Been in Meetings – Apart from Mistakes, We Have Always Been Generous with Allies

He asserted that the moment he learned the positive results of the Covid-19 detection test was very hard, as it is a little-known disease this generates greater fear for those who suffer from it, however, he specified that fortunately he presented mild symptoms and is currently fully cured.

In this sense, he explained that the factors that determine the lethality of the new virus are three: the strain of the virus (its infectious capacity), the viral load (exposure to the virus) and the immune system or other diseases suffered by the person.

He explained that in Venezuela we have been learning about the disease. At first it was believed that it was a disease of the respiratory tract, but now it is known that it is rather a disease that attacks the immune system of people, inflammatory and obstructive. 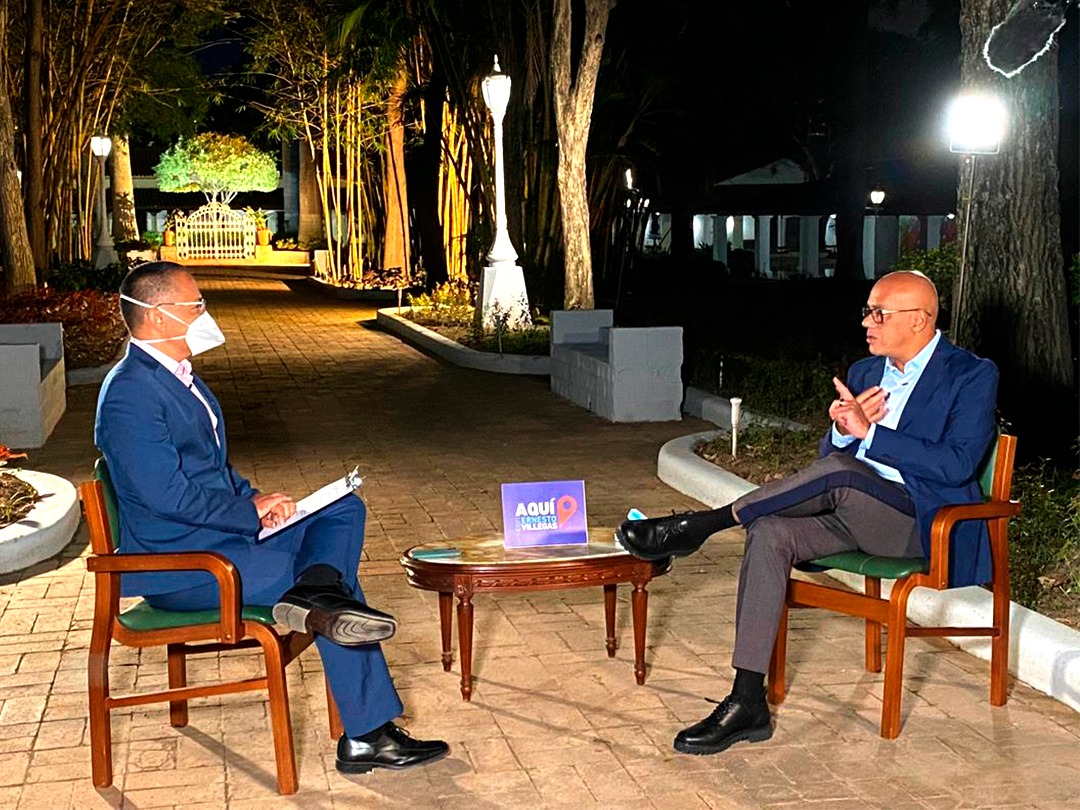 In addition, he commented that people already recovered from Covid-19 are not infectious, since “the virus does not infect you twice and there is no possibility of infecting others.”

He added that in Venezuela 80% of the cases are asymptomatic, which is why infections are so fast and it is necessary to maintain preventive measures to take care of each other.

Regarding the electoral scene, he stressed that the basic promise of the revolutionary forces for the parliamentary elections on December 6 is to restore peace in the country and lay the foundations to create a more modern and efficient State.

Rodriguez specified that the election of a new National Assembly (AN) will send a very powerful message to the world that Venezuelans settles its differences through the channels established in the Bolivarian Constitution, not through coups, theft of resources and attacks, as the extreme right intends to do.

“The message is that Venezuela deserves to be respected and have access to its resources like any country in the world,” he added.

Likewise, he stressed that it is necessary to consolidate a great revolutionary union to recover the AN, so that this institution fulfills its parliamentary, legislative and comptroller functions and the resources of the State can be recovered, which have been stolen by the deputy Juan Guaidó and his partners in crime.

In this sense, he stressed that all the guarantees for participation are given, more than 107 registered parties are able to participate, and he recalled that, despite the smear campaign, there is no more reliable electoral system in the entire world than the Venezuelan one, managed by the National Electoral Council (CNE).

He also expressed his agreement with the call of the Venezuelan Episcopal Conference (CEV) to the population and political actors to participate in the 2020 Parliamentary Elections.

“Beyond the fact that the bishops of the Venezuelan Episcopal Conference have a clear political position in favor of right-wing interests and the Venezuelan opposition, they have issued a very interesting point of view about the need to participate in the elections, and in that sense we agree,” he said.

He also mentiond that he will always support political organizations that assume a nationalist, peaceful and constitutional stance, hence his rejection of Popular Will being considered a political party, since [that group] has only led to terrorist acts against the welfare of the nation.

“It is one thing for you to call yourself a political party to act with violence protected by that; attempting the assassination of the President of the Republic, promoting an invasion of the country, supporting yourself with paramilitaries and drug traffickers, that cannot be conceived as a political action, it is terrorism, which is not allowed anywhere in the world, that is why Popular Will is not a political party,” said Rodríguez, who celebrated the decision of the Supreme Court of Justice (TSJ) to suspend its directive in July. 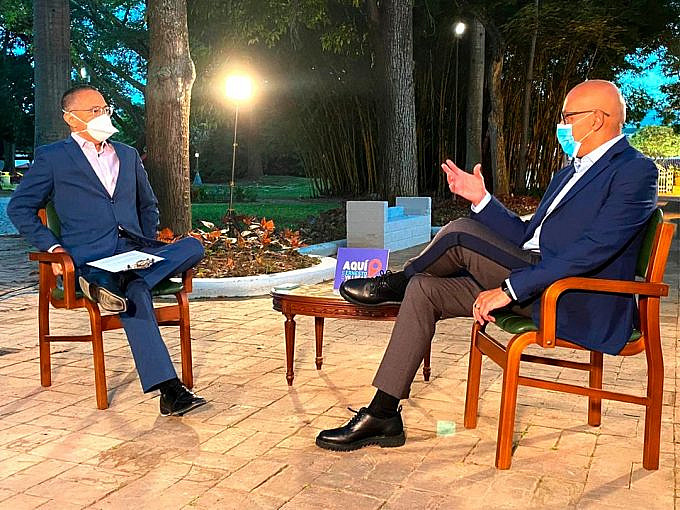 He commented that the PCV has chosen in the past to take a candidate from Chavismo who has not been favored with a seat to try to subtract votes from the Great Patriotic Pole (GPP), however, it has not succeeded because in his opinion people are aware of who the ones are really standing up to the attacks against the country.

He asserted that the United Socialist Party of Venezuela has tried to maintain unity within the National Assembly with the GPP, but it is President Nicolás Maduro who is fighting and standing up against imperialism, invasion attempts, a pandemic and assassination attempts.

Regarding the return to school, Rodríguez applauded the proposal of the Venezuelan president, Nicolás Maduro, to establish a debate on the development of the new school year.

In his opinion, the virtual class system at all educational levels in the country will be extended for the duration of the Covid-19 pandemic.

However, he pointed out that it is necessary to determine an educational process that integrates several factors: “I think that we are going to spend some more time with classes remotely, but we have to find a mechanism so that there is more interaction for the children, parents and representatives with educational institutions,” he said.

Minister Rodriguez added that in Venezuela another Caracazo will not be happen again, since he stressed that the people that rose up in 1989 are the ones that have power at this time, through the creation of a broad base social and participation system.

“Chávez planted a deep democracy in Venezuela. The redemption of the poorest, the social justice that those social democratic parties proclaimed so much in the Fourth Republic appears as a reality in the government of Hugo Chávez and now there is a deep awareness in the people of Venezuela about who is truly responsible for the actions that now force us to resist as we are resisting,” stated Rodríguez.