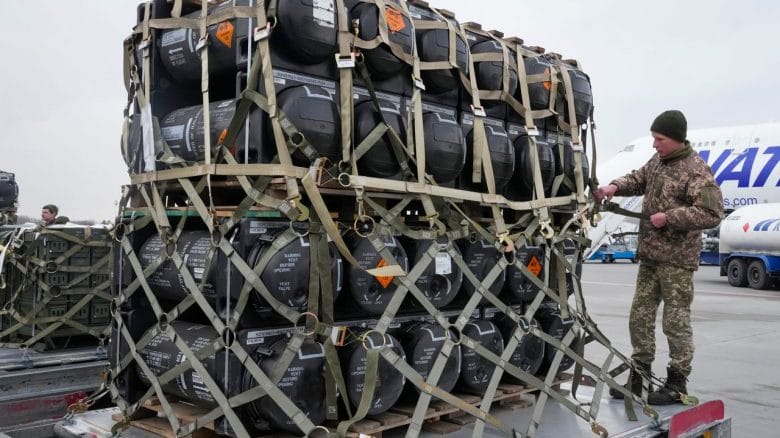 Weapons from the US and Europe are being supplied to Ukraine. Photo: Efrem Lukatsky/AP

The narrative surrounding the conflict in Ukraine changes according to who is speaking, some of it lacking any substance or rationality. Also, an inevitable indebtedness will afflict Ukraine for decades to come, due the lend-lease program the US approved in April.

For two months now, hostilities have been continuing in Ukraine, which the Russian Federation calls a special operation and Ukraine calls a war, although neither side has formally declared war.

Blinken’s propaganda and captured western weapons
In April, according to the statements of the Russian leadership, the second stage of the operation began. According to the agreements in Istanbul, Russian troops left the northern regions of Ukraine at the end of March, concentrating on the southeastern regions. Anthony Blinken said that Ukraine had won the battle for Kyiv, [1] although it is obvious that it would be impossible to storm the big city with forces of just 20-30 thousand. But Blinken’s propaganda requires at least some “victories.”

In the second stage of their operation, the Russians engaged in the targeted destruction of fuel bases and military depots. Air raid alerts were heard daily throughout Ukraine. Ukrainian air defenses bring down part of the missiles, exploding fragments of which often fall on residential buildings. At the same time, the West is stepping up arms supplies to Ukraine, as much of the previous supply has either been destroyed or become a trophy. Since Russian aircraft are bombing military trains, deliveries are usually made in small batches on civilian transport. The Russian media publish daily footage of captured Western weapons being handed over to the militias of Donetsk and Luhansk.

Ukrainian and Russian media change rhetoric
There have also been some changes in the rhetoric of the Ukrainian and Russian media. Naturally, the media on both sides say that “our troops are only hitting military targets,” while the enemy is “hitting only humanitarian and civilian targets.” The Ukrainian media daily promises an imminent counteroffensive as soon as Western weapons reach the Armed Forces of Ukraine. The Russian media say that their army is methodically and determinedly breaking through the fortifications of the Ukrainian troops, capturing new villages and cities daily in the Donbas direction, as well as thousands of POWs. It is not possible to verify the reality of these statements, since both sides have a ban on filming the results of strikes or troop movements.

In April, the Ukrainian media began to make more absurd statements about the “poverty of Russians,” who allegedly steal even toilet bowls from captured houses. Even President Zelensky is spreading such misinformation [2]. According to him, the Russians allegedly want “to see a normal life in Ukraine, steal a toilet bowl and die there.” The absurdity of such statements is beyond all criticism, but in military propaganda logic always suffers.

RELATED CONTENT: NATO and AUKUS: the makings of an Asian NATO

In most cities that are heavily fought over, there remained few untouched buildings. Even after being captured by the Russian army, they are being fired upon by the Ukrainian army. These cities often lack water and electricity. Refugees continue to leave the country. From the territories controlled by Kyiv—to the EU and Moldova, and from the territories controlled by the Russian Federation—to Russia and Belarus. Overall, about five million people have already left the country. Furthermore, seven to nine million are internal migrants, who settled mainly in western Ukraine. The Ukrainian authorities are not letting males aged 18 to 60 out of the country, so men who do not want to fight are forced to either pay thousands of dollars in bribes to Ukrainian border guards [3], or illegally cross border rivers or trek through the mountains, hiring smugglers, risking being robbed and killed on their way out.

For “financial injections from the West,” read “loans”
There are few working enterprises left in the country, but even here workers’ wages are being cut [4]. In fact, the Ukrainian economy lives on financial injections from Western countries; however, these are mostly loans, which will will need to be repaid. In other words, almost everything that is presented in the West as assistance or aid to Ukraine is an opportunity to earn money for Western bankers and arms traders.

Ukrainian economist Oleksiy Kushch emphasizes that even in the context of the war in Ukraine, no one plans to write off its debts. He writes: “Two messages from our Ministry of Finance. First, Ukraine is entering the peak period of public debt repayment. In April-June 2022, UAH 167 billion will have to be paid. Second, in the context of the budget crisis, social spending will have to be reviewed in May. In normal logic, the combination of the first and second gives the only correct answer—debt restructuring. After all, war = force majeure. When people have nowhere to live and no money to buy even a minimal number of products, debts are not repaid” [5]. According to Kushch, in March Ukraine received $3.5 billion from the IMF and World Bank and now must repay $5 billion.

In the United States, they decided in April to approve the lend-lease program for Ukraine, but it is worth recalling that in a similar lend-lease situation for the USSR in World War II, the debts for this assistance remained a heavy burden for the Soviet economy. Russia, as the successor to the USSR, paid the last payments on these debts only in 2006 [6].

Ukrainian economists estimate that the restoration of the country will require from $200–500 billion. Economist Yuriy Gorodnichenko hopes only for gratuitous aid from Western countries, on behalf of which Ukraine is fighting. He writes: “Financial assistance can come from anywhere and in any form, but the main thing it is [for it] to be free. The key principle is that post-war reconstruction should not be financed by loans—Ukraine is already in a very difficult position” [7]. Even so, it is unlikely that Western bankers will be so generous.

Transnistria and Moldova
At the end of April, there were signs that Transnistria and Moldova could also become involved in the conflict. In Transnistria, the building of the Ministry of Security [8] and the airfield were shelled, two TV towers were blown up, then there were skirmishes in the area of ​​a military warehouse in the village of Kolbasnaya [9], where the largest military ammunition depot has been located since Soviet times. The Transnistrian authorities have blamed Ukraine for what is happening there [10].

Oleksiy Arestovich, an adviser to the head of the Zelensky Office, said on April 26 that Kyiv could seize Transnistria very quickly if there was a request from Chisinau [11]. Against the background of these disturbing rumors, columns of refugees (many of whom only recently fled from Ukraine) have been lining up in Transnistria and Moldova since April 26, trying to leave this region as well. However, the Moldovan President Maia Sandu has not yet decided whether or not to enter into the conflict, complaining about the lack of a combat-ready army [12].

Escalations expected in May
Nevertheless, escalations should be expected at the beginning of May, especially around May 8-9 (victory over Nazism in Europe), which is a very important anniversary for the Russian side and the LPR/DPR. And conversely it is a date that is loathed to the same extent by the Kyiv regime—as well as a number of Eastern European states. In cities controlled by the Russian Federation, the DPR and LPR are now actively restoring monuments to V. Lenin and hanging red flags on administration buildings [13]. Plans were announced to hold a victory parade in the city of Mariupol, which now lies in ruins. At the same time, Andrey Biletsky, the leader of the Azov neo-Nazis, threatened to launch a missile attack on the parade in the city center [14]. The Transnistrian authorities were also forced to cancel the May 9 victory parade due to possible terrorist attacks on the crowds [15].

Thus, the line of confrontation between the forces that supported the Soviet Union during the Second World War and the forces that collaborated with Nazi Germany throughout the region is becoming more and more clear, even if in the Western media they are trying in every possible way to whitewash and justify neo-Nazis as defenders of Ukraine.

Dmitri Kovalevich is a Ukrainian journalist, and resident of Kiev. He is a communist and member of the banned Ukrainian Communist organization Borotba.

Featured image: Weapons from the US and Europe are being supplied to Ukraine. Photo: Efrem Lukatsky/AP