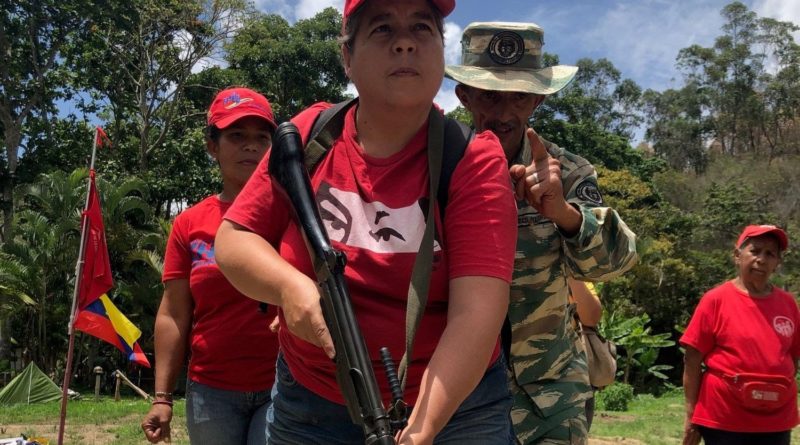 In October 2019, when a wave of protest swept over Chile, President Sebastián Piñera called out the army, invoking the “state of emergency” clause of the Constitution. The image of soldiers in the streets and the enforcement of curfew immediately evoked a dark history. Since then, the majority of the bloody repression has been carried out by the national police, which has been reporting to the military commanders in Santiago, Valparaíso, and other cities under the state of emergency.

These situations are oppressive not only for Latin America but also for countries like Canada, where Pinochet remains part of the collective memory handed down by a progressive generation that opposed his horror to its descendants. The experience also remains vivid in the minds of the many Canadians and Quebecers of Chilean origin who had to flee the Pinochet dictatorship.

Simultaneously, in Colombia as in Chile, uprisings and strikes have had to confront the armed forces, either directly or indirectly.

In Brazil, the peoples’ resistance to the right-wing Bolsonaro government has been ubiquitous since he won the 2018 elections, following the imprisonment of his main opponent, Lula da Silva.

In Bolivia, the scenario was different: the United States and its allies, backed by the army, fomented a coup d’état based on the lie that Evo Morales’s election had been fraudulent. It is known that the chief army officials involved in the coup were trained at the School of the Americas in the United States.

The experiences of Colombia, Chile, Brazil, Argentina and Bolivia all stand in stark contrast to that of Venezuela. Indeed, they are poles apart: reaction on the one hand, revolution on the other. It is not that the United States has not attempted to subvert the Venezuelan Armed Forces; indeed, much effort has been expended to try and turn them into a replica of their counterparts in those countries where reaction has dominated. The effort has not succeeded.

What is the explanation? Let us compare these different cases. In an online interview, Claude Morin, a professor retired from the Department of History at the Université de Montréal and possibly the most important Latin Americanist in Quebec, stated that the Colombian army is composed of soldiers trained to fight an insurgency, to kill guerrillas and commit massacres against any communities that may be inclined to support them. The recruits have been conditioned to perform these tasks; that is, to see people and civilians as a threat. The officers have been trained with manuals from the US School of the Americas.

In its fight against the guerrillas, the army has built ties with paramilitary groups and has contracted out assassinations. Under the term of former President Álvaro Uribe, the army received bonuses for killing peasants and then dressing them up as guerrillas (the scandal of the “false positives”). This was “an industry of death carried out in bad faith,” concludes Morin.

Until 1973, the Chilean army was considered faithful to the Constitution. But, with the arrival of the Popular Unity government, US opposition to the democratic socialism of Salvador Allende and the polarization of Chilean society caused the army to side against the government. Pinochet succeeded with his coup d’état and established a radically different military government. The coup plotters purged the army of officers and soldiers who had opposed the coup, and subsequent acts of state terrorism left more than 3,000 dead or disappeared.

The Chilean officer corps has always recruited from the elites, while soldiers have generally come from the working class. “I don’t know the extent to which the army could have been someone’s stepping stone to higher social status,” says Morin, “but I believe that the armed forces have inculcated in working-class recruits an ideology favourable to the elites, the oligarchy and the status quo.”

Moving to Argentina, Morin compares the ideology of national security prevalent during the “dirty war” in that country (1976–1984) with that of Colombia. High-ranking officers were recruited from the oligarchy; anti-Communism was the common factor holding all the factions together. “The unrest in Argentina during the 1960s, the anti-Peronist authorities, a succession of military governments between 1954 (Perón’s overthrow) and 1984 (return of civilian government with Alfonsín), and the ‘dirty war’ created a context of repression of all effective or apprehended protest against the established order, which considered the protesters as subversives.”

As a reader of the Argentine press, Morin concludes that under Macri’s presidency, the officers have been able to show their faces once more, taking their places as a bulwark against a mass uprising.

When the coup took place in Brazil, US Ambassador Gordon egged on the Brazilian officers, and the coup perpetrators were reassured by the presence of US warships off the coast. “The United States and the officials involved were concerned by Goulart’s ties to Cuba and the fact that Che Guevara had been inducted into the Order of the Southern Cross. Here again, anti-Communism came on the scene.”

In a 2003 article, Marta Harnecker states that the Venezuelan military had seven defining features that made it not only different from the ones described above, but almost the polar opposite. It served as a natural growth medium for Chavism.

First, Venezuelan officers and soldiers were profoundly influenced by the ideas and thinking of Simón Bolívar on national and people’s sovereignty. Second, soldiers in Chávez’s day were trained at the Venezuelan Military Academy, not the School of the Americas. Third, the historical conditions were different. Guerrilla insurgency was not a big problem, so indoctrination in the Cold War anti-communist ideology was much less necessary. In fact, when Chávez’s generation entered the academy in 1970, guerrilla activity had already been rooted out. Fourth, the Venezuelan military was not controlled by an elite military caste. Fifth, in 1989, the popular uprising known as the “Caracazo” politicized many lower-ranking officers, making them sympathetic to left-leaning ideas and more hostile to the political elite. Sixth, the decade preceding the Caracazo, characterized by an abrupt rise in socioeconomic inequality, had already begun to radicalize lower-ranking officers. Finally, Chávez’s proposal to restructure the armed forces after his election in 1998 gave them a new purpose and a way to channel the frustrations built up in previous decades.

These characteristics have laid a solid foundation for the consolidation of the Venezuelan civilian-military union and efforts to fend off the continual US-led attempts to overthrow the government, from January 2019 until the present, thus confirming that revolution is winning out over reaction, not only in Venezuela but throughout the region.

Featured image: The Venezuelan people are prepared to defend their country. Photo: Sputnik