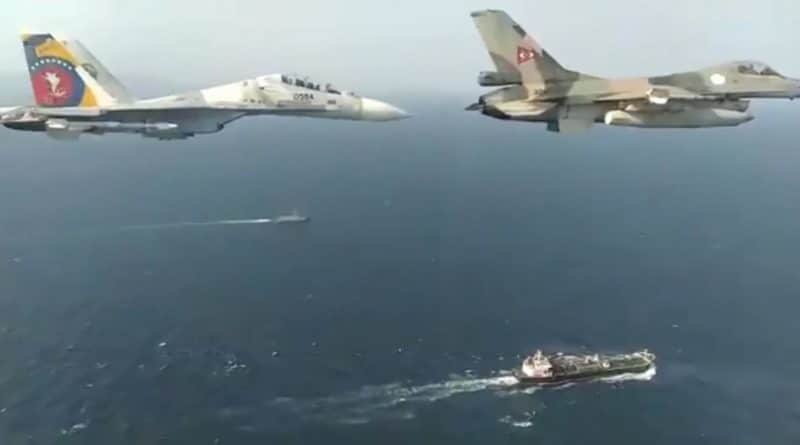 The second Iranian tanker, the “Forest” that arrived in Venezuelan waters this Monday, May 26, has as cargo, in addition to gasoline, spare parts and additives necessary for the reactivation of Venezuela’s refineries.

“The Iranian Forest tanker continues to navigate Venezuela’s territorial waters towards the Paraguaná peninsula. According to authorities, spare parts and additives from Iran will boost the capacity of Venezuelan refineries,” wrote the journalist.

The ship was in the company of the Venezuelan Navy and the Bolivarian Air Force, as well as the “Fortune”, the first ship that arrived in jurisdictional waters on May 23.

The “Forest” docked in the early hours of this Monday, May 25, at the El Palito refinery, located in Carabobo state. The arrival of the other three boats is expected next: Clavel, Faxon, and Petunia.

A nice video footage of the Iranian tanker Fortune being escorted by 2 Venezuelan F-16 and 2 Sukhoi mk30 https://t.co/OCOjyYoPTa

The Minister for Petroleum and the Vice President for the Economic Area, Tareck El Aissami expressed his gratitude to Iran on behalf of the government and the Venezuelan people for the help it offers amid sanctions, the blockade imposed by the United States and in the face of the pandemic affecting the world.

“Thank to the government and people of Iran, President Hasan Rohaní, Ayatollah Khameneí and all the authorities who have expressed themselves firmly, courageously in guaranteeing and continuing to advance in the energy cooperation agreements that have long existed between Iran and Venezuela,” said El Aissami during a welcome message to the Persian crew at the El Palito refinery.

He reiterated that the Iranian ships carry fuel, additives, spare parts that will allow the refineries to move forward.

“With this arrival of the “Fortune” and the other ships that are already in the Venezuelan territorial sea, within the exclusive economic zone and that will continue to arrive in Venezuela, the self-determination of the peoples is expressed, we have the right of freedom of trade, to bilateral cooperation with any country in the world, like this one that has deep roots,” declared El AIssami.

Featured image: A squadron with two F-16 and two Sukhoi mk30 escorts Iranian tanker Forest upon arrival to Venezuelan waters. Venezuelan F-16’s were acquire in the 80’s and since early 2000 the US has ban the sale of parts but Venezuela have develop its own technology to keep them operational.