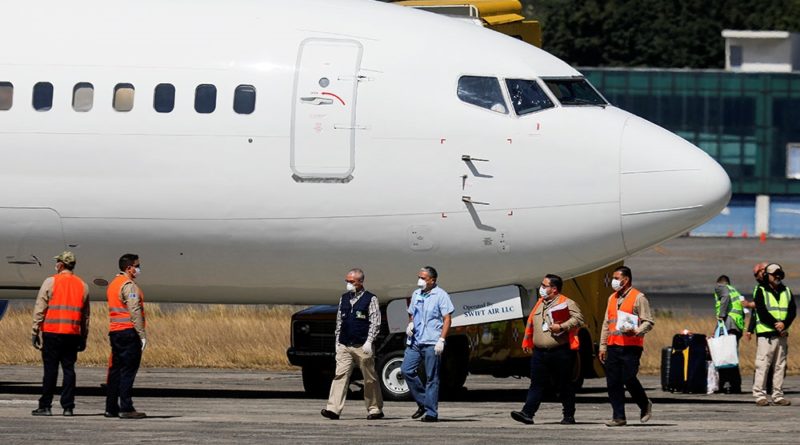 Mexico and Haiti have detected coronavirus infections among migrants deported recently from the United States, officials said on Tuesday, part of a growing trend of contagion among deportees. This in addition to  Guatemala’s suspension of ICE flights due to the high number of infected migrants.

Three Haitians who arrived in the Caribbean country two weeks ago tested positive while in quarantine, a Health Ministry official told Reuters. The flight had raised objections from human rights advocates worried about exporting the virus to the Western Hemisphere’s poorest country.

In the Mexican border town of Nuevo Laredo, one man deported from Houston infected 14 others at the Catholic church’s Nazareth migration shelter, state authorities and the city’s bishop said. Cubans, Mexicans, Hondurans and a migrant from Cameroon were among those who caught the virus, officials said. The 15 who tested positive, who include three children 16 years old and under, have been placed in isolation, shelter authorities said.

It is not clear where the deportees contracted the virus, but the new cases led to calls for deportations to be suspended unless U.S. authorities can test migrants before they leave the country.

Workers at some U.S. deportation and migrant detention facilities have tested positive for the virus, U.S. Immigrations and Customs Enforcement has said.

Haiti so far only has 57 confirmed cases of COVID-19. Haiti’s prime minister, Joseph Jouthe, said another flight carrying more than 100 Haitian deportees was expected this week.

“These are Haitians, they are coming home, we must accept them,” he told a local radio station. Jouthe did not mention the infections on the earlier flight.

U.S. Representative Andy Levin, a Democrat, said on Twitter that the new flight to Haiti should be stopped to prevent a wider spread of the disease.

“These deportations are immoral, and they put both Americans and Haitians at risk,” he wrote.

Guatemala has temporarily suspended flights while officials from the U.S. Centers for Disease Control and Prevention (CDC) review the test results of an April 13 deportation flight to Guatemala.

Guatemalan President Alejandro Giammattei said on Monday a total of 51 migrants deported by the United States to the Central American country had tested positive for the coronavirus.

Neither the CDC nor the U.S. Department of Homeland Security, which oversees deportations, has commented on the number of cases among deportees.

Featured image: Government officials stand next to a plane carrying migrants deported from the US at La Aurora International airport, in Guatemala City [File: Luis Echeverria/Reuters]