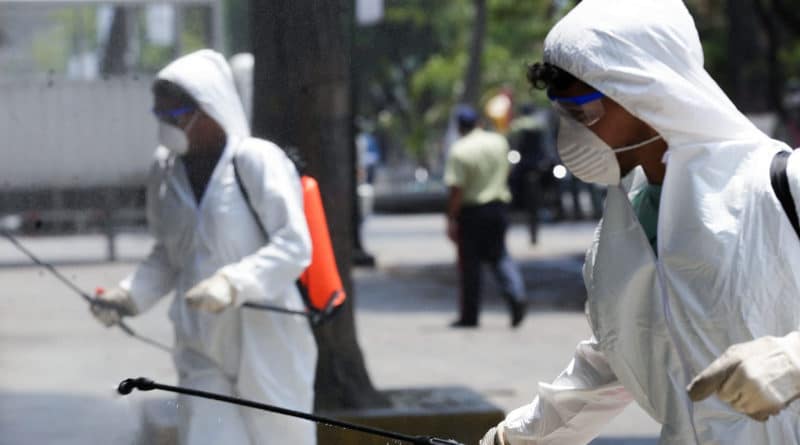 Venezuela confirmed 10 new cases of coronavirus (Covid-19) on Wednesday bringing the number to 298 infected, reported President Nicolás Maduro. In statements broadcast by Venezolana de Televisión from the Poliedro de Caracas, the Venezuelan head of state detailed that two cases are from Táchira state (border with Colombia) and eight in Nueva Esparta state.

President Maduro explained that the two cases registered in the Táchira state are not related to migrants who have entered through the border with Colombia.

Of the total number of cases, President Maduro explained, Venezuela has 122 people recovered, representing 42% of cases, while 85 people remain in sentinel hospitals, 54 in Comprehensive Diagnostic Centers, 27 cases in private clinics and two in isolation in hotels. Venezuela also records a figure of 10 total deaths from the outbreak.

During his address, President Nicolás Maduro reminded the country of the importance of the joint effort of the people and government, to maintain preventive and health measures to prevent the spread of the virus. For this reason, he thanked the work carried out by Venezuelan society, which has remain in their homes for more than 40 days.

He also urged the rulers of other nations, who intend to lift the quarantine soon, to be aware and avoid that there may be a re-emergence of the virus, worse than the situations registered already. “We are facing a terrifying pandemic. Taking an unthinking step in the United States or in Europe, could generate a worse outbreak than what is currently happening. I ask for awareness in the world,” he stressed.

In the early hours of the afternoon social networks in Venezuela over-flowed with information on an alleged protest/looting in the city of Cumanacoa, Sucre state (east of Venezuela).

During the first week of the quarantine in Venezuela, right wing influencers spread rumors of looting but using all photos or videos of incidents in Colombia but today there actually was an irregular situation that has not been yet properly clarified by local authorities.

The economic crisis in Venezuela, aggravated by US sanctions and blockade, and more recently the radical drop in oil prices, are putting an additional tension on the exchange rate that has move from Bs. 75.000 per US dollar two weeks ago to Bs. 185.000 per US dollar as of today. This situation adds an explosive element to the already not-under-control inflation spree in the South American country.

Right wingers have been for weeks dreaming on this…when you analyze all images and videos in this trend you will see that it looks more like an orchestrated protest ending up in very localized attempts of looting…this have a name and last name: US Imperialism… #Cumanacoa https://t.co/EoHJUD3IAv

Looting and protests for food have been seen in Colombia, Ecuador, Peru and Brazil in recent weeks but Venezuela was immune to that situation due to the CLAP program which delivers a box of food to more that 6 million households in Venezuela almost for free and the stimulus bonuses paid with the Patria system.

In recent days people have complained of disruptions in the Clap program, of people not receiving it and other people complained because they hadn’t received the stimulus bonuses paid by the Venezuelan government through the Patria system to alleviate the crisis and the social distancing effects on households economies.

Regardless of all these facts, an analysis of videos and images posted on twitter allows Orinoco Tribune to state that this might be a coordinated political protest that ended up in some isolated incidents of looting.

Local authorities still have to provide their version of the incidents. In the end, it might be a combination of the variables detailed above, complicated by the negative impact of Covid-19 social distancing.