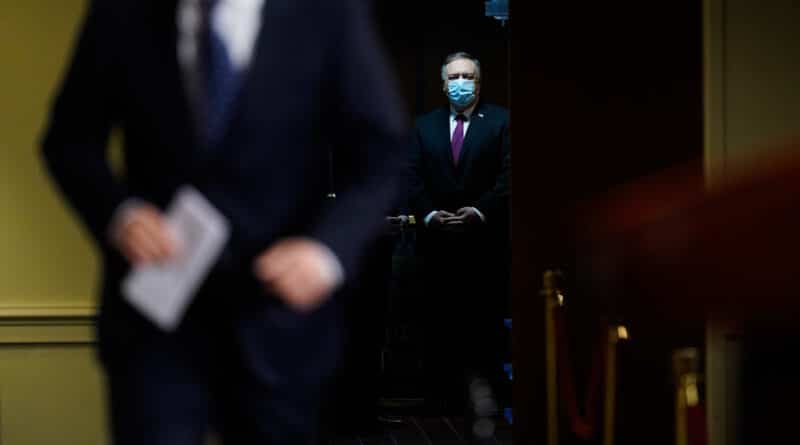 In what are likely his final few days in office, Secretary of State Mike Pompeo has been taking a number of increasingly outlandish and aggressive policy steps.

Yesterday, at an event at the National Press Club in Washington, D.C., Secretary of State and former CIA director Mike Pompeo claimed that “al-Qaida has a new home base: it is the Islamic Republic of Iran.” Offering little evidence, he warned the journalists and other figures present that, “We ignore this Iran-al-Qaida nexus at our own peril…We must confront it. Indeed, we must defeat it.” “Iran is the new Afghanistan” he added, referencing the illegal U.S. invasion and 20-year occupation that began under the Bush administration. Far from pushing back on his assertions, those present applauded Pompeo as he finished his remarks, which came amid a flurry of increasingly outlandish and aggressive policy steps he has taken in the last days of the Trump administration.

There are a number of problems with his assertions, not least that Iran is a Shia theocracy led by Ayatollah Khamenei, while al-Qaeda is a Sunni supremacist organization that regards Shi’ism as entirely heretical. Furthermore, Iran has been battling al-Qaeda and ISIS in Iraq and Syria. Meanwhile, the U.S. government has openly supported what it calls “moderate rebels” in the region, despite the fact, as the Washington Post admitted, those “moderates” are difficult to distinguish from and intermingled with Jihadist forces like al-Qaeda’s Syrian wing al-Nusra. That Tehran was secretly sheltering and promoting its sworn enemy would be surprising, to say the least.

RELATED CONTENT: Mike Pompeo is the Worst Secretary of State in US History

Pompeo made the announcement just hours after meeting with Mossad chief Yossi Cohen. Early this morning, Israeli jets using U.S. intelligence bombed targets in eastern Syria, killing 57 people. According to American officials, Pompeo gave his blessing to the attack, claiming that the warplanes were striking warehouses filled with Iranian weapons.

Earlier in the week, the Secretary of State also designated Yemen’s Houthi rebels and the government of Cuba as terrorists, moves that were immediately condemned by human rights groups. Refugees International wrote that, “it is difficult to imagine a more irresponsible decision,” as the announcement will stymie any moves toward peace. Oxfam America’s Humanitarian Policy Lead Scott Paul made a similar statement, predicting that Pompeo’s actions “will only compound the crisis for millions of Yemenis fighting for their survival.”

On Monday, without a shred of irony, Pompeo condemned Cuba for its supposed, “malign interference in Venezuela and the rest of the Western Hemisphere.” The United States has supported multiple coup attempts in the past two years against the Venezuelan government, as well as backing a (since defeated) far-right military putsch in Bolivia. Last week, Pompeo reaffirmed the U.S.’ commitment to the leader of those Venezuelan coups, Juan Guaidó, recognizing him as the legitimate “Interim President” of the country, despite minimal domestic support. Post-Brexit, the European Union took the opposite decision, dropping their support for him after President Maduro’s United Socialist coalition won 253 of the 277 seats in the country’s National Assembly last month. Thus, both Guaidó and the Trump administration are increasingly isolated.

Last Tuesday, Pompeo also made a point of receiving representatives of The Epoch Times, a far-right fake news outlet associated with the Chinese Falun Gong cult. During their visit to the State Department, the 57-year-old Kansan encouraged and spread wild theories of his own. “The Chinese Communist Party is here in America,” he claimed, insisting that the U.S. must also “protect itself from this Communist threat in China.”

While Pompeo will (presumably) be leaving office very soon, there are more than a few rumors that he already has his eyes set on a presidential run in 2024. Vanity Fair suggests that his actions, such as travelling to Georgia to support Republican candidates up for election, “look like a 2024 dry run.” Unlike many in his party, he has stayed decidedly loyal to Trump until the end, which will likely earn him credit with the president’s massive base of supporters and allow him to position himself as the continuity Trump candidate if he is barred from standing himself.

If Pompeo does decide to throw his hat into the ring, he would likely have support from Israeli Prime Minister Benjamin Netanyahu, who he visited in November. Pompeo dined at an illegal West Bank settlement, and asserted that Israel has every right to the territory, a move that delighted many inside the country.

As former head of the CIA, Pompeo is no stranger to exaggeration or spreading misinformation. “We lied, we cheated, we stole… we had entire training courses [on] it,” he infamously said at a talk at Texas Tech University in 2019. In his last days in office, he seems to have been putting his training to good use.