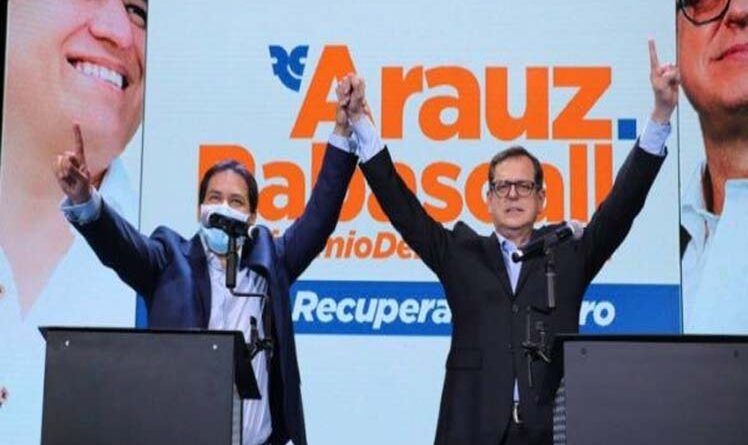 Four years after turncoat Lenin Moreno claimed the presidency and turned the country inside out, Ecuador will elect a new president on February 7, 2021. Moreno betrayed the citizen’s revolution he had promised to continue, and with his approval rating somewhere between 7 percent (CEDATOS, September 2020) and 16 percent (Atlas Intel, December 2020), Moreno will not be seeking re-election.

After winning the presidency in 2017, Moreno turned his back on his predecessor and nominator Rafael Correa and double-crossed the PAIS Alliance party they both belonged to. Moreno is widely despised as a result, and the PAIS Alliance has been virtually wiped off the map, as correísta (pro-Correa) members moved over to the newly formed coalition Union for Hope (UNES), and presented Andrés Arauz as candidate for president.

Arauz’s victory in February is almost assured—recent polls give him an edge ranging from 8 percentage points (Atlas Intel, December 29) to 18 points (Perfiles de Opinion, January 5). For an outright win an Ecuadorean president needs 40 percent of the vote (Perfiles de Opinion gives Arauz 43 percent) and a 10-point lead, otherwise a runoff is held. Numerous attempts to block the formation of a new party and Arauz’s candidacy, and to delay the election, were perpetrated by Moreno and the National Electoral Council (CNE), but UNES cleared all the hurdles.

Moreno’s successor as candidate for the tattered remains of the PAIS Alliance, Ximena Peña, is supported by a paltry one to three percent of poll respondents.

The key questions posed by the election are the following: What is Arauz’s alignment—will Correa’s citizens’ revolution continue? What will Arauz’s election mean for 21st century socialism in Latin America? Most importantly, once elected, will Arauz turn his back on his constituents as Moreno did?

Moreno’s betrayal of his campaign promises was nothing new for an Ecuadoran president, nor was his decision not to rerun. Correa, president from 2007-2017, was the first president to be re-elected in Ecuador since the restoration of civilian rule in 1982, and the only president to even finish his term since 1996.

While Correa wasn’t universally adored, he enjoyed great popularity. He largely honoured his anti-neoliberal and anti-imperial campaign by joining the Bolivarian Alliance for the Peoples of Our America (ALBA), intentionally defaulted on “illegitimate” foreign debts in 2008, spurned the International Monetary Fund (IMF), closed the US Air Force base at Manta in 2009, and presiding over a wave of nationalizations and expropriations that greatly increased state revenues from extraction industries. A 2010 law increased “the government’s share from 13% to 87% of gross oil revenues.” Under Correa poverty was reduced from 37 percent to 22 percent while public spending on healthcare and education increased astronomically.

Moreno was Correa’s nominee and promised to follow the same path. “We will continue the transformation of Ecuador which began 10 years ago under the leadership of Rafael (Correa),” claimed Moreno the day he took office.

In early 2019 Moreno took a $4.2 billion IMF loan and at their insistence implemented spending cuts to healthcare (amounting to 64 percent) and education. In April 2019 Moreno annulled Julian Assange’s asylum and left him at the mercy of the UK courts. He pulled Ecuador out of ALBA and the Union of South American Nations (UNASUR). Decisively, he reversed Correa’s laws and “opened up the oil sector to private operators.” Widespread protests resulted.

Moreno also terminated Ecuador’s agreement with Cuban doctors. As COVID-19 struck, Ecuador’s hospitals and morgues quickly reached capacity, and in April international media published tragic stories about hundreds of bodies left out in the street. The nation’s COVID-19 per capita death rate is one of the world’s worst —about 60 times that of Cuba.

“I think Lenin Moreno is a Shakespearean traitor in a number of ways,” said former Minister of Foreign Affairs Guillaume Long. “He betrayed Correa, he betrayed his party, he betrayed his electorate. He actually said a few weeks after being elected and being sworn into power that he hated the people who voted for him… So I think he betrayed Ecuadorians, and he betrayed democracy, and he certainly betrayed Assange… I think there are a number of reasons why he did this: one of the fundamental reasons is realignment in the US sphere of influence.”

Arauz makes no apologies for his alignment with Correa. After Correa was banned by the CNE from standing as Arauz’s vice president he “accompanied” Arauz’s campaign. Arauz is a member of the Citizens Revolution Movement within UNES, and indicates openly that Correa will be one of his principal advisors.

If Arauz stays the course the revolución ciudadana will continue. Arauz is campaigning on the promises of rolling back Moreno’s privatizations, standing firm against the IMF and international capital, recuperating education and healthcare, and restricting capital flight. He promises to reinstate Assange’s Ecuadorian citizenship and assert Ecuador’s sovereignty in international affairs.

What will Arauz’s election mean for 21st century socialism in Latin America?

Inter-Caribbean and Latin American partnerships will benefit from Arauz’s victory. Arauz has promised to heighten Ecuador’s commitment to the Community of Latin American and Caribbean States (CELAC), and he will seek to return Ecuador to ALBA and UNASUR. “We’re going to be one the main promoters of regional integration for historical reasons,” affirmed Arauz in a recent interview, “and also for practical reasons.”

Arauz’s candidacy has been endorsed by Bolivia’s Evo Morales, Argentina’s Alberto Fernandez and Christina Kirchner, and by the leaders of the Puebla Group that includes Bolivia’s Vice President David Choquehuanca, former Brazilian Presidents Dilma Rousseff and Lula, Paraguay’s Lugo, and Uruguay’s Mujica, among others. It’s certain that an Arauz victory will mean Ecuador’s departure from the Lima Group, dedicated to overthrowing Maduro.

Internationally, the election of Arauz all but guarantees that Ecuador will return to the orbit of Latin America’s socialist and progressive nations, joining Bolivia, Venezuela, Cuba, and Nicaragua in a powerful and more radical resurgence of the pink tide.

Will Arauz betray his constituents as Moreno did?

Arauz himself credits Moreno’s slim margin of victory and his self-effacing, compromising political career as primary reasons for his compromise with right-wing runner up Guillermo Lasso, who is again contesting the presidency.

A significant change since 2017 is the renewal of Pachakutik the party, now polling in third place. Formed in 1996, Pachakutik advances the interests of Ecuador’s Indigenous peoples and is generally backed by the Confederation of Indigenous Nationalities of Ecuador (CONAIE).

CONAIE is one of the most significant actors in Ecuadorian politics. The militant organization is at the heart of the nation’s social movements that have broken presidencies, mobilizing huge chunks of the population for organized demonstrations against neoliberalism, IMF loans, privatizations, and environmentally damaging extraction projects. CONAIE is left-wing and anti-neoliberal, and doesn’t align with Correa or Arauz. The renewal of Pachakutik constitutes a critique of correísmo from the left, which is not discouraging for the long-term prospects for socialism in the region. Arauz has made overtures to CONAIE, but in 2017 it supported Lasso in the runoff. This unresolved dynamic could prove critical if elections go beyond the first round.

Right-wing outlet Americas Quarterly seems confident that Arauz will stay the course. In 2017, following Moreno victory Patricio Navia encouraged him to “break from his predecessor,” and described Moreno’s campaign as “signaling to the international community and Correa’s opponents that he will implement much needed reforms to restore fiscal discipline.” Arauz, on the other hand, was portrayed as a staunch correísta and “very ideological” in a recent article. “I think if Arauz is elected, it won’t be him who governs,” said think tank researcher Daniel Baquero in the article, “it’ll be Correa.”

When asked if Arauz could betray his constituency as Moreno has, political analyst Jesus Rodriguez-Espinoza confided that “there is always a risk. But from reading between the lines in Correa’s interviews and Arauz’s statements, it doesn’t seem possible.”

“Arauz will win unless they steal it from him,” wrote Steve Ellner, historian and associate managing editor of the journal Latin American Perspectives. “Arauz is committed to Keynesian anti-austerity politics. I believe he will follow through on that… The main issue is whether he will force the IMF to provide Ecuador better terms, much the way Nestor Kirchner did when he came to office. Being a dollarized economy, which he says he will not alter (even though he, like Correa, thinks it was a mistake in the first place), his options are limited. The stakes are high since following Argentina, Mexico and Bolivia, the left’s victory in Ecuador will signal a big change for Latin America.”

Though shrouded by uneasiness and bitter memories, Ecuador’s upcoming election emanates a promising glow for those charting the advance of socialism in Latin America.