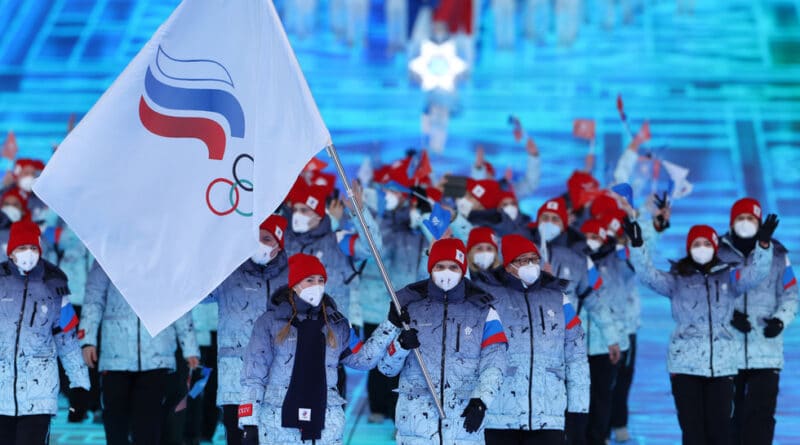 The ROC Athletes’ Commission responded after Russians and Belarusians were hit with widespread sporting bans.

The rising number of sporting sanctions being applied to Russian and Belarusian athletes is wholly unjust and amounts to “ethnic discrimination,” the Athletes’ Commission of the Russian Olympic Committee (ROC) has said.

On Monday, February 28, the International Olympic Committee (IOC) recommended not inviting Russian and Belarusian athletes to global sporting competitions due to the war in Ukraine.

The recommendation has since been followed a wide range of federations across various sports, including the likes of football governing bodies FIFA and UEFA.

The measures have been decried in Russia as depriving athletes of their livelihoods, based on political reasons.

In a statement released on Tuesday, March 1, the ROC Athletes’ Commission stated that the punishments were a blatant violation of the rights of Russian and Belarusian athletes.

“Yesterday we were informed that today, 1 March 2022, a meeting of the IOC leadership with the Athletes’ Commissions of NOCs [National Olympic Committees] will be held to discuss the recommendations on our participation in international competitions, which were previously adopted and made public by the IOC,” read a statement on the ROC website. The statement continues:

First of all, we consider these recommendations to be ethnic discrimination,” continued the statement. “In this very case it is about Russian and Belarusian athletes.

Unfortunately, this is a clear sign that international sport is transforming into an instrument of political games.

Especially when we consider how step by step the position of the International Olympic Committee has changed towards the suspension of athletes and sports organizations of our two countries.

It is obvious for us that all decisions were made under strong pressure from outside from forces that are far from understanding the principles of integrity of the Olympic movement and non-interference of politics in sport.

Now, some kind of consultations are scheduled, but only after the decisions have been made and even executed. It turns out that the opinion of athletes, our opinion, no longer matters.

The statement added that the ROC athletes would boycott the planned meeting in its current format, saying the discussion would merely turn into an opportunity “for those who call for simply ‘lynching’ Russian athletes.”

“Is this ‘a chance to renounce Russian citizenship’ or an attempt to justify the restrictions and sanctions unjustly imposed on us?” the message questioned.

“Can any foreign colleagues take the courage to explain to young and clean athletes why and on what grounds they are deprived of the opportunity to practice their profession and to make happy sports fans around the world?” denounced the text. “What is their fault? Just because they were born in Russia and/or are citizens of the Russian Federation?”

The statement condemned fellow athletes from abroad who have called for Russian and Belarusian athletes to be banned, also taking aim at claims that some Russian athletes had even supported calls for bans on their own country—something which has been refuted by the ROC in recent days.

“In this situation the ROC Athletes’ Commission calls upon the international sports authorities to refrain from politicization of sport and discriminatory decisions in relation to Russian athletes and to ensure equal rights for all athletes to participate in competitions,” the statement said.

“If violations of the legal rights and interests of Russian athletes continue,” the ROC stated, “we will be ready to provide all possible assistance to any Russian athlete within the existing legal procedures and available legal instruments to observe and implement the principles of legality and justice, and the letter of the Olympic Charter.”

Russia has been hit with a host of sporting sanctions since the launch of Russia’s “special military operation” in Ukraine in the last week of February.

The bans include Russian teams being suspended by the likes of UEFA and FIFA, as well as events such the UEFA Champions League final, Men’s World Volleyball Championship and Junior World Ice Hockey Championship all being removed from the country.