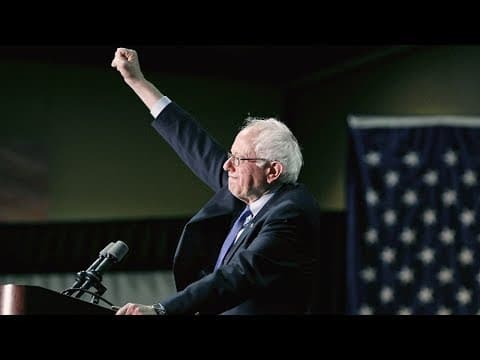 After a “debacle” with the Iowa Democratic Party’s inability to release official results for the state’s first-in-the-nation primary event on Monday night, the campaign of Sen. Bernie Sanders cited the “interest of transparency” by releasing a portion of their internal figures—representing data from nearly 40 percent of precincts in the state—that showed the candidate coming out on top.

“We recognize that this does not replace the full data from the Iowa Democratic Party, but we believe firmly that our supporters worked too hard for too long to have the results of that work delayed,” said Jeff Weaver, senior adviser to the campaign, in a statement released shortly after 12:15am local time in Iowa.

According to the figures, Sanders received just over 28% of the vote during the first alignment of the caucuses in those districts, compared to second-place finisher Pete Buttigieg who ended with slightly under 21% and Sen. Elizabeth Warren who ended up in third with 19%. Presumed frontrunner Joe Biden, meanwhile ended up in fourth place during the first round with nearly 14%.

In the second and final count, according to Sanders’ partial internal numbers, the Vermont senator bested all his rivals by receiving nearly 30%, while Buttigieg was at approximately 25%, and Warren landed with 21%. Biden ended up in fourth place with 12%, just ahead of fifth-place Sen. Amy Klobuchar who landed with 11%.

The data set, said the campaign, was collected by “trained Sanders volunteers at representative precincts from all four congressional districts from a cross section” of both urban and more rural areas in the state.

As The Hill noted, absence of the official results on Monday night left a large vacuum that candidates were left trying to fill:

The Iowa caucuses have traditionally given the winning candidate a critical boost heading into other early-voting states and winnowed the field by culling candidates who underperformed.

But the errors and delays robbed the candidate who will eventually be declared the winner of an opportunity to bask in the warm glow of victory, and reap the financial rewards that a flood of fundraising dollars could have brought to a cash-strapped campaign. And the candidates who might have exited the race after a poor result will instead soldier on to New Hampshire, where the first-in-the-nation primary has never been plagued by such delays.

RELATED CONTENT: Democracy Is in Crisis. Karl Marx Can Help

The Iowa Democratic Party, facing serious scrutiny for its handling of the caucus results, has indicated that official results will not be released until sometime on Tuesday. Despite the lack of official results, Sanders—like all the other candidates—took to the podium to deliver remarks to his supporters late Monday night:

Regardless of final officials numbers yet announced, political columnist for The Week Ryan Cooper argued in an early-morning post that the “debacle” in Iowa should be seen as a boon to Sanders. The caucus, wrote Cooper,

was a disastrous 50-car pileup of technical failures. An app for reporting results apparently developed at great expense by the Iowa Democratic Party completely failed, and party officials didn’t have a sufficient backup plan. One precinct captain was explaining how he had been on hold with the party headquarters for over an hour to CNN’s Wolf Blitzer when they abruptly answered the phone, only to hang up on him when he didn’t answer fast enough. By midnight, less than 2 percent of the results were officially reported.

Nevertheless, it is reasonably clear that Bernie Sanders is now the frontrunner for the 2020 Democratic nomination. Sanders may or may not win Iowa outright, but given that he was ahead in the final polls and that reports from Monday night seemed to confirm his dominant position in many highly populated areas of the state, he will certainly be at or near the top.

If Warren, Buttigieg—and possibly Klobuchar—come out ahead of Biden, warned Cooper, things will look dire for the former vice president.

“If Biden’s numbers start to crater, and Sanders racks up a few state victories, as seems likely, he will very likely to scoop up a plurality of Biden supporters,” opined Cooper.

“Obviously we are still very early in the process, and things could change rapidly,” he concluded. “But for the moment, everything is coming up Bernie.”