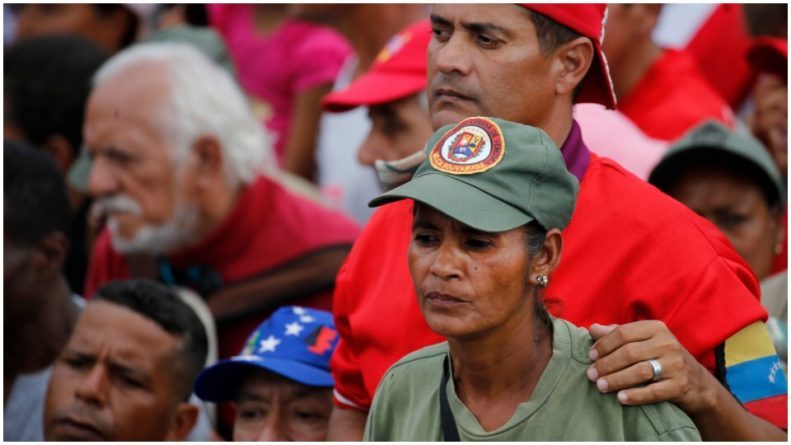 The Trump administration’s open coup in Venezuela continues U.S. efforts, in alliance with Venezuelan oligarchs and extreme right-wing elements among the opposition, to overthrow the United Socialist Party governing coalition that came to power with the election of Hugo Chávez as president in 1998. These include the failed coup attempt against Chávez in 2002.

The current coup emerged into the open on January 23 after months of plotting and repeated threats by Trump to invade militarily. The demonization of the government of President Nicolás Maduro is part of the “softening up” of the American public to support the coup.

Behind lofty calls to free Venezuela from a tyrant lies the real reason for the coup—stealing Venezuela’s natural resources, primarily oil, the world’s largest reserve, and smashing any challenge to U.S. domination of the hemisphere.

The U.S. people face a critical test in defense of democratic rights both domestically and abroad. If the American people and global community don’t resist the Trump coup, and it is not resolved peacefully by the Venezuelan people, the trampling of democracy will continue. It could strengthen Trump and the extreme right and fascist movements by whipping up false patriotism, muting all dissension and criticism. It could sow divisions in the unprecedented anti-extreme right movement which scored a historic victory in November.

If unchecked, the coup attempt can become an uncontrolled conflagration, a full-scale civil war with military intervention by other extreme right-wing governments in the region and even the U.S. Without doubt, this would result in massive death and destruction and a humanitarian crisis. The Trump administration would then be encouraged to carry out regime change and impose dictatorships elsewhere.

Does anyone seriously trust this crew with anything? Take Bolton and Abrams—two war criminals, died in the wool neo-conservatives, and virulent anti-communists. They embrace fascists and advocate unlimited U.S. military power to overthrow any government not to their liking. After all, as Dan Cohen and Max Blumenthal have written, Abrams is “a convicted Iran-Contra felon…notorious for overseeing the U.S. covert policy of arming right-wing death squads and carrying out genocide during the 1980s in Nicaragua, El Salvador, and Guatemala.”

Moreover, in case anyone forgot, Bolton was part of the crew that led us into the criminal Iraq catastrophe under the George W. Bush administration and has been obsessed with overthrowing the Iranian government. In August, Bolton announced the strategic policy that targets Venezuela, Nicaragua, and Cuba as a “Troika of Tyranny,” reminiscent of the “Axis of Evil.”

These countries are seen as chief threats to total U.S. domination of the hemisphere. Meanwhile, the U.S. is building an alliance of extreme right-wing governments including Brazil led by a fascist, Jair Bolsonaro, developing new military bases, and integrating Columbia into NATO.

A fundamental principle of global relations and democracy must be the defense of national sovereignty and non-interference in the internal affairs of another country. Over the past two years, justified outrage has been expressed from practically every quarter over interference in the 2016 U.S. elections by foreign powers, notably Russia, but also Saudi Arabia, Turkey, the United Arab Emirates, Qatar, and Israel.

Trump has waged a relentless assault on democracy through the breaching of democratic norms and open violations of the U.S. Constitution, including the Emoluments Clause, collusion with foreign powers, money laundering and other crimes, attacks on the press, and family separation—all of which have fueled an unprecedented opposition to his rule.

However, suddenly a strange political disconnect has gripped many in our country. Outrage over violations of democratic relations between states is absent when it comes to the coup in Venezuela. Trump has supposedly somehow morphed into a proponent of democracy and human rights. The coup is justified by the GOP (no surprise), the corporate mass media, and many liberal Democrats.

If it’s wrong for others to interfere in our political process, why is it okay for the U.S. to do so to others? Perhaps it is okay when it involves a developing country rich in natural resources, one with a majority of people of color, or one that dares to adopt a path of wealth redistribution, challenge the prerogatives of capital, and seek independence from U.S. corporate domination?

A mass democratic and anti-right-wing people’s movement is fighting for a pro-people domestic agenda that expands democracy here at home. At the same time, a fight must be waged for a democratic foreign policy and a rejection of jingoism and great power chauvinism. A foreign policy that promotes diplomacy and demilitarization. A foreign policy based on working-class solidarity whose foundation is equality, respect for national sovereignty, and non-interference in the internal affairs of other states. A foreign policy that sees cooperation to alleviate poverty, hunger, disease, the migration crisis, and climate change while altering the global allocation of resources.

The U.S. has dominated economic and political developments in the Western Hemisphere for over a century parallel with its rise as an imperialist power. Since 1890, the U.S. has intervened militarily at least 56 times in South America and the Caribbean.

“I spent thirty-three years and four months in active military service as a member of this country’s most agile military force, the Marine Corps. I served in all commissioned ranks from Second Lieutenant to Major-General. And during that period, I spent most of my time being a high-class muscle-man for Big Business, for Wall Street, and for the Bankers. In short, I was a racketeer, a gangster for capitalism.”

The result has been the installation of a series of bloody military dictatorships across the region, the plunder of national resources and labor, and the brutal suppression of national sovereignty and democratic rights.

The U.S. has intervened repeatedly in Venezuela, beginning in 1895, maintaining the country’s subjugation to U.S. corporate interests, especially the domination of Venezuela’s oil reserves. Venezuela’s current crisis is rooted in 500 years of colonialism, reliance on oil as its chief export, and a long legacy of economic underdevelopment. The Chávez government was elected in 1998 after a movement exploded in response to the devastating impact of neoliberal reforms in the 1980s and ’90s.

The new government began to address the vast inequalities that plagued Venezuela and re-allocated a larger share of the national wealth to economic development and expanding education, health care, and social welfare. Collectively, these programs became known as the Bolivarian Revolution.

These policies inspired the election of left-led coalition governments across the hemisphere over the next several years. At the same time, Venezuelan oligarchs, the extreme right, and the U.S. foreign policy establishment and its corporate backers set about reversing the gains, most dramatically with a short-lived coup in 2002 that temporarily overthrew Chávez. A mass uprising of the Venezuelan working class and the poor caused the coup to fall apart, however, and put the president back in office within a couple of days.

Since the death of Chávez in 2013, Venezuela has witnessed political turmoil and polarization. Substantial dissatisfaction exists toward the ruling United Socialist Party and particularly President Maduro, who has been accused of authoritarianism, corruption, and mishandling the economic crisis (which was sparked by a plunge in the global price of oil). The crisis has been deeply aggravated by U.S. sanctions and economic sabotage by Venezuelan oligarchs, resulting in a refugee crisis that has driven three million people from the country.

Nevertheless, Maduro received 67 percent of votes for president in April 2018. Extreme right-wing opposition parties boycotted the elections at the behest of the Trump administration to delegitimize them. Despite the boycott, voter turnout was 46 percent, almost equal to U.S. voter turnout in the 2018 elections.

Since 2014, the most extreme opposition has led violent street demonstrations to create havoc and force Maduro to resign. In 2015, the opposition won a majority in the now disputed National Assembly.

A nobody becomes “president” The rise of Juan Guaidó—the self-declared “interim president” and the Trump administration’s choice to succeed Maduro—would be comical if it weren’t so dangerous. Guaidó was a right-wing street thug drawn into the “regime change factory” orchestrated by the CIA and Venezuelan capitalists. He seems to have been plucked from the crowd to be president because opposition figures and Venezuelan oligarchs couldn’t unite behind any other character.

While Maduro may be unpopular, Guaidó and the extreme-right parties, including Popular Will of which Guaido is a member, are even more unpopular. Before the coup, fewer than 20 percent of Venezuelans had even heard of Guaidó. Many associate these parties with the U.S. and foreign meddling.

“These radical (extreme right-wing) leaders have no more than 20 percent in opinion polls,” wrote Luis Vicente León, Venezuela’s leading pollster. Guaidó’s party remains isolated because the majority of people “does not want war.” Instead, “what they want is a solution.”

Before the coup began, over 86 percent of Venezuelans opposed military intervention, 81 percent opposed U.S. sanctions, and 84 percent wanted a dialogue between the government and the opposition. With numbers this overwhelming, they of course include supporters of the opposition.

Trump has lined up a “coalition of the willing,” including right-wing governments in Latin America, Canada, and the EU, that has recognized Guaidó as president. However, so far efforts to recognize Guaidó have lost in the United Nations. Only 20 of 200 international governments have recognized Guaidó as president. Meanwhile, Mexico and Uruguay are working with the Vatican to initiate a dialogue to solve the crisis peacefully.

The Trump coup in Venezuela should dispel any notion he is a “peace president” or an isolationist. Trump talks from both sides of his mouth. On the one hand, he advocates troop withdrawal from Syria, improved relations with North Korea, the dismantling of global military blocs, and the annulment of unfair trade pacts.

At the same time, his administration is pursuing regime change in Venezuela and Iran, with plans for Cuba and Nicaragua. Trump is building a global alt-right alliance including with dictators and theocratic monarchies. Trump is supporting the bloody Saudi war in Yemen resulting in a massive humanitarian crisis. Trump is building a global coalition against China. Moreover, Trump has abandoned the nuclear arms treaty with Russia and embarking on a $2 trillion nuclear modernization, including expanding the nuclear arms race and building a Space Force.

The battle to block the nefarious Venezuelan coup and Trump’s militaristic and undemocratic foreign policy is a crucial part of the struggle for democracy and to oust Trump and the GOP in 2020.