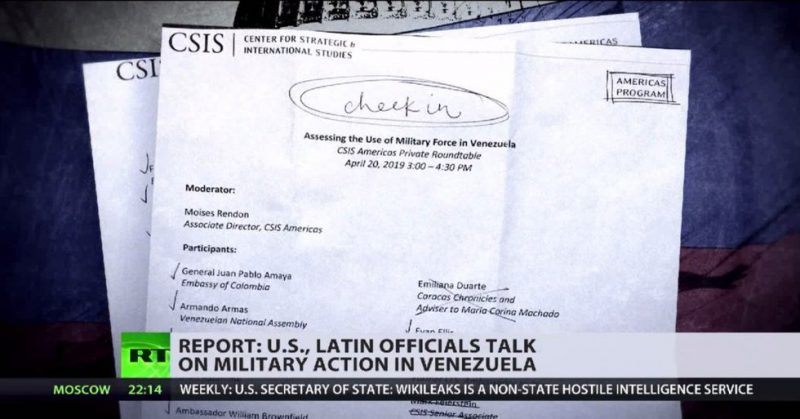 A hawkish US think tank has hosted a secretive meeting on Venezuela, bringing together American and South American officials to discuss the “use of military force” in the country, investigative journalist Max Blumenthal told RT.
The exclusive piece shedding some light on the secretive gathering was published by the Grayzone portal on Saturday. Blumenthal has obtained a check-in list of a private roundtable dubbed ‘Assessing the Use of Military Force in Venezuela,’ which was hosted by the DC-based think tank the Center for Strategic and International Studies (CSIS).

Exclusive: DC’s @CSIS hosted a who’s who of Trump Latin America advisors for a private roundtable to discuss waging a US military assault on Venezuela. The meeting included the former head of SOUTHCOM, a Colombian general and USAID & NIC officials. https://t.co/qVlDZ2WdoT pic.twitter.com/fateSAwR0w

The roundtable was held on April 10, yet its check-list was misleadingly dated as April 20. The fact the meeting had actually taken place was confirmed to Blumenthal by its participants, whom he has reached for comment. They were not very eager to talk, though.

“We talked about military… uh… military options in Venezuela. That was earlier this week though,” research associate at CSIS’s Americas Program Sarah Baumunk said. She promptly grew nervous, adding that she didn’t “feel comfortable answering these questions” and hung up on the journalist.

Another listed attendee, a research associate with international strategy firm Hills & Company, Santiago Herdoiza, simply said it was a “closed meeting” without providing any details.

“They were extremely nervous that somebody in the media knew about the existence of this event. It was a very high-level meeting with basically the main people in Washington involved in making the sausage of Trump’s Venezuela policy and they wanted to keep it as private as possible,” Blumenthal told RT on Sunday. “It really does show that military options are being seriously considered at this point, after all other mechanisms that Trump has put into play seem to have failed.”

The list of participants is surely impressive – the roundtable has brought together former and incumbent military and civil officials from the US and South America, representatives of USAID and Organization of American States (OAS) as well as analysts from various think tanks. Several figureheads ‘appointed’ by the self-proclaimed interim president Juan Guaido were also in attendance.

Arguably the most high-profile participant of the gathering was Admiral Kurt Tidd, who until recently used to head the US Naval Forces Southern Command. Another listed participant – Roger Noriega – is basically Elliott Abrams-lite. Noriega is a veteran US meddler, with his activities dating back to the notorious Iran-Contras affair. He did not get the notoriety of Abrams and quietly held senior positions within the US administration throughout the years, focusing on Venezuela and coordinating the OAS.

Last October, he urged US President Donald Trump to appoint former Ambassador to Venezuela William Brownfield to lead the plans for a military invasion. The latter, also known for his involvement into murky meddling schemes against the country, participated in the roundtable as well.

The meeting was also attended by self-styled officials of Guiado’s “government” – public policy advisor Daniel Sierra and ‘ambassador’ to the US Carlos Vecchio. Participation of said “officials” sounds ironic given their previous efforts to advertise Guaido’s so-called ‘Plan País’ to reconstruct the country’s economy.

When the plan was officially unveiled a month ago, the two have spoken a lot about “reestablishing Venezuela’s democracy,” protecting “individual economic rights and freedoms” and ensuring “citizen security.” Given the topic of the CSIS’s discussion, the figureheads of Guaido’s “government” don’t actually mind to bring this ‘prosperity’ to their homeland through a foreign invasion. It should not be surprising, though, since even the Plan País itself was unveiled at the Atlantic Council – the US and NATO funded think tank.

While the closest supporters of Guaido are pushing for foreign intervention, Blumenthal believes that regional partners of the US are quite reluctant to partake in it.

“Any US invasion of Venezuela would be contingent on the consent from the Colombian and Brazilian governments and its very unclear that they’ll get that consent,” Blumenthal said.

“Both governments are extremely worried about increasing the migration crisis, they are deeply worried about destabilizing the entire region and that’s absolutely what this would entail. And they are also worried about a counterattack from the Venezuela military, which is very competent.”

While talking of the “use of military force” in secrecy, the US continues to tempt Venezuelan citizens and officials with promises of lavish aid – which, of course, would only be possible if the legitimate President Nicolas Maduro is ousted. On Saturday, US Treasury Secretary Steven Mnuchin said Washington will lead the effort to salvage Venezuela’s economy – which it has so far been strangling with sanctions.

“We’re going to be working on trying to put together a consortium of about $10 billion of trade finance that would be available for the new government to spark trade,” Mnuchin said.