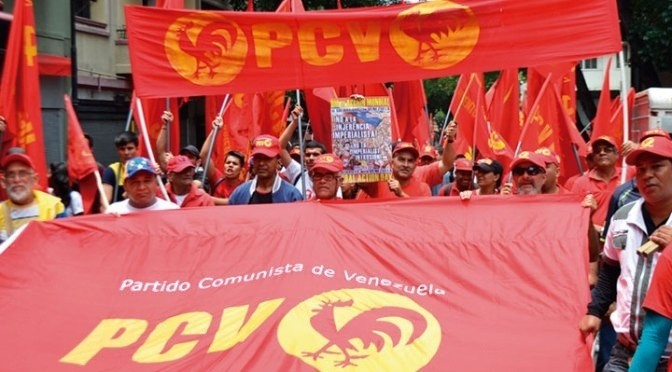 Member of the Political Bureau of the Central Committee of the Communist Party of Venezuela, PCV. General Coordinator, FNLCT (National Front of Struggle of the Working Class)

The class struggle in Venezuela is reaching highly critical levels. The reactionary offensive of the world pro-imperialist right, led by the United States, is advancing to overthrow the legitimate government of President Maduro, destroy the Bolivarian process and impose the dictatorship of big capital, in the context of a strategy to reinforce its global hegemony by shutting the door to the advance of China and Russia in key regions of the globe, including Latin America.

The battle for Venezuela is part of the sharpening of the inter-capitalist and inter-imperialist contradictions, determined by the prolonged and deep crisis of the world capitalist system. It manifests itself in a fierce competition for control of strategic resources, markets, trade routes and geo-strategic positions, in the context of the development of the struggle for a re-division of the world by traditional and emerging powers.

But what is happening in the Bolivarian Republic of Venezuela is not just a tenacious struggle between the powers to dominate their strategic resources. For U.S. imperialism it is necessary not only to overthrow the government, but much more than that, to destroy all vestiges of Bolivarianism in Venezuela and its influence in the south of the continent, and more precisely, its influence in the anti-imperialist and anti-neoliberal struggles of the peoples of the region and of other latitudes.

From the beginning of the government of President Chávez and of the constituent process he led in 1999, North American imperialism saw Bolivarianism as a threat to its interests in the region (Santa Fe IV document). The specter of Bolivarianism, after almost two centuries, emerged from Caracas with renewed strength and broad popular support, promoting Latin American and Caribbean unity without Yankee tutelage, defeating the ALCA (Area de Libre Comercio de las Americas, Free Trade Area of the Americas FTAA) and forming UNASUR (Union of South American Nations), the Bolivarian Peoples’ Alternative (ALBA) and other sovereign instruments of integration.

In addition, with the electoral triumph of progressive governments, triumphs that were conditional as far as the US was concerned, ample space was opened to increase commercial, financial, military, communication and political relations with Russia, China, Iran, among others, tending to displace the traditional sole dominion in the region of the North American power and its neoliberal policies, which were conceived to maximize profits of finance capital and big United States and European monopolies, with the superexploitation of the working class and the subjugation of our peoples. The Monroe Doctrine (America for the North Americans) was being defeated for the first time in history.

These are reasons that lead U.S. imperialism to “obsess”, not only by re-establishing a solid correlation of forces favorable to its exclusive dominance in our subcontinent, overthrowing every progressive government in Latin America, but also to try to reverse and radically dismantle the Bolivarian process, which, even with its limitations and weaknesses, has an ideological-political and socio-cultural weight that pervades Latin American, national-patriotic, anti-neocolonial and even anti-imperialist ideas and feelings which have deep historical roots in our peoples. The tactics employed by the United States in its current offensive against Venezuela correspond to these objectives. The electoral path would not serve such purposes, except to confer “legitimacy” on terribly violent processes in the struggle for power and to criticize current and future popular resistance. Obviously, this purpose is served by the concept of unconventional warfare, drawn up by imperialist strategic intelligence and operationally developed by the U.S. Southern Command.

For the Communist Party of Venezuela (PCV) all that is clear, as well as the unquestionable fact that Venezuela has not ceased to be a dependent capitalist economy, with a model of accumulation based fundamentally on rentismo-extractivismo [1] , with precarious productive forces and with an essentially bourgeois state — despite the progressive reforms of the Chávez period — which corresponds to its economic base and to the public management conception of oil rentismo. That is to say, the war of imperialism and its henchmen against Venezuela is not to put an end to “socialism”, because in reality this does not exist in our country, at least as we Marxist-Leninists conceive it.

Since 2011, the PCV has characterized the so-called Bolivarian Revolution as part of the long historical process of struggles of the Venezuelan people for national liberation, which since 1999 has been expressed in a government that has advanced progressive, anti-neo-liberal-oriented reforms aimed at strengthening national sovereignty, redistributing oil revenues towards the most downtrodden popular sectors and promoting Latin American and Caribbean unity without subordination to U.S. imperialism. But that the alliance of classes that sustains the Bolivarian process has the predominance of non-monopoly bourgeois sectors and layers of the petty-bourgeoisie, so that the possibilities of effectively advancing toward a liberating national revolution and opening certain perspectives toward the construction of socialism, depends on achieving a correlation of forces favorable to the working class, the peasantry and the whole of the revolutionary popular movement.

Such a characterization has led us to raise the need for a sustained, united, gathering-up of workers, peasants, communal and popular forces in struggle to defeat the aspirations of Yankee-European imperialism, confronting the monopoly bourgeoisie, the landholders and the corrupt mafias, also separating from the tendencies of submissive reformism, which have gained ground fundamentally after the death of President Chávez, and which, far from raising the question of the dismantling of the domination of capital, favor the preservation of dependent and rentier capitalism.

Repeatedly, we communists have raised the need to give a revolutionary solution to the crisis, with the application of a government program that attacks the structural causes of the crisis, with measures such as: worker and popular control over the production and distribution of goods and services; revolutionary nationalization of the banking system; nationalization of foreign trade; imprisonment and confiscation of goods from the corrupt, speculators, hoarders and smugglers; recovery and re-launching of state enterprises with a new model of collective and shared management; large-scale agricultural and industrial productive development; liquidation of the latifundia and expropriation of the landholders, guaranteeing land and technical-logistic support to the true peasants.

The priority task of the moment is to defeat the escalation of multiple aggressions of imperialism, but in order to turn this great patriotic and popular battle into the activation of a profound revolutionary process of a socialist character, we must set ourselves the objective of power for the working class and the working people of the city and the countryside. We Venezuelan communists call for the rebellion of the peoples against capital.

[1] Editors’ note: this term is used in politics to designate a state of affairs in which a country’s income one-sidedly derives from non-productive economic activities, generally the extraction of oil, neglecting the development of other, productive sectors of the economy that could guarantee sustainable, balanced development]