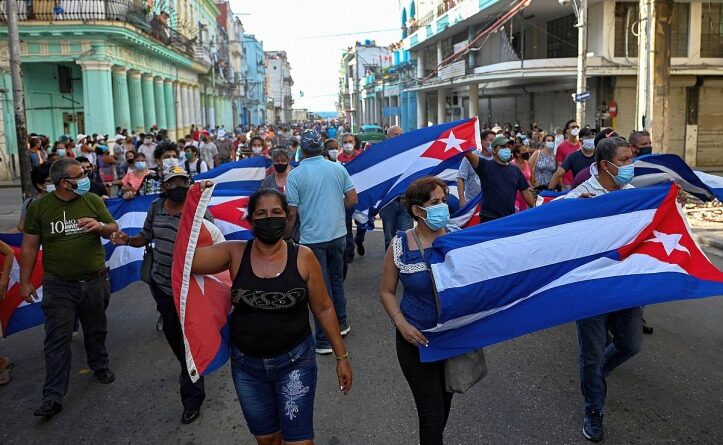 By his own account, Frank García Hernández, a communist historian at the University of Havana, was not arrested for criticising the Cuban government or for participation in the July 11 mobilisations against it.

This is verified in the Comunistas statement. Garcia is the founding editor of Comunistas and evidently the author of much of the statement which details his arrest and what he saw of the actions on July 11,

“[a] police officer accused Frank of carrying out violent acts and being on the side of the protesters. Later, the authorities verified the falsehood of this accusation.”

García was released the very next day. Evidently his arrest was for “violent acts” not “criticism”. If criticising government was a crime in Cuba, then García should at least have been charged before his release – he wasn’t. The authorities would only need to download some of the material freely available on the Comunistas website.

However, neither the facts surrounding García’s arrest, not his prompt release prevented an international network of other “critics” of the Cuban government – most of who describe themselves as socialists – from immediately launching a hostile public campaign attacking the Cuban leadership.

The attack took the form of an open letter petition initiated by Emeritus Professor Alex Callinicos of Kings University in London. Early signatories and promoters include Gilbert Achcar, Charlie Post and Ashley Smith. The letter singled out the arrests of García, Maykel González Vivero (who was arrested and released together with García under the same accusation of violence) and two students at the University of Havana. It gave no details of the students’ arrest but mentions that they identify as socialists.

The fact that these four arrests took place was presented to a wide international audience as evidence that the Cuban government is engaging the round up and arrest of critical communist opponents and that the supposed round up must be opposed. For example, the Left Voice website states, “The government of Miguel Díaz-Canel is attacking critical communists whose aim is to defend the gains of the Cuban Revolution.”

Absurdly, the petition was launched after Frank García and Maykel González had already been released! This is acknowledged in the petition itself which reads, “we have heard of unconfirmed reports that Frank García Hernández was released…”. But once they had seen a way to land some blows on Cuba, clearly the petitioners did not want to let García’s freedom get in the way. The whole sordid episode of the petition is ably documented here.

THE ‘LEFT’ WING OF THE ANTI-CUBA CAMPAIGN
The petition campaign appeared as one part of broader campaign surrounding the July 11 protests carried out by people who self-describe as socialists and anti-imperialists of various stripes, but repeat and amplify the anti-Cuba propaganda in the capitalist media. The main example is the claim that Cuba violently repressed “peaceful protests”. In Callinicos’ version, for example, “the 11 July protests were mainly motivated by legitimate grievances and met with unjustifiable repression” [Facebook, July 28].

Another frequent falsehood is that the opposition protests were large or even “mass” actions.  Usually this is coupled with ignoring the far larger pro-government mobilisations the following weekend. But strangely in our information age, neither the capitalist media, nor the brigades of anti-Communist Cubans in Miami and elsewhere, were able to document any “large” or “mass” protests with photographs or videos that show their size.

RELATED CONTENT: Cuba’s Central Bank Regulates the use of Cryptocurrencies

Similarly, it is also inconceivable that, if the protests were violently repressed as is claimed, that no photo or footage showing this has emerged either. One can scroll through the #SOSCuba material (which is devoted to discrediting the Cuban revolution) and scroll thousands of posts and reposts of photos, videos and memes and claims and still find nothing. What evidence of repression can we find there? Any broken bones? Much blood? People getting hit or kicked by police? Shot? No. The reason no images of such brutality has been shoved down our throats via the big mass media is because it did not occur.

It’s amazing actually, considering the resources that have gone into the discrediting effort that they have almost completely failed to gather any good propaganda of this type. Considering the tense and difficult situation of high stakes protests and counter protests, we might have expected Cuba’s opponents would at least come up with one or two examples of some terrible act. They seem to have failed entirely.

Instead, the Miami propagandists are forced to use things like photos of oppositionists with contorted faces yelling while being arrested by extremely calm police. They are forced to imply that such people are being marched off to their death or torture. Pictures of police simply walking in a group, or pro-government civilian mobilisations with no oppositionist in the camera shot at all are also used to infer or assert sinister outcomes.

Of course the government was forced to make some arrests. This was inevitable and justified, because, as Frank Garcia tells us,

Let’s not forget Garcia is a critic of the government, so his account can hardly be accused of pro-government bias. He adds,

“in the Calzada de 10 de Octubre [street], Havana, there were serious violent events, where two police cars were overturned.” […]

“videos of serious vandalism have been released, such as the stoning of a children’s hospital.”

But there is no need to trust Frank Garcia’s account. As he says, there is actually video evidence of the opposition outrages. This video from Cuban state television is in Spanish but the footage in the first few minutes shows clearly what the government was up against.

In that context of course the revolutionary forces had to fight back. Of course, the police and revolutionary civilian groups had to suppress the violent and destructive opposition actions. What was the alternative? Allow the stone throwers to attack not only the Children’s hospital but other buildings too? Allow alienated people to loot with impunity? Permit free reign until someone has the idea to start burning buildings?

There is zero evidence of any pattern of widespread or excessive violence. Quite the opposite. Frank Garcia’s report suggests this too,

“During the first hour of the protest [in Havana], the police arrests were isolated, allowing, at least tacitly, the protesters to march” […]

”The initial protest located at the Máximo Gómez Park demobilised after the area was ‘peacefully’ occupied by pro-government forces (civilian and uniformed). The opposition protest then reformed and marched through important parts of Havana.”

From Cuba: a description of the protests

In other words, according to Garcia’s report there was a pro-government counter-mobilisation in Máximo Gómez that caused the opposition mobilisation to disperse.

Not a word there in Garcia’s chronological account about the “violence”. One wonders what exactly Professor Callinicos means by “unjustifiable repression”? Or is he just throwing words around?

It would be possible to keep picking apart the “arguments” by Callinicos, Professor Post and their friends, but for the most part their attacks are weak and with little connection to what is happening on the island. It is more fruitful to ask why are self-described socialists so insistent on attacking a small, socialist country that is under siege from the largest imperialist power in the world? That question is addressed in article two of this series.

CALLINICOS, THE PROUD BOYS AND MAYOR SUAREZ
The petition campaign coincides with a concerted attack by the US far right and republicans who also stepped up their attacks on Cuba which are made on the same basis – against the supposed repression of the Cuban “regime”. Immediately following the July 11 protests in Cuba, a series of far-right demonstrations were held in Miami, Florida and other US cities, for this purpose. In Miami the largest demonstration was bigger than any that took place in Cuba.

Fox News’ Sean Hannity, Republican Mayor Francis Suarez, Republican Governor Ron DeSantis and The Proud Boys far right militia group were literally leading this campaign on the ground as masses of far-right Cubans – many holding Trump 2020 flags – mobilised behind the demand for Biden to take a harder line (which he has done). Suarez publicly called for US military action against Cuba. These calls for greater imperialist intervention were echoed all over the country including by Mike Pompeo and several Republican presidential hopefuls. The campaign was successful in pushing Biden to tighten the already suffocating, deadly US economic blockade (which the petitioners claim to oppose).

In that political moment, what possible mindset or world view could motivate socialists, especially socialists located in the US and allied imperialist states, to join in with the frenzied attack on Cuba as “repressive”? While Hannity, Suarez, Pompeo and The Proud Boys speak to their respective audiences, Professors Callinicos and Post speak to a different audience – but carry a similar message: Cuba is repressive, Cuba tramples on freedom, the Cuban power is not legitimate. All parts of this harmony work to soften up the public for continuing the blockade and perhaps worse to come – which is why we need to call it out.