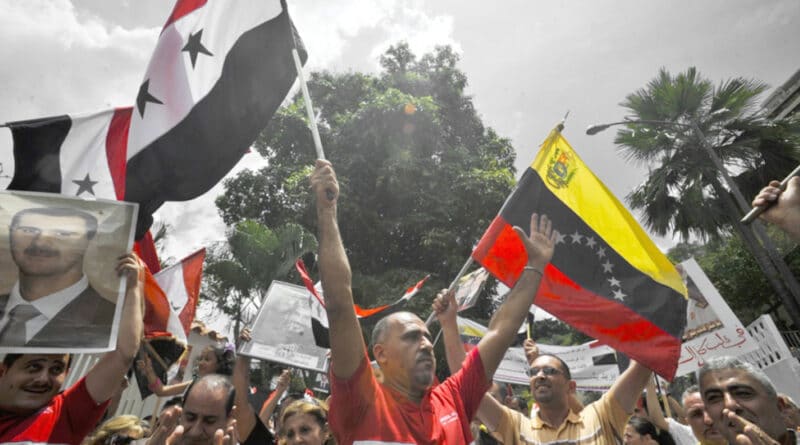 Syria and Venezuela have called for closer bilateral coordination and broader ties with other politically-aligned countries on the world stage with the goal of confronting the Western sanctions designed to pile up economic pressure on the two nations.

In a telephone conversation on Friday morning, Venezuelan Foreign Minister Jorge Arreaza and his Syrian counterpart, Faisal al-Miqdad, discussed ways to deepen bilateral relations and hailed the two nations’ mutual support for one another in the face of Western hostilities, the Caracas-based Telesur TV network reported.

The two top diplomats emphasized the need for Damascus and Caracas to promote their ties with international institutions in coordination with the politically-aligned states so that they can mobilize all their resources to stand up to the West’s pressure policies against independent states.

“The people and government of Venezuela back Syria’s fight against terrorism as well as the resistance (campaign) underway in this country against the hostile plots being hatched by Washington and other Western powers,” Arreaza said.

He further voiced Venezuela’s “unchangeable” solidarity with the Syrian nation in its efforts to rebuild the conflict-torn country through reliance on its own domestic capabilities.

In turn, Miqdad praised the Venezuelan nation’s power to withstand foreign conspiracies, especially those of the United States.

Syria, he said, stands by the Venezuelan people and leadership in their efforts to counter the acts of aggression and the cruel sanctions targeting the Latin American country.

In a post on his twitter page following the talks, the Syrian minister said the two sides also exchanged other issues such as the excessive demands of imperial powers as well as the need to strengthen multilateralism within the framework of the newly-formed Group of Friends in Defense of the Charter of the United Nations.

The 17-nation coalition was established in March 2021 by UN member states including Iran, Russia, China, Syria, and Venezuela, among other countries subjected to Western sanctions.

The goal of the alliance is to support of the United Nations’ founding treaty, seek to promote multilateralism and diplomacy over the use of force against violations of other member states of the world body.

In parallel with the militancy underway in Syria since March 2011, the Arab country has been the target of several sets of sanctions by the US and its European allies, who have been lending support to various militant groups in their campaign to overthrow an elected government in Damascus that refused to submit to the Western will.

The US and its allies have further tightened their unilateral restrictive measures against the Syrian nation over the past few years, after the militants let their foreign sponsors down and began to take stinging blows on the battlefield from the national Syrian army and its allied forces.

Similar to the Syria case, the Venezuelan nation has also been the victim of harsh American and European sanctions for choosing to protect its sovereignty and independence from the West’s domineering policies.

The United States and its European allies have made several failed attempts to bring down the government in Caracas, the latest of which was a coup d’état led by Juan Guaido, a Washington-backed opposition figure who abruptly declared himself “president” and tried in vain to make the armed forces turn their back on elected President Nicolas Maduro.

Featured image: The file photo shows Venezuelans demonstrating in support of the Syrian nation in front of the Syrian Embassy in Caracas in April 2011, weeks after the outbreak of a foreign-backed crisis in the Arab country. (By AFP)