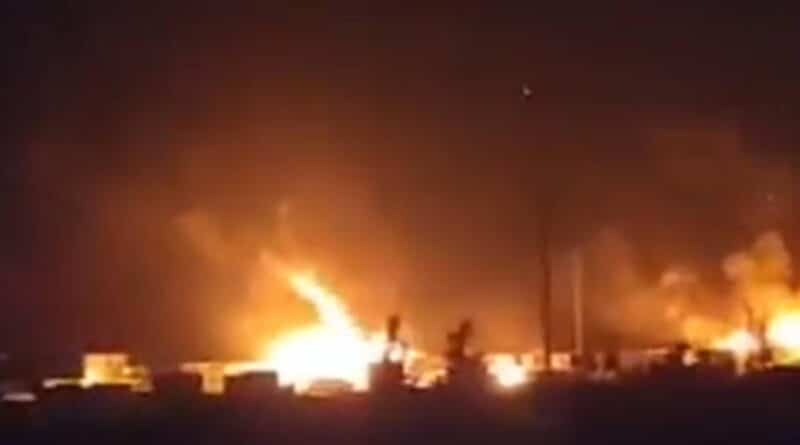 Syrian air defences were activated after the country’s principal port city of Latakia came under missile attack, sparking a major fire and resulting in significant damage to the port, Syria’s state media reported.

The attack took place at 3:21am local time (01:21 GMT) on Tuesday, with rockets being launched from the “depth of the Mediterranean”, the SANA news agency reported.

Footage posted online shows a series of blasts rocking what appears to be the port.

In another clip of the scene, flames can be seen engulfing Latakia and lighting up the night sky.

The port sustained great material damage as a result of the strike, and “a number of containers” were burned to the ground, SANA reported. There have been no reports of casualties.

The airstrike comes exactly three weeks after the port was subject to a similar attack, for which Damascus also blamed Tel Aviv. At that time, several missiles hit the port in an overnight raid, igniting a fire in the container area.

The Latakia Governorate is also home to a major Russian military facility, the Khmeimim Airbase, located some 25 kilometers (15.5 miles) southeast of the provincial capital.

The missile attack comes as tensions between Damascus and Tel Aviv run high. Earlier on Monday, the Syrian government had accused Israel of “unprecedented escalation” after the latter gave the green light to a plan for a $317 million settlement in the Israeli-occupied Golan Heights that will see the number of Jewish settlers double over the next five years. Damascus condemned the expansion as a “blatant violation” of international law. The Golan Heights is part of Syria’s sovereign territory, also recognized under a UN Security Council resolution.

Featured image: A fire after an alleged Israeli attack on the port of Latakia, Syria, December 28, 2021. Photo: Twitter / @no_itsmyturn / screenshot