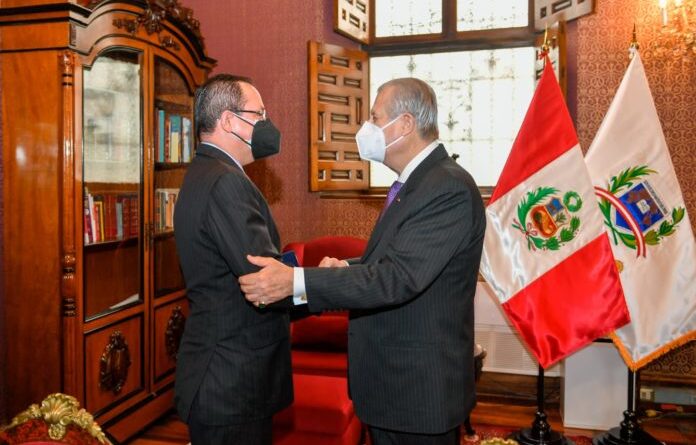 A new phase in bilateral political and diplomatic relations began yesterday between the governments of the Republic of Peru and the Bolivarian Republic of Venezuela with the official appointment of their respective ambassadors, turning the page on the hostility expressed by the so-called Lima Group.

With this step, both nations put an end to four years of rupture initiated by Peru’s then-President Pedro Pablo Kuczynski in 2017, when the South American nation joined attacks on the constitutional government and people of Venezuela led by the US and Canada.

This week, Peruvian authorities of the Castillo administration received the credentials of the new Ambassador of Venezuela to Peru, Alexander Yánez Deleuze. The diplomat was received by the Peruvian Foreign Affairs Minister, Oscar Maurtúa de Romaña.

Similarly, last October the Ministry of Foreign Relations of the Bolivarian Republic of Venezuela announced its official recognition of Richard Freddy Rojas García, appointed by Pedro Castillo as Lima’s ambassador to Caracas.

Fall of the Lima Group
Since its creation in 2017 with the aim of promoting far-right extremist groups and overthrowing the Venezuelan president, Nicolás Maduro, the so-called Lima Group has been troubled by internal conflicts and departures. This week’s events mark its end, for all intents and purposes.

The greatest blow received by this instrument of political conspiracy was the victory of the left in Peru, where Pedro Castillo took office on July 28, despite attempts by the Peruvian elite to derail the people’s will at the polls.

Venezuela and Peru have now turned the page on this phase of aggression, thus opening up opportunities for economic, cultural, and political cooperation. Ambassador Alexander Yánez assumes the responsibility for fostering this relationship. The Venezuelan diplomat was also ambassador to Bolivia before the government of Luis Arce, and had previously held a diplomatic post in Peru. In addition, he worked as Venezuela’s Vice Foreign Minister for Latin America and the Caribbean.