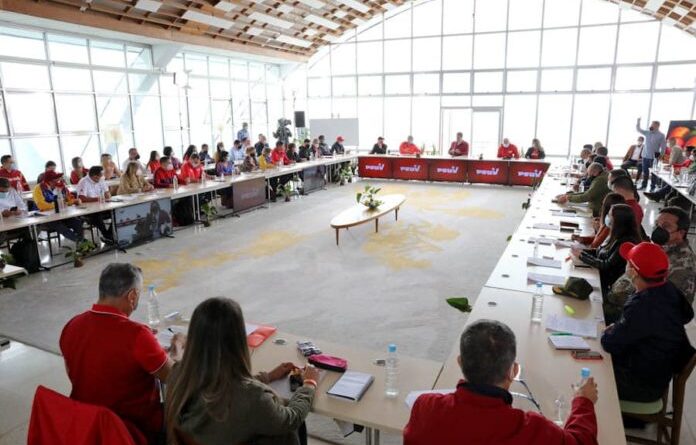 The United Socialist Party of Venezuela (PSUV) will hold primary elections on August 8, selecting candidates to contest the for the offices of governors, mayors, regional councils, and councils throughout the country.

The announcement was made this Tuesday, June 1, by the head of state and president of the party, Nicolás Maduro Moros, during a meeting with the national leadership and the youth of the revolutionary political party. The meeting took place at the emblematic Hotel Humboldt in the city of Caracas.

Maduro explained that the origin of the entire process is rooted in the method approved by the PSUV, in the Hugo Chávez Units of Battle (UBCH), as the fundamental nucleus of the party in each electoral center.

“We have decided to present the most inclusive, democratic, transparent, and participatory method, so that the rank and file of leaders, militants and the youth apply and then, together with the people, elect all our candidates,” he said.

In this way, President Maduro confirmed that the PSUV has already fully defined its approach to the selection of candidates for the positions to be contested in November.

Next steps to follow
After reporting that the PSUV has already approved the procedure and regulations outlined for the selection of candidates, President Nicolás Maduro said that on Friday, June 4, the process of identification, registration, and updating of data of all PSUV members began in the country.

He stressed that there are thousands of candidates who, within the framework of the Constitution, will participate freely to run for the positions of governors, mayors, legislators and councilors.

He also recalled that the PSUV currently has a registry of 7,790,878 members. In addition, he highlighted the organization of 14,381 Bolívar-Chávez Battle Units (UBCH), with 294,809 community leaders in 47,827 communities.

“We have decided to take the first step for the democratic, direct and secret nomination of all the candidates to contest the positions for the popular election,” said Maduro. “To turn the UBCH into the epicenter of the initiative towards a democratic method of participation and selection.”

RELATED CONTENT: Anti-Chavista Stalin González on 21N Regional Elections: ‘An Opportunity to Get Closer to the People’

For this reason, he announced that on Sunday June 27, in compliance with the steps of the regulation, and in line with the commitment to a democracy run “from the bottom up,” the UBCH will be constituted as a base assembly. It will receive and nominate all the candidates who will go on to the primary elections, leading up to the mega-election on November 21.

Thorough method
For his part, PSUV Vice President Diosdado Cabello explained that applications will be made directly and secretly. This way they will define who will select each of the six positions to be contested: governors, mayors, legislators by list vote, councilors by list vote, nominal legislators, and nominal councilors.

“The objective is that there is a maximum leeway for applications,” added Cabello. “Then the list of nominees, both men and women, with an assigned number on the list, will be presented in alphabetical order.”

In this manner, everyone present at the UBCH assembly will nominate a person using the assigned number. This procedure applies to all steps of the election.

The list obtained will be sent to a computer center, to verify the proper authorization of officials selected. According to the support obtained in this vote the PSUV will determined its candidates for the primary elections on August 8.