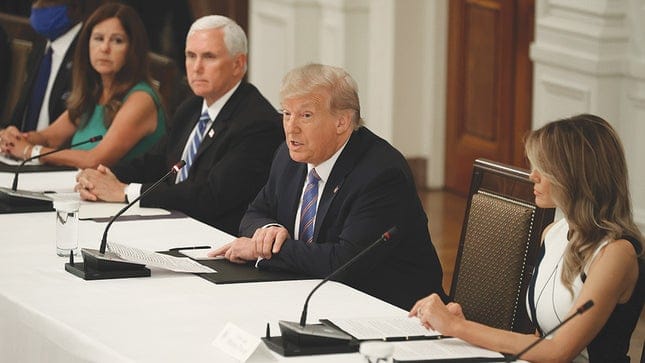 The president of the nation’s largest teachers’ union hit back at President Trump over his demand that schools resume in-person classes this fall, saying reopening cannot take place without guaranteeing the safety of students and staff.

The president of the nation’s largest teachers’ union hit back at President Trump over his demand that schools resume in-person classes this fall, saying reopening cannot take place without guaranteeing the safety of students and staff.

“Did you hear the word he didn’t use? ‘Safely,’” National Education Association (NEA) President Lily Eskelsen Garcia said Wednesday in reference to Trump’s event the previous day on reopening schools.

“There’s no one that wants our kids back more than teachers … but we want to open it safely,” she said on CNN’s “New Day.”

“We see what happens when they let bars open prematurely,” she added, noting spikes in coronavirus community spread in states that were quick to reopen. “This isn’t a bar. We’re talking about second graders. I had 39 sixth graders one year in my class. I double dog dare Donald Trump to sit in a class of 39 sixth graders and breathe that air without any preparation for how we’re going to bring our kids back safely.”

The NEA has said any return to in-person classes must be accompanied by districts receiving personal protective equipment, deep-cleaning procedures that meet Centers for Disease Control and Prevention standards, classroom layouts that accommodate six feet of distancing and hand-washing and sanitizing stations installed.

Asked how the cost of those upgrades would be covered, Garcia said Congress had already readily “[thrown] money at businesses so that they wouldn’t have to lay people off,” but noted that Trump has called the HEROES Act, which would pump money into schools for virus preparation, “dead on arrival.”

RELATED CONTENT: World can Show how Pharma Monopolies Aren’t the Only way to Fight COVID-19

House Democrats passed the $3 trillion HEROES Act in May. The measure has not been taken up in the GOP-controlled Senate.

Trump on Wednesday morning threatened to cut funding to schools that fail to reopen, claiming without evidence that reluctance to open was an attempt to sabotage him politically.