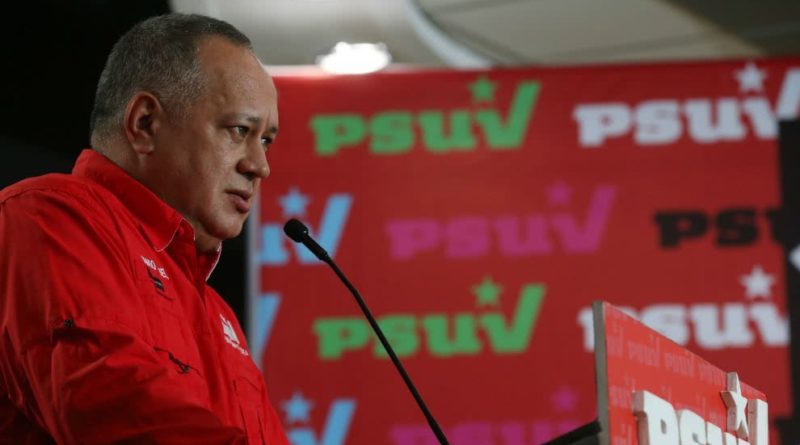 The president of the National Constituent Assembly of Venezuela (ANC) and vice president of the United Socialist Party of Venezuela (PSUV), Diosdado Cabello, has confirmed that he tested positive for Covid-19. This was reported in a message written through the social network Twitter. President Maduro confirmed that the governor of the Zulia state, Omar Prieto, also tested positive for Covid-19.

“Dear compas, I am complying to report that, after having undergone the corresponding tests, I was diagnosed positive for Covid-19. I am already isolated, fulfilling the indicated treatment. Thank you for your good wishes, with high morale. We Will Win!!” Cabello wrote.

RELATED CONTENT: Brazil’s Bolsonaro to be Sued by Journalists for Exposing Them to Covid-19 (Video)

Half an hour later, more than 3,000 comments had been left by his supporters recommending a speedy recovery, and the hashtag #VenezuelaConDiosdado ranked second on the list of Twitter trending topics in Venezuela, only behind “Diosdado Cabello”. But it also was a trending topic (in at least position 22) in the United States, as tweeted by Orinoco Tribune.

Diosdado Cabello trending topic #24 in the US after announcing he is positive for Covid-19 pic.twitter.com/fgiJEmF0Nn

Venezuelan President Nicolás Maduro read the tweet while participating in a televised event at the end of the school year. “I saw that comrade Diosdado Cabello has just posted a message on his Twitter account, reporting that, after doing the PCR tests or molecular test for Covid-19, he was diagnosed positive. All the solidarity of my family. Here we are, Cilia and I, we are with you Diosdado. All the solidarity of the people of Venezuela! In the hands of José Gregorio Hernández!”


Maduro said he was sure that “with your moral and spiritual strength and the protection of our saint, José Gregorio Hernández, you will get through these days of treatment and recovery.” Maduro indicated that Cabello is already in treatment and resting. “He’s fine. He had had what he believed to be a strong allergy, with a bit of a headache. I told him to take the tests and he did it quickly.”

“To face this spell and overcome it. All the solidarity and positivity of our prayers and spirit with Diosdado! Venezuela with Diosdado!”

The day before, the vice president of the PSUV announced that he would not conduct his TV show “Con el Mazo Dando” as is usual on Wednesday nights, due to what was initially presumed to be a strong allergy.

Governor of Zulia also infected
Later, President Maduro also confirmed that the governor of the Zulia state, Omar Prieto, also tested positive for Covid-19. “He presented some discomfort. I told him immediately, since he does not stop, he is on the street all the time, I told him: “stop for a moment and let’s do the test for you”. We did the tests and it was positive for coronavirus. He is a warrior, a man of the street! He doesn’t stop. In the communities, protecting the people of Zulia who have had this strong outbreak.

He indicated that Prieto is already in treatment and in total rest, coordinating his work by telephone.

Featured image: Diosdado Cabello, one of the most charismatic and trusted leader of the Bolivarian Revolution. File photo.