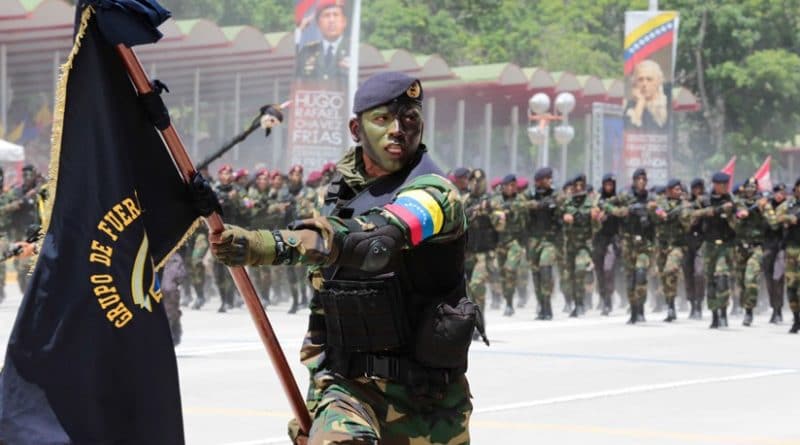 This week the Los Rastrojos narco-paramilitary gang failed in its intended attack on the Venezuelan army as it was passing through an area of ​​Catatumbo, a border municipality in Zulia state.

As journalist Madelein García recounts, the paramilitary cell attacked a column of vehicles of the Venezuelan army as it passed over a bridge connecting Caño de Medio with Caño Motilona, two sectors of the aforementioned municipality. The combat lasted an hour and four members of Los Rastrojos were killed, the journalist said.

The area where the clash between the Venezuelan military and the irregular forces occurred is part of the trails that connect Venezuela with Colombia, controlled by Los Rastrojos for fuel smuggling and human trafficking.

Regarding the latter, President Nicolás Maduro has been reiterative in warning about the threat posed by, in the midst of the Covid-19 pandemic, Venezuelans entering the country illegally without going through the proper epidemiological controls that the state has ordered conducted at the borders.

Probably the event on Wednesday is connected with the coup against Los Rastrojos on June 14, three days before, when the 12th Army Caribbean Brigade, which was on a patrol operation, dismantled a camp of said  paramilitary band on the same site after a confrontation with its members.

At that time, the military command in Zulia state reported the seizure of military material such as explosives, antipersonnel mines, AK-47 rifle chargers and grenades.

Since the Venezuelan government ordered compulsory social quarantine throughout the country, other events related to the irregular group have occurred in Venezuelan states that border Colombia, while health, police and military personnel have been deployed at the Comprehensive Social Assistance Points (PASI ) to take care of Venezuelan migrants and detect cases of Covid-19, in order to avoid a further increase in the number of cases  imported from the neighboring country, which already exceed 1,500.

Bernal denounced Buitrago as “having an extensive record for smuggling gasoline, drug trafficking, and extortion.” In Colombian media he is identified as the ultimate leader of the gang in Norte de Santander, Colombia.

On May 20, Moisés David Contreras Santana, a lieutenant of the paramilitary group in Coloncito, Táchira, was arrested and weapons and equipment for military use were seized.

Ten days later, Bernal reported that three other paramilitary members of Los Rastrojos had been captured, during an operation to combat the mafias that are smuggling people via illegal trails (trochas) from Colombia to Venezuela.

2020: data on narco-paramilitary violence in Colombia

In recent weeks, clashes between irregular gangs have occurred in the Colombian region that borders Venezuela.

W Radio, citing the inhabitants of the town of Banco de Arena, rural area of ​​Cúcuta, reported on June 2 that there were several detonations and rifle shots, accusing Los Rastrojos and the Colombian guerrilla group ELN as the authors of the event.

The Colombian attorney general, Fernando Carrillo Flórez, denounced an increase in the forced recruitment of minors, pointing not only to guerrilla movements, but also to criminal structures linked to drug trafficking, kidnappings and homicides, acts that continue to be carried out in parallel to the Covid-19 emergency currently affecting the country, forcing the displacement of communities away from the territories in conflict, although that movement involves the risk of being infected with Covid-19.

Among the armed groups that the head of the Public Ministry listed are Los Rastrojos, the Urabeños and the Aguilas Negras, all with open files in the unconventional war against Venezuela.

Despite the fact that the Peace Accords have been signed for four years, the Office of the Attorney General indicated that in 30% of Colombian territory, especially in rural areas, children and adolescents continue to be affected by the disputes triggered by paramilitarism and drug trafficking.

Similarly, the UN Refugee Agency (UNHCR), cited by El Espectador , revealed the worrying figures regarding the 43 mass displacements detected in Colombia so far in 2020. Due to the clashes between illegal armed groups, 11,800 people had to flee their homes, while another 1,000 more did so due to threats.

The threat of Los Rastrojos on this side of the border

The FANB has had to keep itself on permanent military exercises in this period of pandemic, even more so after the failed terrorist incursion called Operation Gideon.

The low intensity war of paramilitaries against the Venezuelan state does not ease despite the global health emergency.

In this sense, and as the Venezuelan president himself has denounced, it should not be ruled out that the transfer of Venezuelans by gangs is a deliberate action by paramilitary groups, in alliance with the Colombian extreme right, to damage the effective control of the pandemic that exists in Venezuela.

A recent action that could be triggering the latest confrontations with Los Rastrojos is the new gasoline distribution plan in the country, which, by cutting the waste on the input subsidy, would be affecting the interests of the mafias that smuggle gasoline between Venezuela and Colombia.

The relationship of this criminal gang with the leaders of anti-Chavismo who are leading the coup against Venezuela is obvious.

The images of Guaidó being escorted by Jhon Jairo Durán Contreras, alias “Menor”, ​​and Albeiro Lobo Quintero, alias “Brother”, who toured the world in 2019, became, that year, the main evidence in a series of investigations compiled by the Venezuelan government where it is shown that, beyond criminal activities, narco-paramilitary cells have been incorporated into the destabilization scheme against Venezuela that the Casa de Nariño (Colombian government) itself promotes.