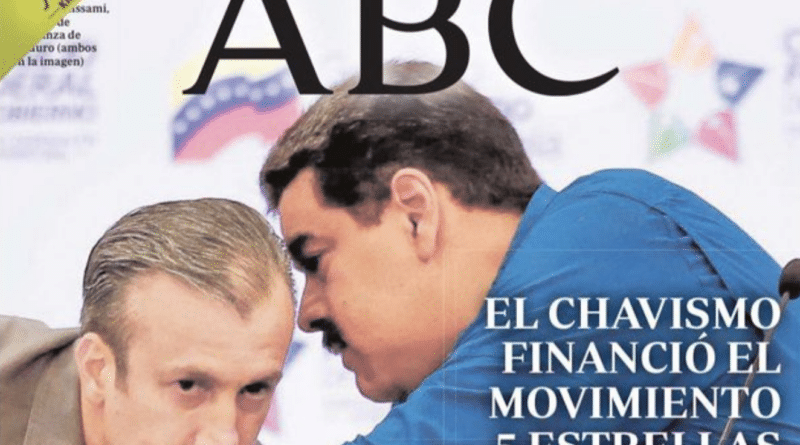 The Spanish newspaper ABC published on June 15 a piece, signed by the Spanish journalist Marcos García Rey, stating that the Venezuelan government financed the Five Star Movement (M5S, for its acronym in Italian) by sending a briefcase with 3.5 million euros to the Venezuelan consulate in Milan in 2010.

They say that such action would have been led by the current president of Venezuela, Nicolás Maduro, being then Minister of Foreign Relations to President Hugo Chávez. The media cites an alleged document from Venezuelan intelligence.

The money would have been directed to Gianroberto Casaleggio, who died in 2016, to secretly finance the movement founded in 2009 by comedian Beppe Grillo .

What is special about the M5S?

The M5S is part of a political sector adversely affected by the European far right because of the rise it has achieved in a short term.

Founded 10 years ago by Grillo and the late communication businessman Gianroberto Casaleggio, the M5S is a party that emerged with an anti-establishment profile. Its career explains the climate of political decomposition and satiety that runs through Italy, the third economy in the European Union (EU).

The power of their electoral impact is such that in 2018 characters such as Matteo Renzi (from the Social Democratic Democratic Party) and Silvio Berlusconi (from the right-wing Forza Italy) agreed to an electoral law designed to stop them.

By 2018, the M5S won 222 seats of 630, 45 mayoralties, 15 European parliamentarians, 92 deputies, 36 senators and 1,700 councilors. A third of its voters are under 35 years old and their ideological spectrum swings from right to left indifferently.

The grillinis ideologically coincide, or approach the extreme right (such as La Liga or Brothers of Italy), on issues such as European integration and immigration policy, while being more extreme than they are in the discourse against elites and corruption.

In an Italy that has had more than 60 governments in the last 70 years, plagued by a high rate of youth unemployment (36%), 30% of new voters have come to recognize that they would favor this innovative party in almost everything: it was the first to be born from a blog, also the first in Europe not to present a specific ideology and a pioneer in winning elections on its  debut.

Its simplified and corporate language “seemed like the apotheosis of the anti-politics” according to the political scientist and academic Giovanni Orsina.

10 years after its emergence and with such intense growth, its anti-system stance has been giving way, softening its anti-European discourse and prioritizing its relationship with the United States. Its influence on the coalition government with President Giuseppe Conte with which it keeps an alliance with other parties, has also been eroded,

The ABC article generated indications of doubt regarding the authenticity of the main evidence and, as with any fake, it was evident that it had already been published and denied some time ago, as stated by the Venezuelan consul in Milan, Giancarlo Di Martino, to ANSA :

“It is a news item already published in 2016 and it is completely false. It comes back now that (President) Maduro has called the elections and the government and opposition have appointed the council to call them. From now on, we expect a chain of fake news. “

The Venezuelan Ministry of Defense is expected to issue an expert opinion on this report, promising that the article “will be analyze point by point.”

For his part, the Minister of Foreign Affairs of Venezuela, Jorge Arreaza, spoke of “mythonomy” and “factories of lies, infamy, falsehood and slander” in the case of ABC through Twitter .

Milan’s Deputy Prosecutor Maurizio Romanelli has opened an exploratory file, with no suspects or crime hypotheses to determine all aspects of the case. The objective is to find out where this money went, if it went to the coffers of the Movement or to those of its co-founder Gianroberto Casaleggio.

It is also preparing a European investigation order to send it to the Spanish authorities. As part of the investigation, Consul Di Martino will be heard, who, according to the article, handed over the briefcase loaded with money.

In turn, Davide Casaleggio, son of the deceased politician and businessman, has filed a defamation suit that will be part of the file opened by the prosecution. “Everything is totally false. It is a false story published several times, the last one in 2016. From denials, we will now turn to lawsuits,” he said.

Manlio Di Stefano, undersecretary of the Ministry of Foreign Affairs, blamed the press for “not having verified” the authenticity of the document before relaunching it.

M5S political leader Vito Crimi and Prime Minister Giuseppe Conte have each declared on their own that this is a fake .

“A serious and respectable newspaper of the highest quality”?

“We confirm everything: ABC is a serious and respectable newspaper of the highest quality. We do our checks, we are not as stupid to publish the first information that comes into our hands,” said deputy director Luis Ventoso, when he was contacted by phone by ANSA about the false news accusations aimed at the investigation of his newspaper.

As highlighted by one of the accused, this media has claimed that the Venezuelan government financed the Podemos party in Spain and the result was that the accusations were quickly denied in court, but the entire media machinery had already done its job.

It is a virulently far-right medium that validated the Franco regime and empathized with Hitler at the time.

Some experts cited by the Nova agency report at least three errors in the document that supports the accusations against ABC :

Such details of form become essential when speaking of a presumably confidential document. Ventoso does not feel ashamed of the errors that are evident in the accusations that the journalist García Rey makes against Venezuela.

Curiously, last February a report was published by the General Inspection of Services of the Ministry of Labor of Spain that involves the Spanish embassy in Venezuela and leaders of the Spanish Popular Party (PP).

Public funds destined for health issues for Spanish migrants were exchanged on the Venezuelan parallel market and the surplus money (40 times more) ended up dedicated to the payment of repairs at brotherhood headquarters and regional homes, in replacing security fences and painting of the exterior carpentry, and the coverage of requests of various kinds unrelated to healthcare activities.

In any case, the Milan Prosecutor’s Office, although it opened an investigation, has found that there is no criminal case or investigation into the alleged financing of the Five Stars. If the money had really gone to the party, a hypothetical crime of illegal financing of parties would be prescribed from 2016.

The problem is that such base accusations distract from substantive debates, such as how many workers were killed by Covid-19 in Italy because the confinement necessary to avoid high rates of contagion was postponed.

Featured image: Front page of the Spanish newspaper ABC dedicated in its entirety to a fake news against President Maduro