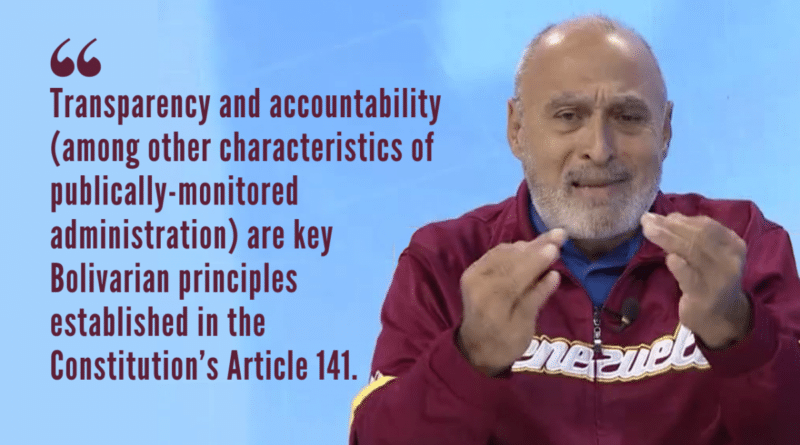 A much respected Chavista leader criticizes the recent legislation.

On October 9, 2020, Venezuela’s National Constituent Assembly [ANC] passed a controversial anti-blockade law. Supporters claim that it is needed to confront the catastrophic effects of the unilateral sanctions imposed on Venezuela, while critics allege that it breaks with the Constitution and, even worse, with the spirit of the Bolivarian Revolution. In this interview, we talk with an ANC member who opposed the law, Telémaco Figueroa, a long time left militant and a member of the PSUV.

Many within Chavismo claim that the new Anti-blockade Law breaks with Venezuela’s Constitution. You have been one of the law’s vocal critics. As you see it, what are the most problematic features of the text?

The stated intention of the law is to develop an instrument to defend the nation from the criminal and inhumane blockade imposed by the US and its allies (and promoted by rightwing and fascistoid sectors in Venezuela). However, it is quite evident that the legislation violates the Constitution and the interests of working people.

Furthermore, our Citizen Power [one of five powers in Venezuela, in charge of public matters of ethical or moral concern] – and particularly the Comptroller’s Office [in charge of ensuring the transparent administration of public resources] – is now left with a very limited limited of action because of the Anti-blockade Law’s clause granting the government the option to act with confidentiality and secrecy while the blockade and sanctions are in effect.

According to the new law, deals and transactions that the government itself deems “confidential” or “secret” will be evaluated by the comptroller only after the cessation of the blockade and aggressions. To state the obvious, this amounts to a blank check for corrupt officials in the public administration.

Additionally, the new law clears the way for the ongoing process of opaque privatizations of state property and national resources. The new piece of legislation grants the government the right to quietly negotiate with both the local bourgeoisie and the transnational corporations, thus giving a green light to the process of privatization of our common assets and resources. To state the obvious, this is a step backward, and even a betrayal of the Bolivarian project set in motion by Hugo Chávez.

Finally, the law grants the Center for Foreign Investment, a recently created government institution, autonomous powers to undertake all sorts of financial and commercial transactions. As such, this institution will manage enormous resources without any oversight.

As you mentioned, the new law allows the existing legal framework to be suspended if the government deems it necessary. Moreover, when one looks at what the law does to protect foreign investments, a troublesome picture emerges. Is it correct to say that the law damages the project of sovereignty as established in the Bolivarian Constitution?

That is correct. Bolivarian legislation states that – with a few exceptions expressly noted in the Constitution – there can be no international contracts, agreements, or associations subject to international jurisdictions. The Anti-blockade Law, in an effort to attract international investment at any cost by offering extraordinary advantages and guarantees to investors, does away with the Constitution’s premise of sovereignty regarding dealings with non-Venezuelan companies.

Additionally, I should add that, as National Constituent Assembly members, many of us did not participate in writing the law nor were we consulted. As such, we are not responsible for this piece of legislation. However, we owe the nation a long-overdue amendment of Article 303 of the 1999 Constitution [which allows for the management of Venezuelan oil resources through private subsidiaries], as it comes with a legal loophole.

This concerns the people of Venezuela because, in a context already marked by corruption and impunity, lifting the existing controls and oversight processes means that we can only expect to learn about the deals and negotiations after the blockade ends. Since the US is not likely to lift its criminal sanctions in the near future, we will only discover how our resources were traded and used far in the future.

Certainly, Article 303 is a flawed part of the Constitution, since it opens the door for covert privatizations through subsidiaries. However, the 2006 Hydrocarbon Law blocked that possibility to a certain degree. The important question now is if the new law could become a radical mechanism to foster a new version of the so-called “Oil Opening” [the wave of privatizations in the Venezuelan oil industry that occurred between 1992-1999].

More than an Oil Opening – which was perfidious but at least in public view – we are approaching an unspeakable state of affairs. And all this is happening in the midst of the oil industry’s catastrophic situation.

We cannot act merely on the basis of good-faith. In fact, our “loyalty” to the Bolivarian Process left us with the “worker leaders” and bosses in the Bolivarian Workers’ Central who decimated collective contracts, leaving employees ruined and without a salary to feed themselves, without other historically-acquired rights, and with no social benefits to speak of.

RELATED CONTENT: Luis Britto García: “I Hope Those Leading the Government Know how to use the Anti-Blockade Law for the Good of the Country”

Again, all this happened under the aegis of good faith, delegating too much trust in one person, President Nicolás Maduro, who has been swathed in a discourse of ill-conceived loyalty and discipline.

Article 303 is problematic because it potentially allows for a piecemeal loss of the oil industry, which the nation must fully control. Opening the door to subsidiaries, which 303 permits, is a loophole that should now be eliminated. Instead, with the new law, the government seems to want to go beyond even that flawed article and open not only to subsidiaries but also to other more problematic “associations.”

Finally, another concern is that this doesn’t only pertain to the oil industry, but also the gas and mining sectors. In whose hands will all these resources end up? Can we trust them, while we are blindfolded?

In no way can we approve of this. We cannot sign blank checks! We cannot endorse this process! As anti-imperialists and Bolivarians, we must oppose it.

You mentioned that one of the most disturbing elements in the Anti-blockade Law, something that also worried writer Luis Britto Garciaand Constitutional Assembly member María Alejandra Díaz, is the “confidentiality” that it establishes. Obviously, such opacity could be used to strike unfavorable deals with foreign capital. The law frees up the executive branch to use resources in a sort of budgetary limbo. Of course, we understand that Venezuela is under siege, but does this clause contradict what the Constitution established?

Transparency and accountability (among other characteristics of publically-monitored administration) are key Bolivarian principles established in the Constitution’s Article 141. Additionally, Article 143 grants all citizens the right to truthful and timely information. These articles are not open to any other interpretation. What is more, they are central to the functioning of a popular, Bolivarian democracy.

The blockade is not only criminal, it is also very radical. As such, it requires a radical response. That being so, what measures of a popular nature do we need now?

In the face of the debate and criticism, the government added a few elements to the text that the ANC approved. Nonetheless, these changes – such as granting the communes or workers the option to invest under the same terms as corporations – are cosmetic ones.

It concerns us a great deal that key government spokespeople such as Jorge Rodríguez say that what Venezuela requires is “production and wealth.” What we really need is balance in the economy. That means reversing the current trend to favor the working people, since we are the ones who are bearing the brunt of the crisis. Unfortunately, many people in the government act, speak, and think as members of the bourgeoisie. One would think that they never stood by Commander Chávez’s side.

If Chávez, always with the people, were to return, I have no doubt that he would get rid of them for being incompetent and helping the economically fittest, the most privileged sectors in society. He would dismiss them for letting this country soak in corruption and impunity. They put in place a kind of “ley del embudo” [funnel law]: I mean the wide opening is for the old and new bourgeoisie, and the narrow end is for the working people.

One of the pending tasks in our times is to fight against corruption. In this regard, we should remember that President Nicolás Maduro presented the ANC with an anti-corruption law proposal. However, the proposal died right there and then: it was never even debated. In fact, we witnessed a 180-degree turnaround, and the proposal ended up in the Assembly’s dusty archives. Impunity is destroying our country as termites destroy furniture.

As a constituent deputy, I call for the ANC to keep its doors open, to debate and approve a strong anti-corruption law. It should only have one aim: save the country by bringing an end to rampant impunity in the (mis)management of national resources.

For now, and given the government’s current attitude, there is nothing left but denouncing things, mobilizing the working class, and using all the resources that our own legal system gives us to confront the privatizers. Socialism cannot be built with the bourgeoisie; it cannot happen miraculously without the workers.

With things as they are, we have no option: we must be willing and prepared to denounce the criminal blockade, but we also have to struggle toward correcting the Bolivarian Revolution’s path. This means speaking out, mobilizing in the street, and employing all the legal instruments we have available to stop the rapid process of opaque privatizations that is underway.

Socialism will not happen if we join hands with the bourgeoisie. It is we, the working people, who are called upon to carry out the task of saving humanity.