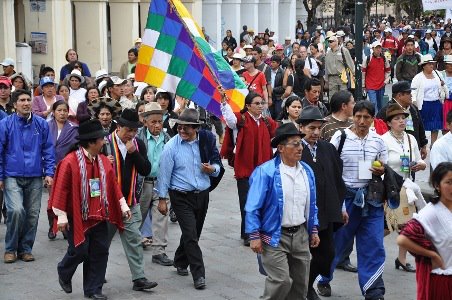 President Lenín Moreno was elected freely and democratically in 2017, by Ecuadorian citizenship because, as it was presumed then, he represented the continuation of the Citizen Revolution of former President Rafael Correa Delgado and that due to the important economic and social conquests achieved during his period of management, it was called “the decade gained”. At that time, we were far from suspecting that the neoliberal turn that Lenín Moreno would take would lead us to face one of the most disastrous stages in the history of Ecuador.

Moreno was in charge, from the beginning, of shamelessly discrediting the Citizen Revolution and former President Correa, to the point of accusing them of being corrupt, achieving, by force of repeating that lie permanently, creating an atmosphere of sickly hatred in the opinion of the uninformed public.

The local media, paid by the Ecuadorian government, flagrantly hide the real news and of course the severe crisis facing the Ecuadorian people these days, after President Moreno announced a package of economic measures that directly affect the most vulnerable in the country.

While the government, at the IMF’s orders, has blatantly benefited businessmen, bankers and oligarchs, in turn it has disadvantaged most citizens by making their socio-economic situation precarious, causing massive layoffs in the public sector, increasing taxes, privatizing state goods and services, removing subsidies for essential products, which obviously increases the cost of living, neglecting the educational issue, as well as the creation of infrastructure and, most seriously, even indebting the country to the IMF, which finally has resulted in this impressive social reaction, in the midst of which, it is necessary to take into account that the problem is not only in economic measures, but there is an issue that is essential to mention: labor “reform” that violates historical rights, precarious work and flexible working hours.

We know with certainty that neoliberalism, as an ideology welcomed and adjusted to the interests of the business elites of Latin America, has not generated any economic benefit, but a set of recipes that are repeated as slogans to force governments to comply with them.

Ecuador is a country that has been characterized by its decisiveness and ability to get rid of presidents when extreme cases have required it. The massive social mobilizations that we live in these days, especially by indigenous communities, are the result of the outrage and exacerbation of a worthy and courageous people, of an impoverished and exploited people by a government that has betrayed us and that can not stand more abuse.

It should be noted that these popular demonstrations, unfortunately, have been marked by a very strong armed repression by police and military, leaving as a result several dead and wounded, frontal and brazen aggression to independent journalists, the power cut of community and alternative media and radios. The violence and arrogance of the right-wing leaders who are behind the power of this government have demonstrated their darker and more despicable side.

At the moment we have the government palace completely surrounded and protected by tanks, barbed wire, with the presence of military and police as in the most dire times of dictatorships. The streets full of oppressive forces that assault and imprison the protesters for no reason. It is an environment of chaos that we were no longer accustomed to, even worse after having enjoyed a progressive decade of peace and justice in our Homeland and that allowed us to dream of a better future for our peoples.

We hope from the heart that the outcome of this dramatic episode is to achieve a free, fair and sovereign country, the country that all the peoples of the world deserve.