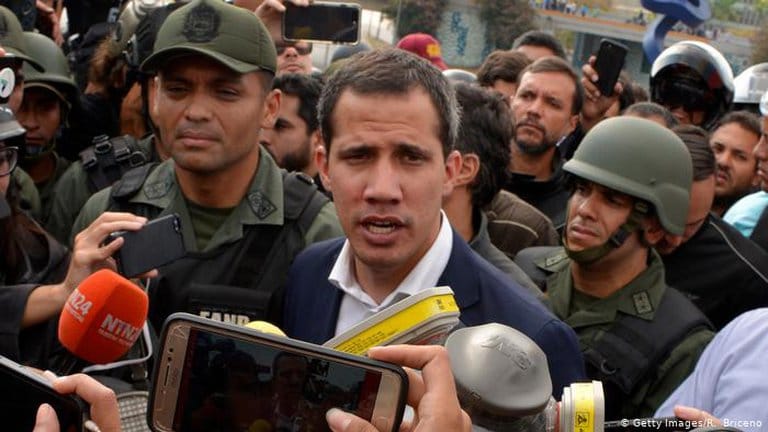 Now that his term in the National Assembly has ended and Trump has been ousted from the White House, should Guaido face justice?

The question of what should be done with the already diminished figure of “Interim President” Juan Guaido has become a recurring theme in political circles in recent days. For those of us who have had the opportunity to be part of the debate, we have come across different approaches which should be examined.

Firstly, it is pertinent to state that there is currently an opportunity to act. This opportunity was presented by the January 5 installation of the new National Assembly as well as the new tenant moving into the White House. The outgoing tenant is largely considered to be the creator of this local Frankenstein’s monster.

These two elements are relevant in analysing the issue. First because theargument backing Guaido’s purported interim presidency now has no bearing in the country’s internal order, given the renewal of the National Assembly in line with article 219 of the Constitution.

Second, in foreign policy terms it is unclear whether Mr Biden, the new boss of the United States, is going to continue the farce that his predecessor began. The policy of backing Guaido has turned out so terribly for the Trump administration that even US political analysts have stressed that it had a negative impact on the outgoing president’s adverse and traumatic electoral results.

On the basis of these considerations, several colleagues have expressed their criteria about what to do with Guaido. Some have said that the now common citizen (1) must be put on trial immediately after the installation of the new National Assembly to answer to the serious consequences of hisanti-patriotic actions to the Republic and the Venezuelan people.

Likewise, they argue that all those who served as US puppets must also be prosecuted alongside him. According to this viewpoint, the crimes committed are of such a magnitude that impunity is not an option under any circumstances, and measures must be taken to avoid any possible flightby these nefarious individuals from Venezuela.

Others, who are more cautious, argue that while Guaido and his henchpeople deserve the strongest sanctions for their lack of patriotism and for the theft of national resources, turning them into martyrs must be avoided.

These colleagues argue that this is what would happen in the event of his imprisonment, with his cause being taken up by the international Right and the media corporations to strengthen their destabilising campaigns. In addition, at this point it is not yet clear what policies the new imperial administrator will apply towards us [or Guaido].

‘With the devil himself’

On the other hand, there are those who argue that in order to ensure peace as well as greater political and institutional stability, we must promote and achieve an ample national dialogue.

This dialogue, it is presumed, would inevitably involve stimulating and accepting conversations with the Guaido sector. In other words, dialogue is necessary with the subversive and insurrectional opposition that promoted the assassination of President Nicolas Maduro. For the sake of social peace, some argue, you have to be willing to sit down and talk “to the devil himself,” or, as would be the case with the US government. This dialogue would have to be held under the basis of mutual recognition and respect.

Those are the different approaches to the problem at hand. However, in order to address the problem, it is pertinent to incorporate issues of an ethical and moral nature to the implicit political, economic, geopolitical elements.

Guaido’s actions, as well as those of the company he kept, are of such a magnitude, directed against the government but above all against the country and the Venezuelan people, that there can be no excuse for covering them up.

Guaido’s conduct has been criminal without any doubt, underpinned as it was by an imperialist power and the Right. It has spared no perversity in order to achieve its anti-objectives: to call for foreign military intervention; to help expropriate Venezuela’s foreign based resources; to instigatesabotage in the public services; to attempt murder; to encourage the breaking of supply routes for food and goods needed for the productive apparatus; to usurp offices that do not correspond to him; to enter into pacts with paramilitary drug lords; to promote an economic, commercial and financial blockade against the country without weighing the consequencesit may have for the lives of Venezuelans; to attack the health of the people bypreventing the import of medicines, particularly during the pandemic; to promote smear campaigns against the country in international forums; to try to negotiate our [disputed] Essequibo territory; to put himself at the service of foreign powers without concern about undermining national sovereignty; to enrich himself at the expense of the people’s resources; to lie to his own supporters by creating false expectations, thus incentivising a greater dissociation; to undermine the fundamental role which the National Assembly plays in the Venezuelan republican structure, in short, a whole slur of selfishness, anti-values, anti-Venezuelanism, anti-patriotism, anti-people acts which have brought tragic consequences for the political, economic and social life of Venezuelans.

Guaido’s behaviour and that of his closest partners has affected the lives of both Bolivarian supporters and opposition sectors, essentially the people as a whole.

This has led him to undergo increasing isolation and rejection by the majority. This is visible by the meagre turnouts when he calls the people to demonstrate in the streets or participate in the pathetic December consultation, which ended in a genuine and obvious failure. For this reason, he and his henchpeople deserve a heavy punishment.

But, at the same time, there is a need to create the basis for a national dialogue that may allow the country to get out of the political crisis, as well as to lead it on a path of economic and social recovery. It is understood that in this dialogue it is important to guarantee the widest possible participation. However, there is a dilemma: will it be necessary to overlook the crimes committed by Guaido for the sake of national coexistence.

The answer to such a dilemma is first and foremost in the ethical and moral sphere, which is also political.

In the face of Guado’s criminal conduct there can be no rebuke other than punishment. The Venezuelan people would not understand any other way out of the problem as it would leave the conduct of those who have acted so perversely against the national interests unpunished, which would be a negative learning.

Not punishing them would strengthen a haven against social morals and would in no way contribute to the objective of promoting national convergence. Those who converge, reconcile or participate in dialogue are those who understand the need and meaning of doing so, which is not Guaido’s case. Many [in his team] have already benefited from judicial pardons for their actions, but instead of taking advantage of the democratic practice they persist in the practices of subversion and terrorism.

On the other hand, it is clear that we must converse with the new imperial administration, as President Maduro says, without any prior conditioning. This dialogue with Washington, however, cannot be subject to the demand of exempting Juan Guaido and company from their responsibilities.

(1) National Assembly deputies enjoy parliamentary immunity while in office. However, Venezuela’s Supreme Court removed Guaido’s immunity in April 2019, essentially opening him up to judicial proceedings. There are currently a number of criminal cases open against him, but no action has been taken to date.

Featured image: Many have called for Juan Guaido to be prosecuted for his crimes. (Getty Images)

Miguel Ugas is a Venezuelan sociologist and director of the alternative newspaper ¿Y Ahora? (And Now?). He is also a member of the national leadership of the Alternative and Community Media social movement (MoMAC).