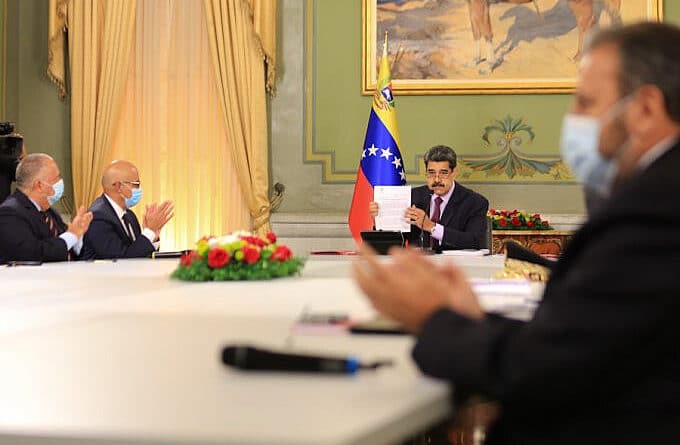 This Thursday, January 7, the president of the Bolivarian Republic of Venezuela, Nicolás Maduro, held a meeting with the National Defense Council (CODENA) and the Council of State, in order to reinforce the rejection of the decision of the International Court of Justice regarding the Esequibo territory. “It is a cause of the entire nation to fight against the dispossession of a territory that has always belonged to Venezuela. Guayana Esequiba has always been a territory of Venezuela, it is confirmed by the documents, the maps. We have suffered an imperial dispossession,” highlighted the president.

Also present at the meeting held at the Miraflores Palace were the presidents of the parliamentary commissions of the National Assembly, the executive Vice President Delcy Rodríguez, and the Minister for Foreign Affairs Jorge Arreaza.

On December 18, 2020, Venezuela rejected the decision of the International Court of Justice (ICJ) that the nation considers to be contrary to the spirit of the Geneva Agreement regarding the Esequibo territory, and through an official statement expressed its response against the unilateral claim filed by the Cooperative Republic of Guyana against the Bolivarian Republic of Venezuela regarding the validity of the Arbitration Award of 1899.

At that time, Venezuela informed the national and international community that the Geneva Agreement is the only binding bilateral norm in force that is applicable for settlement of the territorial dispute through friendly negotiations. Therefore, it makes unnecessary any judicial means, incapable of reaching the practical and satisfactory arrangement that this Treaty imposes on both parties.

At the meeting, Maduro informed that a letter will be delivered to the Secretary General of the United Nations, Antonio Guterres, with the aim to defend the Esequibo territory, thus maintaining peaceful negotiations in accordance with international law.

“We believe that now more than ever it is necessary to count on your good will,” writes the Venezuelan Head of State to Guterres in this letter, “with your good offices in the broadest sense possible to restart, with the urgency that this controversy warrants, direct talks between Guyana and Venezuela, with the objective of advancing towards a peaceful understanding that may be beneficial to both parties.”

“We want to solve this through words, dialogue, agreement, international law. Venezuela has its historical rights guaranteed,” said Maduro. 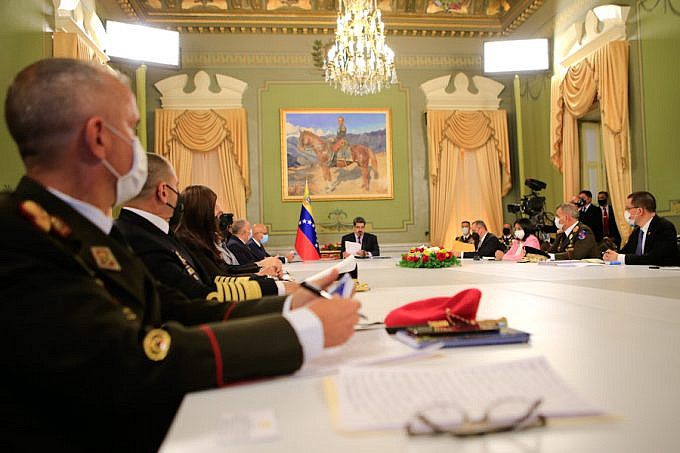 Among the aspects highlighted in the letter to be sent to the UN Secretary General by the Venezuelan President are “the various events that seek to influence the existing territorial dispute between the Cooperative Republic of Guyana and the Bolivarian Republic of Venezuela and its due resolution through peaceful negotiation as contemplated in the 1966 Geneva Agreement.”

In this letter, Venezuela also maintains that “it has never given its consent for the Court to hear about the territorial dispute over Guyana Esequiba, and even less to involve itself in a unilateral action brought by Guyana, on a legal matter—the Arbitration Award of 1899—that has been already overcome,” according to the document read by the President to the dignitaries present at the meeting.

In the letter addressed to Abdulqawi Ahmed Yusuf, President of the International Court of Justice, the Venezuelan President demands that the Venezuelan nation be guaranteed the right to defense in all matters concerning the territorial dispute over Esequibo.

The Head of State denounced the suspicious actions of the representative of said international organization, who seeks to expedite a partial sentence with those who intend to deprive Venezuela of its territory. “Normally for any court case, it would take about 3 months or more to convene a hearing between the parties to see the decision of the Court. In this case they intended to impose a hearing on January 15 without Venezuela knowing the official decision delivered with stamp and signature of the court,” he denounced.

The Venezuelan Government demanded that the date of the hearing be changed, and it was postponed to January 25. “It is still a strange, abrupt decision, acting in this hasty manner, trampling on the rights of Venezuela,” said the Head of State, when other cases have extensive time for a decision or sentence by the said body. “It has acted in a strangely irregular way,” stressed the Venezuelan President when referring to the current head of the International Court of Justice, whose term ends this coming February. The President suggested that oil transnationals are pressurizing the ICJ to announce a hasty decision.

“The opposition deputy, Timoteo Zambrano, was saying that behind all this is the oil lobby that wants to take over the Atlantic region of Venezuela, to put its claws in the oil reserves and steal the oil that belongs to our country,” he said. “Behind all this is the US lobby, the British lobby; the lobbyists that stripped Venezuela of this territory illegally and unfairly,” reiterated Maduro.

The Head of State ordered the Council of State and the Defense Council to establish the necessary arguments and strategies together with the Public Powers established in the Venezuelan nation, to denounce the interventionism in the territorial dispute, and to demand the rights of Venezuela.

For his part, the president of the Legislative Power, Jorge Rodríguez, pointed out that the National Assembly will develop all the strategies required for the defense of the Esequibo territory in accordance with the Geneva Agreement, in addition to the formation of a permanent commission in this body. “Today two conclusions have emerged regarding this issue,” informed Rodríguez. “An agreement has been approved unanimously repudiating the decision of the ICJ, and, on the other hand, a decision has been adopted to create a commission for the defense of the Esequibo territory,” he explained.

President Maduro, in turn, signed the letter that will be sent to the International Court of Justice to request the extension of the hearing scheduled for January 25 by the president of the ICJ, asking that it be held in April, in person and following all the biosafety measures for the pandemic. “The central objective in this entire stage is the unity of all Venezuelans, and we must communicate to the world that Esequibo is ours and we will defend it,” stressed the Head of State.