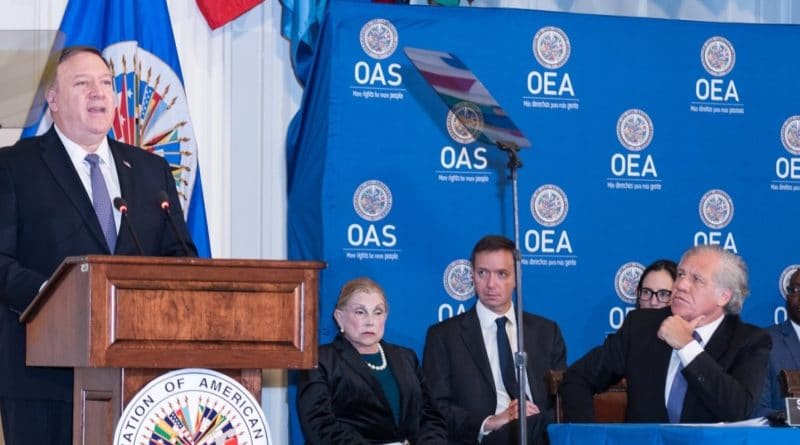 Members of The Grayzone and the peace organization CODEPINK held a press conference outside the headquarters of the Organization of American States (OAS) in Washington, DC to call on the international body to provide independent election monitors for the 2020 Democratic primary.

Before the presser, The Grayzone editor Max Blumenthal directly addressed OAS Secretary-General Luis Almagro, who was getting in a car outside the building.

“Will you send OAS monitors to the Democratic primary?” Blumenthal asked. “Why do you only monitor elections that you target for regime change?”

“And how do you account for your failure in Bolivia?” Blumenthal continued. “Researchers from MIT have discredited your findings in Bolivia.”

Almagro did not respond to any of the questions.

We tracked down OAS Secretary-General and coup monger-in-chief Luis Almagro and asked him about his organization’s fully discredited claims of fraud in Bolivia and whether he would apply similar scrutiny to badly flawed US elections. He pulled away as fast as he could. pic.twitter.com/a0xitAG6oz

Blumenthal “demanded that the OAS send election observers to the 2020 Democratic primary so that the OAS will apply the same scrutiny to the United States as it does to countries targeted by the US for regime change.”

Live-streaming with @codepink and the local democracy promotion community at the OAS building to demand election monitors for the Democratic primary.

The OAS must apply the same scrutiny to the US as it applies to countries targeted for regime change. https://t.co/2otej9C5UL

Blumenthal noted that there have been many irregularities and signs of voter suppression in the Democratic primary.

“LULAC, the oldest Latin American civil rights groups in the US, has found that there is a systematic effort at minority vote suppression, where we have seen sign lines for five hours at polling places, particularly in poor and minority communities,” he said.

“We have seen Texas get rid of 750 polling places in the last eight years, which means there is one polling place for every 7,700 people in Texas,” Blumenthal continued.

“Then we have seen clear irregularities between the exit polls in the state primaries and the final computer results, which are tabulated by an opaque system that the US relies on that no other country uses.”

Blumenthal was joined by Anya Parampil, host of Red Lines and correspondent at The Grayzone, who explained how the OAS, under the leadership of Almagro, “has been willing to bend its own rules in order to recognize the phony ambassador from Venezuela to the OAS, Gustavo Tarre. And this is in spite of regulations in the OAS charter which forbid it from involving itself in the internal affairs of any member country.”

Venezuela and other progressives in Latin America see the OAS “not as an organization of American states, but an organization of the United States,” Parampil noted, pointing out that Washington funds more than 60 percent of the body’s budget.

“Yet the OAS has only ever sent an election observation team to the United States once,” she added. “It is very that it is an organization that only exists to uphold governments that are targets of US imperialism accountable under phony standards. And so that is why we are making this point today.”

“We of course do not expect Luis Almagro to heed our call because he does not answer to us, even though we are paying his salary,” Parampil concluded. “He answers to his answers in the White House and the State Department.”

CODEPINK campaigner Leonardo Flores, a Venezuelan citizen, also spoke at the press conference. He noted the many irregularities in the Democratic Primary and the double standards of the OAS.