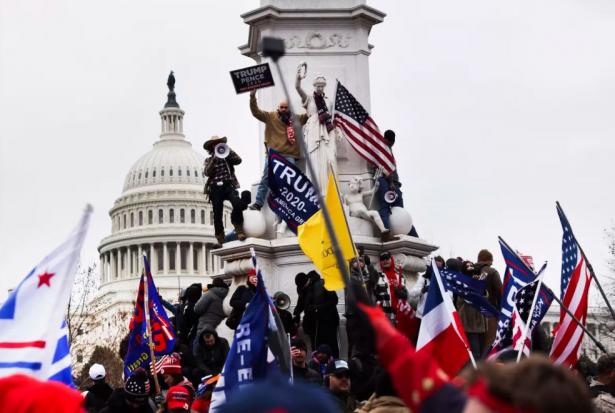 Across the country, protesters have rallied outside, as well as inside, state capitol buildings over Trump’s false claims of voter fraud.

A mob of President Donald Trump’s supporters stormed the US Capitol building Wednesday afternoon, abruptly halting a session of Congress that was supposed to certify President-elect Joe Biden’s win.

Just hours after Trump encouraged the crowd at a rally to “take our country back” and his lawyer Rudy Guiliani suggested “trial by combat,” hundreds of people clad in Trump gear, some carrying Confederate flags, climbed the steps of the building, breached barricades, broke windows, and entered the halls of the Capitol — an insurrection that threatened the lives of lawmakers inside.

But it was too late. Moments before Trump’s statement, one person was shot and later died, according to DC Emergency Medical Services, with at least five others being transported to the hospital. And uprisings had already spread to other parts of the country.

Capitols across the country also saw rallies and violence

In conjunction with the Senate certification vote, protests were planned in cities across the country on Wednesday, in which organizers planned to “stop the steal” and contest the fact that Joe Biden won the presidential election. Though many protests remained peaceful, some turned odd, and others violent.

Pro-Trump rioters in Arizona gathered by the hundreds to demonstrate anger and deny the election results. They could be seen in videos banging on the locked doors of the state capitol building in Phoenix. The group struck on the window until the glass fractured. 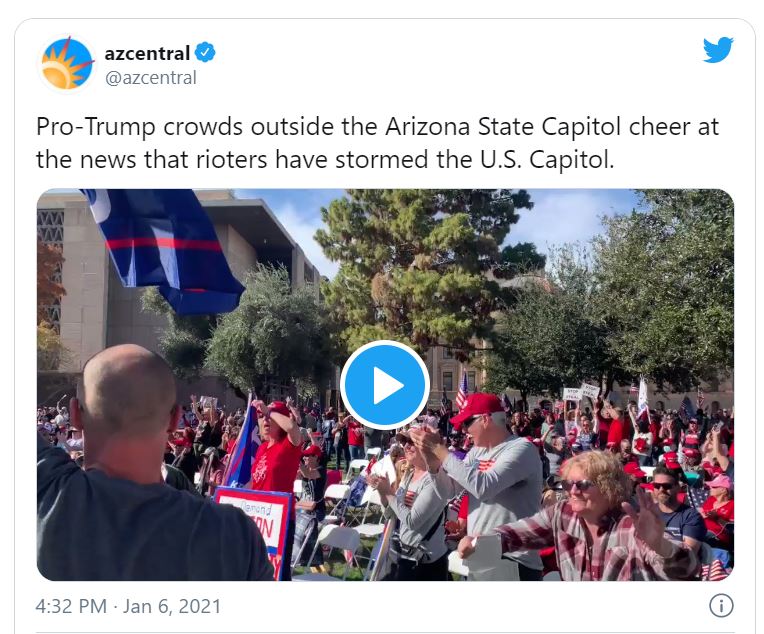 Another group brought a guillotine to the gathering, which they explained in a letter obtained by the Arizona Republic. The letter contained misinformation about the election outcome and voter fraud and expressed their feelings toward a potential war:

“You may ask why we are here, why do we have a guillotine with us? The answer is simple,” the document read. “For six weeks Americans have written emails, gathered peacefully, made phone calls and begged their elected officials to listen to their concerns. We have been ignored, ridiculed, scorned, dismissed, lied to, laughed at and essentially told, No Ones Cares.”

“Let it be known, if the Constitution, our way of life, and the Freedoms that we hold so dear are threatened by internal or external enemies, we will rise to the challenge and defend this great nation by all means necessary. While we pray for Peace, but we do not fear war.” 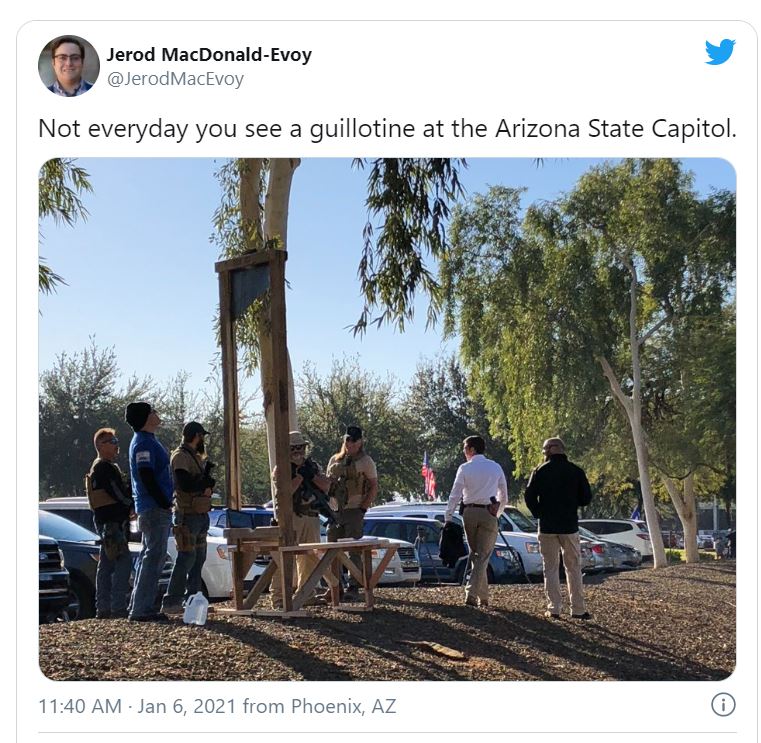 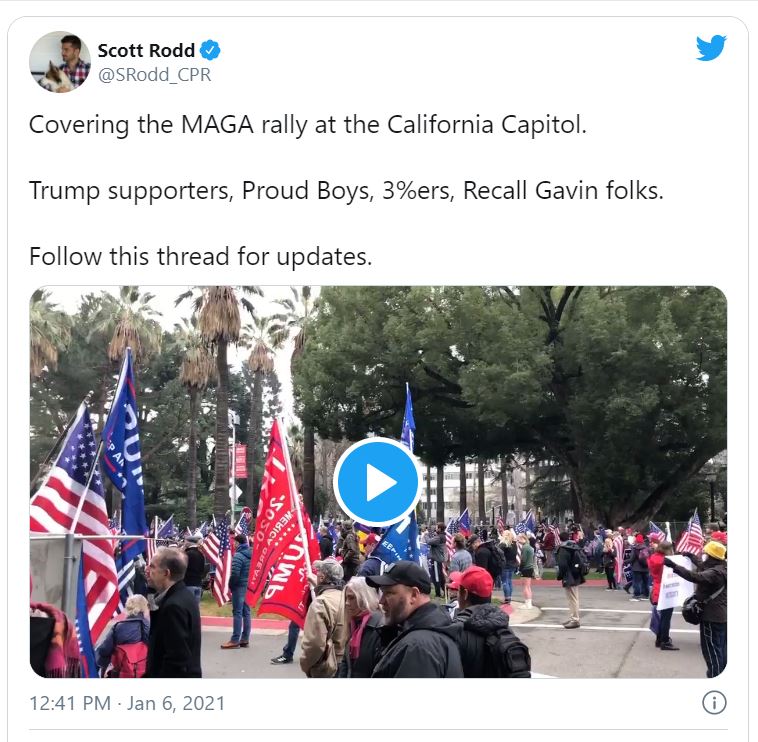 Denver officials closed offices early as a precaution, and state police suited up in riot gear. 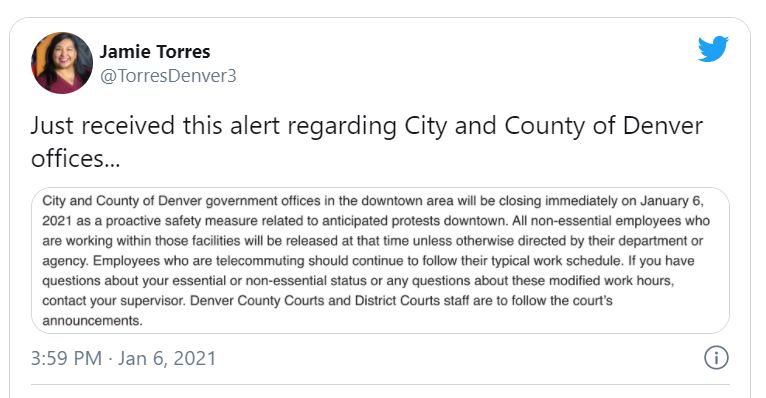 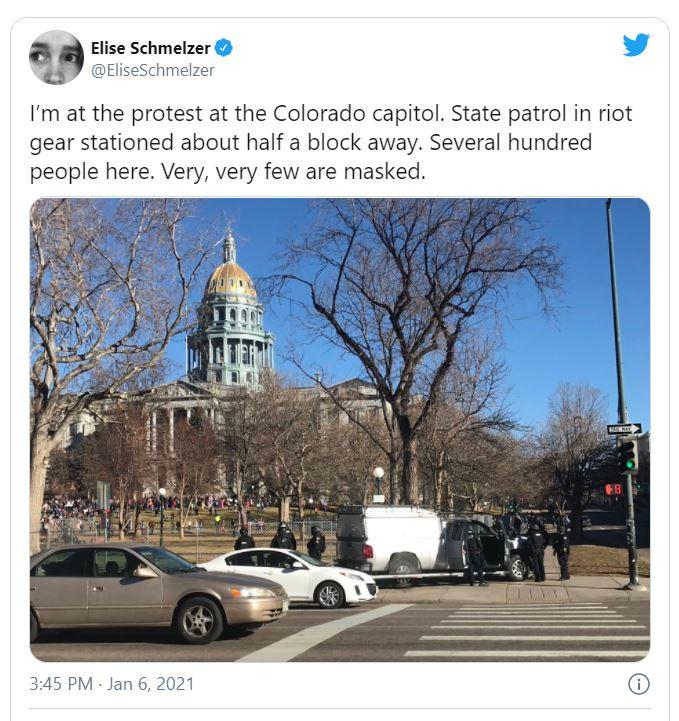 In Florida, about 150 Trump supporters, including dozens of Proud Boys, rallied outside the state’s capitol in support of the “Stop the Steal” movement. One publication described the gathering as tame, with protesters praying together as early as 8 am. By afternoon, the large crowd broke off into smaller groups.

Just a day after Georgia held its runoff elections — with Democrats winning control of the Senate — senior staffers, including Georgia Secretary of State Brad Raffensperger, were escorted out of the state capitol building as a group of demonstrators rallied outside. Tensions rose after the insurrection in DC unfolded. 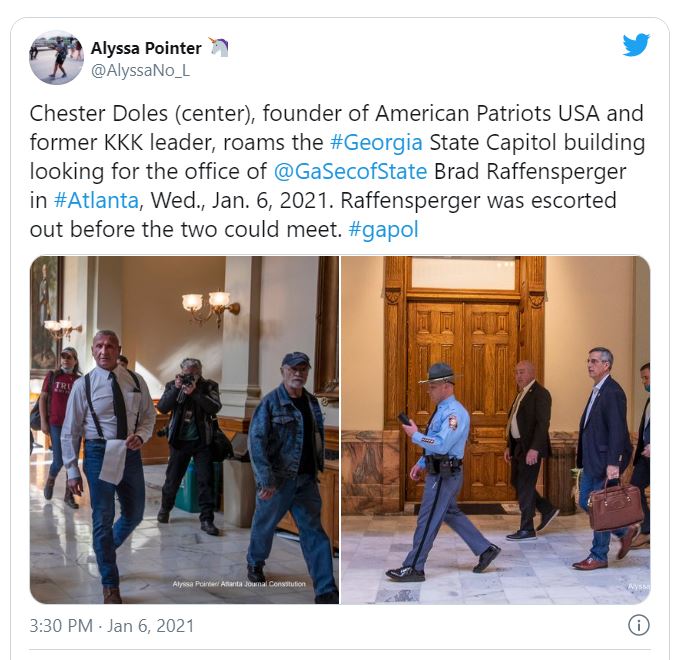 Demonstrators moved into the Kansas Statehouse on Wednesday afternoon after hundreds of people demonstrated outside the building earlier in the day. According to local news outlets WBIW and KSNT, protesters had permits and followed protocols as they contested the count of electoral votes in Washington, DC.

More than 500 Trump supporters in St. Paul cheered when they learned that a mob had breached the US Capitol on Wednesday. According to the Star Tribune, some in the group dressed in Colonial-era costumes and spoke about being ready for battle as they rallied for about four hours. State troopers guarded the state capitol and Gov. Tim Walz’s residence where the pro-Tump supporters landed. Among the group were Three Percenters, members of the Boogaloo Boys, and local Republican lawmakers who emboldened the Trump supporters.

Officials evacuated the Roundhouse in Santa Fe on Wednesday afternoon as an estimated 500 Trump supporters gathered outside of the building and terror escalated in Washington, DC. According to a local report, supporters arrived by car, truck, and horseback to fight the Electoral College ballot count. Participants placed signs around the Roundhouse that read “End the Lockdown” and “We want honest elections.” 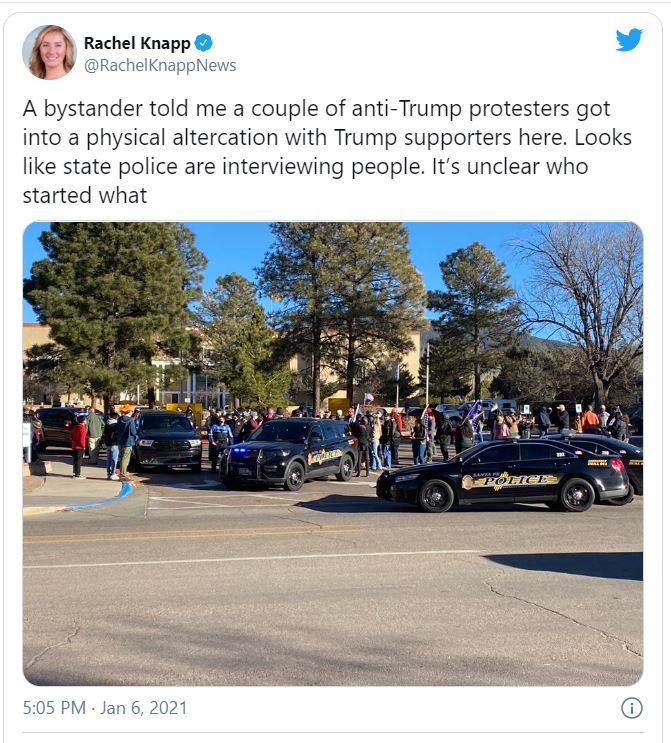 Outside the New York Capitol in Albany, where Gov. Cuomo was delivering an address about his coronavirus plan, two people were taken to the hospital and one person was taken into custody in connection with a stabbing. Law enforcement told reporters that the violence stemmed from a protest that was underway just outside the state capitol.

At the statehouse, members of the Proud Boys and other Trump supporters clashed with Blacks Lives Matter supporters early in the afternoon. Video captured by the Columbus Dispatch showed a white man punching a Black man amid an altercation near the statehouse. Other videos show larger clashes involving dozens of participants, with police officers and Ohio Highway Patrol trying to deescalate the violence.

In Oregon — where unrest continued for months in 2020 after the police killing of George Floyd, and federal agents abducted protesters in unmarked vehicles and counterprotesters escalated tensions — officials made the decision to close the capitol building to public and staff all day Wednesday. In the afternoon, hundreds of Trump supporters marched around the capitol in Salem to contest the election and dispute the state’s coronavirus regulations. The crowd even burned an effigy of Gov. Kate Brown, according to Oregon Live. Just two weeks ago, about 50 people, including Patriot Prayer members, reportedly pepper-sprayed a line of officers and broke into Oregon’s capitol in protest over coronavirus restrictions.

At the Texas Capitol, hundreds of pro-Trump demonstrators gathered as the insurrection broke out in Washington. Officials were quick to shut down the building and surrounding complex to “maintain public order and address public threats,” according to the state’s department of public safety. 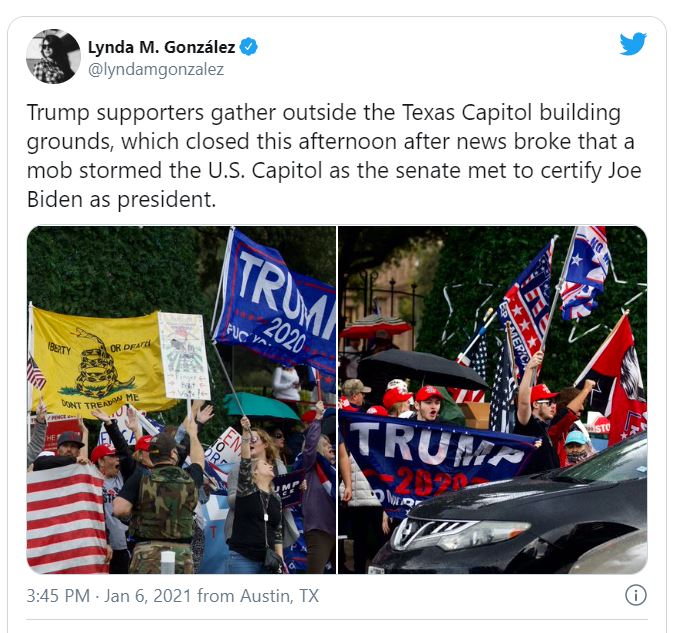 “Stop the Steal” proponents joined together at the Utah Capitol (all officials were evacuated in the afternoon), carrying thin blue line flags and signs that read “Election fraud is treason.” Though the gathering of hundreds remained mostly peaceful, according to the Associated Press, there were some clashes. A Trump supporter pepper-sprayed a Salt Lake City Tribune photographer. In response, the city’s mayor tweeted, “An assault on a journalist is an attack on freedom of press and democracy. This is unacceptable, and should not be allowed to go unchecked.” 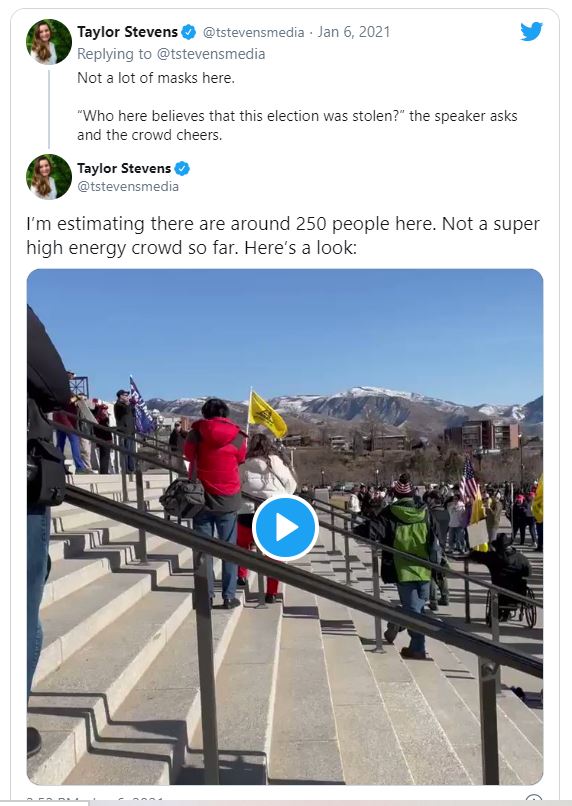 According to the Salt Lake Tribune, the crowd of about 300 chanted “USA! USA! USA!” and “Recall Romney.” In the evening, Sen. Romney made his thoughts clear in a statement:

What happened here was an insurrection, incited by the President of the United States. Those who choose to continue to support his dangerous gambit by objecting to the results of a legitimate, democratic election will forever be seen as being complicit in an unprecedented attack against our democracy.

At least three rallies were planned in Olympia, Washington, where rallygoers protested the election results. At the capitol building, Patriot Prayer members made speeches about the need to “speak truth” and carried flags that read “Trump is our President.” When one participant announced that the US Capitol had been breached, people cheered and he claimed “It’s war now!” according to the Olympian. Dozens of people made their way to Gov. Inslee’s mansion, where they breached the gates. They were unable to enter the home.

rhetoric about the election. In Pennsylvania, rallies to stop the certification of the 2020 election largely took place on Monday. In Idaho, a rally run by an organization called MAGA Girl brought forward speakers who spewed false claims about the election, according to the Idaho Press, though it was relatively calm. In Baton Rouge, Louisiana, organizers gathered on the Capitol’s steps, flew “Don’t Tread on Me” and “Keep America Great” flags, and criticized Republican Sen. Bill Cassidy, who called on Trump to condemn the violence on Wednesday. Speakers at a rally in Oklahoma City disputed the results of the election and called Biden an illegitimate president; some attendees carried guns and wore body armor. In Michigan, an estimated 700 to 800 people, many without masks, kept their rally outside of the capitol building in Lansing, with some delivering speeches about how they doubted Michigan’s vote count.