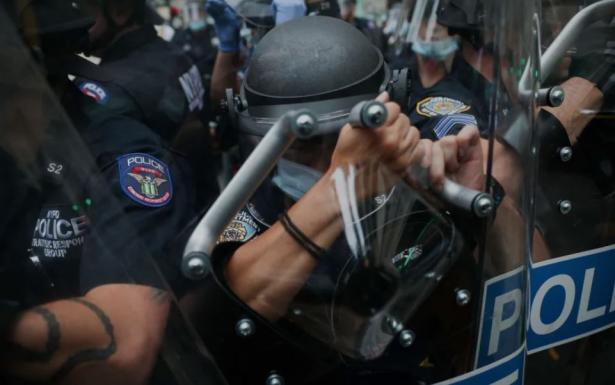 What happened to Stone should be a wake-up call to anyone who thought police violence would confine itself to Black, brown, and poor communities. That she was snatched from a dense throng of protesters shows the sophistication of NYPD surveillance.

On July 28, a couple of hundred protesters in Manhattan watched helplessly as 18-year-old trans woman Nikki Stone was snatched off the street by plainclothes officers, shoved into an unmarked van, and taken who knows where.

Protesters were met with pepper spray to the face. Shortly after, video of the kidnapping was posted on Twitter for the world to see.

In the months since the murder of George Floyd sparked nationwide protests against systemic racism and unjust policing practices, we’ve witnessed in person and on video federal and local law enforcement officials terrorize and brutalize protesters with impunity, making it ever more clear that we’re on the road away from democracy and getting closer to fascism. Just days before, we watched federal officers in Portland, Ore., snatch protesters in similar fashion. So, naturally, when Stone was taken, messages of fear and confusion proliferated quickly online. Were these federal officers? NYPD? Without clear markings, were these officers at all? An NYPD social media account came forward to take credit for the kidnapping, while also falsely claiming that officers were assaulted with rocks and bottles.

To those outside New York City’s border, and some within, this was new, novel, and terrifying. To those of us who have fought police terror in the city, it’s the same NYPD we’ve always known.

The division responsible for Stone’s kidnapping is known as the “warrant squad.” The name makes it sound like the officers ride around town like the A-Team, taking down the toughest criminals with unorthodox tactics, but for the right reasons. Quite the opposite. The warrant squad marshals the full weight of the department’s multibillion-dollar budget to terrorize the city’s most vulnerable communities.

A 2015 investigative report by John Surico for Vice highlighted the warrant squad’s repeated raids of homeless shelters—with a majority of arrests coming for nonviolent, minor offenses.

“When I asked homeless people why this is happening, most said it was to meet quotas—the statistics-based policing that critics (and even some police officers) say is encouraged by One Police Plaza—and that the homeless arrests can act as fodder for the stats,” Surico wrote. “This, they argued, may explain why the raids fluctuate: Some months have low numbers, perhaps meaning the cops don’t need as many arrests; when the raids go up, the cops are presumably in need of some juice.”

As a former public defender, I’ve witnessed this police work masquerading as public safety up close. In the early years of my career, parades of warrant squad detainees were regularly marched into court, the rattle of chain gang shackles filling the room. Some were partially clothed, others missing shoes. The infractions that justified their appearing in this dehumanizing state were almost always dismissed. One by one, they were unshackled and sent on their way—the state acting like nothing had ever happened. Until the next raid.

Unlike many of the warrant squad’s incursions over the years, what happened to Stone on Tuesday night was witnessed by hundreds of thousands of people via cell phone cameras and social media. Several New York City Council members joined the righteous torrent of outrage, but many chose to look good rather than to do good when the time arrived to hold police accountable.

Last month, a multiracial coalition of New Yorkers did their part in working to disempower an out-of-control police force by advocating a $1 billion divestment from NYPD and an investment in social services. Those efforts were met with political chicanery when the City Council passed a budget that failed to cut the police budget in any meaningful way. The same legislators who are standing up now to express outrage and demand answers about Stone’s arrest sat down when their time came not just to demand accountability but to make real and lasting change.

What happened to Stone should be a wake-up call to anyone who thought police violence would confine itself to Black, brown, and poor communities. That she was snatched from a dense throng of protesters shows the sophistication of NYPD surveillance. This was an intentional act meant to send a message to protesters: Speak out, and you too can be disappeared. If this happened in another country, we’d be condemning the regime responsible, as we frequently do when foreign regimes that aren’t allies use their police forces to brutally suppress dissenting speech.

But it is easy to call out oppression beyond our borders, harder to do so when our government is waging violence and oppression against our own people. Difficulty cannot be a deterrent. History shows what happens when we fail to uproot oppression. The prophetic prose of Martin Niemöller’s “First They Came…” rings loudly in my head. “First they came for the Communists / And I did not speak out / Because I was not a Communist…” What started in the dark of night at homeless shelters is now in the streets in broad daylight. We are the last to speak for us. If you have not been already, it’s time to start shouting.

[Tiffany Cabán is a former candidate for Queens district attorney and a national organizer with the Working Families Party.]